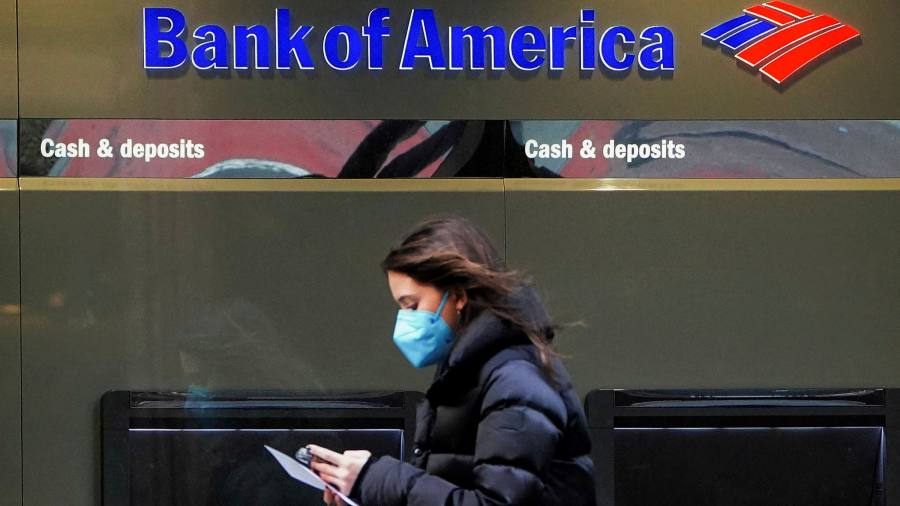 Bank of America gave a bullish revenue outlook as the second-largest US lender reported better than expected earnings and brushed off recession concerns heightened by the war in Ukraine.

The Charlotte-based bank expects net interest income, a closely watched metric that measures the profitability of a bank’s deposits, to jump about 20 per cent in the current quarter, fuelled by higher interest rates and a lending rebound.

BofA, the last of the US megabanks to report earnings, was the only big lender to announce an increase in revenue for the first three months of the year. Total revenue rose 2 per cent to $23.2bn, driven by a 13 per cent increase in net interest income as loans jumped above pre-pandemic levels for the first time. That was broadly in line with analysts’ expectations for $23.1bn.

“Going forward, and with the forward curve expectation of rising interest rates, we anticipate realising more of the benefit of our deposit franchise,” chief financial officer Alastair Borthwick said in a statement.

Banks have been flooded with deposits throughout most of the pandemic, but tepid loan demand over the past two years made it hard for them to find profitable uses for their customers’ cash. In lieu of loan growth last year, BofA began to invest deposits into fixed-income investments in the search for yield but its securities portfolio has begun to shrink.

“[Loans are] always going to be our first choice in terms of investment,” said Borthwick.

However, net income fell 12 per cent compared with a year ago, when earnings were boosted by a $2.7bn release of credit reserves that had been set aside to cover pandemic-related loan losses that never materialised.

Brian Moynihan, chief executive, said on a conference call with Wall Street analysts that deposit levels remained elevated and credit losses were still near historic lows, signalling that companies and consumers had the capacity to borrow more.

“Could a slowdown in the economy happen? Perhaps,” he said. “But right now, the size of the economy is bigger than pre-pandemic levels, consumer spending remains strong, unemployment is low and wages are rising.”

BofA reported earnings amid rising worries that the US could fall into a recession as American consumers contend with the fastest inflation rates in a generation and the war in Ukraine roils the global economy.

However, BofA only added $30mn in credit provisions. At the end of the quarter, the bank had about $700mn in loans outstanding to companies in Russia. Borthwick described its direct Russian exposure as “very minor”.

“All we’re really doing is helping our clients to unwind their existing contracts,” he told reporters. “It’s simply not material to Bank of America.”

The bank’s double-digit net interest income growth offset an 8 per cent decline in fee income driven by a slowdown in investment banking. Trading revenue dropped 7 per cent but came in ahead of analyst expectations owing to a record quarter for BofA’s equities division, where revenues grew 9 per cent to $2bn.