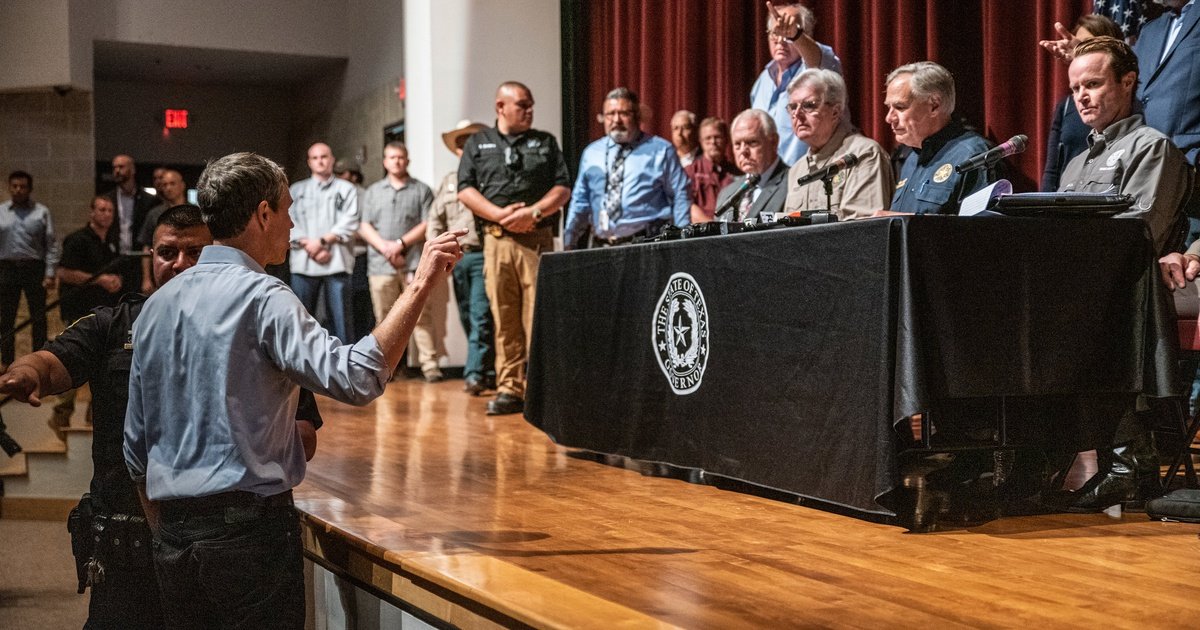 Beto O’Rourke caused a dramatic scene Wednesday when he angrily confronted Gov. Greg Abbott at his the governor’s news conference about the school shooting, yelling, “This is on you.”

O’Rourke, who is running for governor against Abbott, moved to the third row of the Uvalde High School auditorium about 15 minutes after the governor began speaking to the media alongside other state and local leaders onstage. When Abbott concluded his comments and introduced Lt. Gov. Dan Patrick, O’Rourke rose and walked to the stage and spoke directly to Abbott.

“You are doing nothing,” O’Rourke said. “You are offering up nothing. You said this was not predictable. This was totally predictable when you choose not to do anything.”

Some of the Republican officials onstage quickly denounced O’Rourke. U.S. Sen. Ted Cruz told him, “Sit down and don’t play this stunt.” Patrick told O’Rourke he was “out of line and an embarrassment.” And Uvalde Mayor Don McLaughlin gave the most colorful response.

“I can’t believe that you’re a sick son of a bitch that would come to a deal like this to make a political issue,” McLaughlin said.

O’Rourke was eventually escorted out of the room. On his way out, he turned back to address Abbott again.

“This is on you until you choose to do something different,” O’Rourke said. “This will continue to happen. Somebody needs to stand up for the children of this state or they will be continue to be killed just like they were killed in Uvalde yesterday.”

Once the scene calmed down, Abbott called for unity.

O’Rourke became especially outspoken about gun violence in 2019 after his hometown of El Paso was the site of a mass shooting that left 23 people dead. As a presidential candidate, he famously backed a mandatory assault weapons buyback program after the El Paso massacre.

Abbott has relentlessly attacked O’Rourke over that idea in the current race. O’Rourke has said he still supports the proposal but does not actively campaign on it.

As he was escorted out, some attendees in the back of the auditorium shouted that O’Rourke had a right to free speech, and one woman yelled: “Let Beto speak, he has a lot to say!”

Deborah Bond, an activist from San Antonio whose extended family has kids in the school district, said she supported O’Rourke’s comments.

“I’m sick of this,” Bond said. “Guns are the main weapon of choice. Why can’t we have more gun control?”

Erin Douglas contributed to this report.