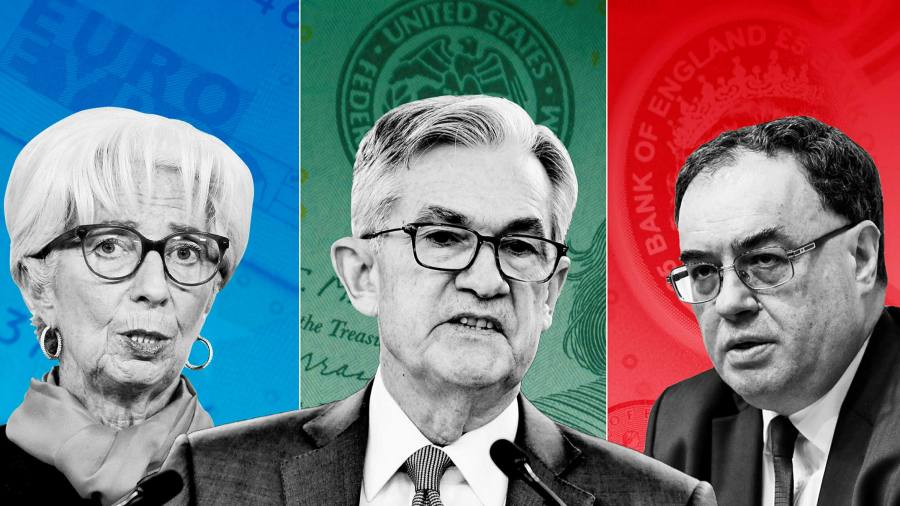 Not many central bankers get to be remembered as being truly great. You rarely see statues paying tribute to deft monetary policy. If the world rapidly manages to escape its current high-inflation, low-growth rut, the leaders of central banks in the UK, US and EU will certainly have earned some recognition. For now, that seems a distant prospect.

There are grounds for thinking central bankers were too slow to tighten over the past year: inflation has been climbing out of the comfort zone for months. But the scale of the current surge in inflation — which stands at 8.3 per cent in the US, 7.5 per cent in the eurozone and 7 per cent in the UK (with an expectation it will hit 10 per cent by year-end) — is largely unrelated to those judgments. Monetary authorities, who think in months and years, have been hit by rapid-fire shocks from supply-chain blockages, China’s zero-Covid policy and Ukraine.

Their challenge now is to bring inflation back into normal bounds in the medium term and to avoid drifting into a cycle where expectations lead to persistently higher inflation rates. It would be easier to tackle this sort of problem, and the higher policy interest rates it demands, amid robust growth. But we are where we are. This is the sort of moment for which independent central banks are built: they must be willing to tighten even as their economies dip.

The US and UK have both started a rate-rising cycle. The Bank of England has set out plans for tighter policy despite also forecasting that Britain is heading into economic contraction. But rate-setting is only part of the answer to the issues central banks now face: they are fighting expectations as well as the present inflation surge — and that is a battle fought through communication.

Last week, Jay Powell, chair of the Federal Reserve, was very clear: “Inflation is much too high and we understand the hardship it is causing, and we’re moving expeditiously to bring it back down. We have both the tools we need and the resolve it will take to restore price stability on behalf of American families and businesses.”

This is a succinct statement. It is the sort of thing that news outlets pick up and communicate in clear language to business and workers that prices will not keep soaring for ever. Yes, he probably overstates his control of events — but he did better than Andrew Bailey, governor of the BoE, this week.

Bailey told MPs that “We have to get [inflation] back to target. And that is clear.” But he also said: “To predict and forecast 10 per cent inflation and say there’s not a lot we can do about 80 per cent of it is extremely difficult”. He admitted that he sounded “apocalyptic” on food prices. This unthinking aside drowned out much of the rest of his messaging. And repeating a call for restraint on pay demands was not only crass, it highlighted his lack of tools.

Bailey’s error is to forget that his job is not just to be an analyst; it is to manage and shape expectations. The UK faces particular inflationary danger. The BoE already expects a longer-running inflation problem than other economies. Its labour market is ultra-tight and price shocks have already spread far from food and energy.

For ECB president Christine Lagarde, the mission is just as clear: keep expectations anchored. It will eventually need to stop stimulating the economy to show it is serious. Its job, though, is a little different. It is more exposed to the war in Ukraine — which will weigh on growth. And the eurozone’s underlying inflation is not as high as in the US.

Monetary authorities have had a bad few months. But the job of central bankers is not just to worry about interest rates or the minutiae of asset sales. Their job is also to persuade and to lead.