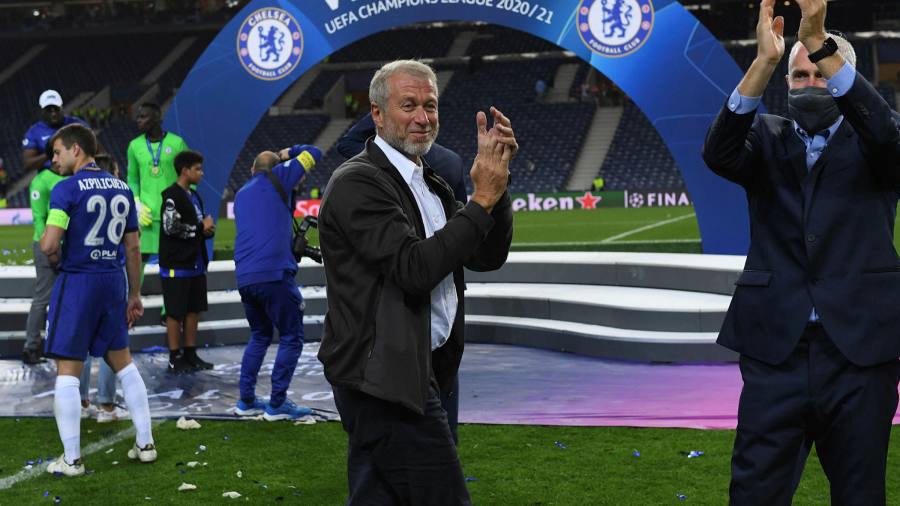 UK government officials are demanding a “legally watertight” guarantee that Roman Abramovich will not lay claim to a roughly £1.5bn chunk of the proceeds from the sale of Chelsea Football Club, funds that have become a key source of tension that could scupper the planned deal.

The club borrowed the sum from a Jersey entity linked to Abramovich during the oligarch’s nearly two decades in charge, bankrolling the acquisition of star players who won the biggest trophies in football for Chelsea.

It is now the sticking point of fractious negotiations between the government and Abramovich’s representatives. The oligarch has previously said he would waive the debt but officials fear a “gentleman’s agreement” is not enough to prevent the Jersey vehicle, Camberley International Investments, from ultimately attempting to be repaid, even if not immediately.

One person close to the sale process denied Abramovich was requesting any of the proceeds be paid to Camberley and insisted that no one would have a claim on the £2.5bn. They said the full amount would go to a charitable foundation that Abramovich intended to set up to distribute the money to victims of the war in Ukraine.

“There’s a game of chicken going on here,” said Julian Knight, chair of the House of Commons’ culture, media and sport committee. “This was never going to be straightforward. Things will go down to the wire.”

Chelsea has a special government licence that allows it to continue operating despite UK sanctions imposed on Abramovich. Those permissions expire at the end of May.

Abramovich needs government approval to proceed with the £4.25bn sale of Chelsea to Todd Boehly, co-owner of the Los Angeles Lakers basketball team, and US buyout group Clearlake Capital.

Boehly and Clearlake are acquiring Chelsea for £2.5bn, with a further £1.75bn committed to investing in the club’s stadium, academy and playing squads.

The £2.5bn acquisition price is due to be paid into a frozen UK bank account from which any transfer would require government approval. Officials are concerned that unless there is a legal commitment to write off the loan, Camberley could seek repayment from the account in the future.

The identities of the ultimate beneficiaries of Camberley are unclear but government officials suspect the Jersey entity is set up for people linked to Abramovich.

If such a repayment was made, it would leave only about £1bn available for the victims of the war in Ukraine, even though a key element of the sale has been to direct funds to a charity to help those who have suffered as a result of Vladimir Putin’s invasion.

One government official said Abramovich had “made public commitments he wouldn’t call the loan in but we need it to be legally watertight. That loan needs to be written off as part of the sale process.”

Abramovich and his allies have denied he wants the debt to be repaid. A spokesperson for Abramovich did not respond to a request for further comment.

Mike Penrose, former chief executive of Unicef UK, told the Financial Times that Chelsea chair Bruce Buck, a longstanding associate of Abramovich, approached him to set up the foundation.

Penrose said the foundation would be independent and that “no one can benefit financially other than the victims of conflict”.

However, government officials are not yet satisfied. “He’s provided us with four pages of information about what they intend to do,” one official said. “That’s plainly not enough. We’ve got to be confident the foundation doesn’t spend money on things linked to Roman Abramovich.”