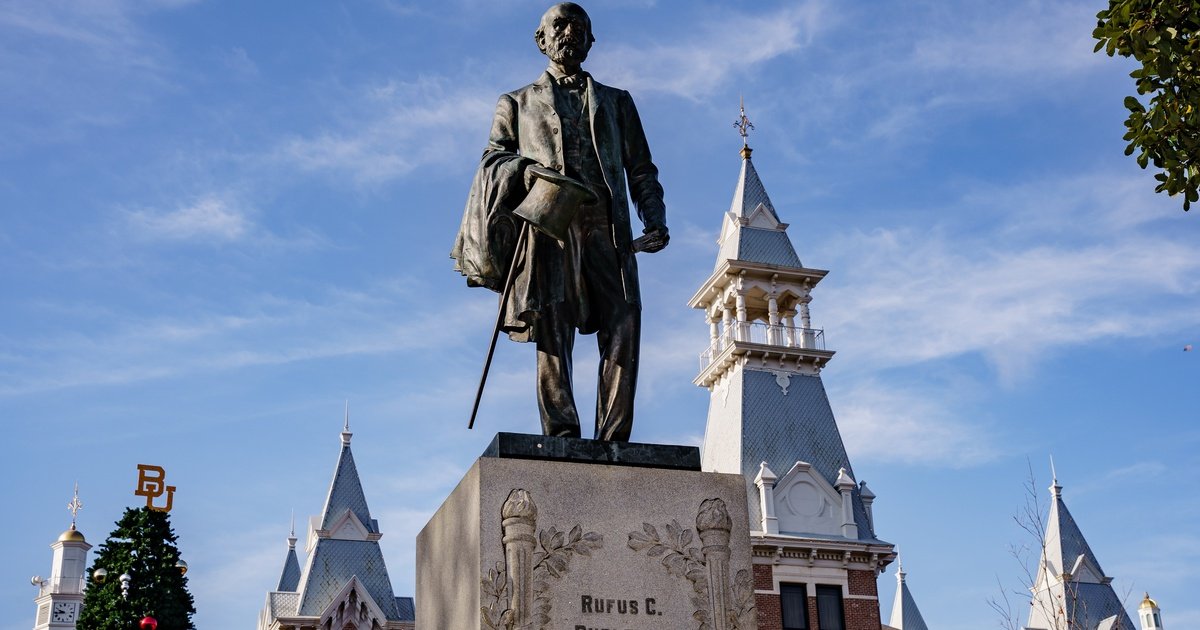 The Baylor University Board of Regents voted Friday to rename a campus quadrangle and relocate a statue of a slave-owning former university president more than a year after a university-commissioned report recommended the changes.

The vote means the school’s Burleson Quadrangle will be changed to The Quadrangle. The school will also relocate a statue of former Baylor President Rufus Burleson from that space and place it in between two academic buildings on campus.

“Our goal at the outset of this process was not to erase Baylor’s history, but rather to tell the University’s complete story by taking an additive approach as we shine light on the past,” board President Mark Rountree said in a statement. “Some of the facts uncovered about the University’s history have indeed been painful, but it is important that we move forward together as the Baylor Family through an intentional process of reckoning, repentance, reconciliation and redemption.”

Burleson not only owned slaves and served in the Confederate army as a chaplain, but he promoted an idea known as the “Lost Cause” theory that said slavery was justified and moral and honored antebellum whiteness.

The board approved a four-step plan to complete a majority of the recommended changes within the next three years. The university will hire a design firm this summer to create a monument for unknown enslaved people who built the original campus and redesign the area around the statue of Robert Emmett Bledsoe Baylor known more commonly as the R.E.B. Baylor statue on Founders Mall.

Baylor, the school’s namesake, was an associate justice on the Texas Supreme Court, a law professor and a donor to the school who was instrumental in its founding.

The Founders Mall and Burleson Quadrangle are close to each other on the 177-year-old campus in Waco.

At Baylor, where Black students make up about 6% of the student body, university officials launched a new scholarship program aimed to help recruit a more diverse student body. School leaders also created a new diversity training video, students and the Baylor Lariat student newspaper’s editorial board largely panned it as “missing the mark.”

Students have also asked the university to remove the statue of R.E.B. Baylor since he was also a slave owner, but the commission report did not recommend that change.

Other plans to redesign the common gathering areas include adding signage recognizing groups and people with historic significance to the university.

The university also plans to relocate two bells from the Burleson Quadrangle back to Baylor’s original campus in Independence, an unincorporated town about 112 miles south of Waco. According to the commissioned report, both bells have a connection to slave plantations. One of the bells was used by founding trustee Aaron Shannon on his plantation “to call his hands together for their daily tasks.”

“These ‘hands’ were likely enslaved people, as Shannon was a slave owner,” the report states.

Baylor President Linda Livingstone said two new statues of the first Black graduates of Baylor, the Rev. Robert Gilbert and Barbara Walker, are expected to be completed and installed by spring 2023.

Livingstone said the university does not have a current estimate of how much all of these changes will cost. She is expected to oversee the entire process; the board also voted Friday to extend her contract through 2032.

The university board of regents had already taken steps to implement a few of the commission’s recommendations, including a request to retire the university mace, which was carried during graduation as students processed in at the start of commencement.

It is made of a sword, two walking canes and the university seal set in wood. The report found multiple objects in the mace had connections to slavery, including one of the walking sticks, which belonged to Sam Houston, who owned 12 slaves. Burleson owned the other cane.

The board decided to retire the mace, which now lives in the Mayborn Museum on campus.

Now, students proceed into Baylor commencement behind a volume of the Saint John’s Bible.

Disclosure: Baylor University has been a financial supporter of The Texas Tribune, a nonprofit, nonpartisan news organization that is funded in part by donations from members, foundations and corporate sponsors. Financial supporters play no role in the Tribune’s journalism. Find a complete list of them here.