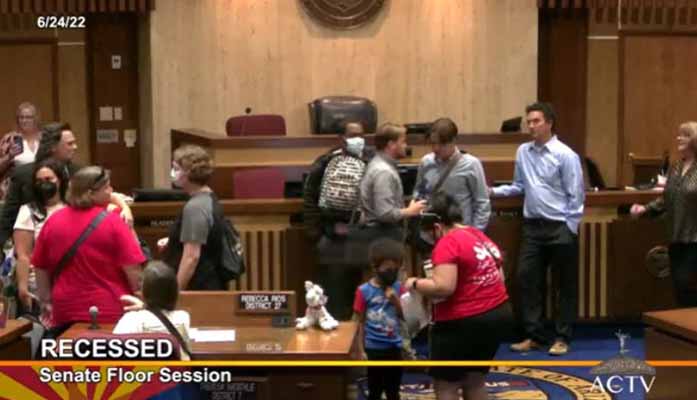 On Friday, at approximately 8:30 p.m., the Arizona Senate was shut down temporarily due to protesters.

A Planned Parenthood protest began at 6 p.m. Friday at the Arizona Capitol – an hour ahead of a protest by the Phoenix Party for Socialism and Liberation and the Phoenix branch of Radical Women.

Breaking: Protestors in the lobby of Arizona Legislature reports of tear gas deployed and personnel being evacuated.

According to sources, DPS troopers used gas canisters and flash bangs to disperse the crowd.

“I am beyond impressed with our DPS officers who responded brilliantly to the attempted breach of security at the Arizona State Senate,” State senator Kelly Townsend told the Arizona Daily Independent. “This is why we do not defund the police.”

Riots at the Capitol caused us to evacuate the Senate floor. Law enforcement contained the crowd with tear gas and we have now moved to a hearing room to finish our business. We will do voice votes. Everyone is safe.

Palm tree apparently on fire after the “mostly peaceful” protests at the Capitol tonight. #azleg pic.twitter.com/ByhRZbR8Of