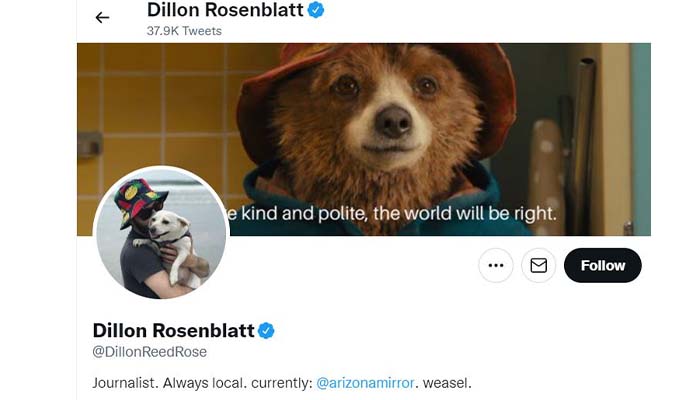 At some point, most people have written or spoken words which were mean-spirited at best, horribly offensive at worst.  Are those prior transgressions reflective of who we are now, and is it newsworthy that someone engaged in disrespectful or immoral -but legal- conduct years ago?

And if a reporter does open the door to someone’s past, is it then fair game to look into the reporter’s past?

Those questions played out in real-time on Twitter starting Tuesday morning after U.S. Senate candidate Blake Masters shared a link to a file containing several screenshots of tweets posted a decade ago by @DillonReedRose, otherwise known as Dillon Rosenblatt, a reporter for States Newsroom’s Arizona Mirror. The tweets included various racist and misogynist comments.

By mid-afternoon, Rosenblatt was fired after the company authenticated the tweets from 2011 and 2012.

Masters told Arizona Daily Independent there was no particular significance in the decision to release Rosenblatt’s old tweets on Tuesday.

“He lied about my past writings. Why shouldn’t I tell the truth about his,” Masters said.

Rosenblatt and Masters had a particularly contentious relationship, over and above the usual uneasiness between reporters and news subjects. Last month, Masters called for Rosenblatt to be fired after the reporter suggested in a May 6 article that Masters had somehow praised Nazi leader Hermann Goering in 2006 by quoting Goering’s thoughts on the subject of government propaganda.

But it was not only the Nazi reference with which Masters took issue. In the article, Rosenblatt also inaccurately described Masters’ position on contraception, which led to dozens of media outlets across the country reporting that Masters wanted to ban access to contraception.

Rosenblatt’s reporting was based on his apparent assumption that because Masters disagreed with a 1965 court decision in a case about reproductive rights then he must also oppose the underlying subject of the case – access to contraception. One headline even incorrectly stated Masters was advocating for a nationwide ban of condoms. But on Tuesday, just hours after Masters’ tweet of Rosenblatt’s own old tweets, States Newsroom issued a statement confirming that an Arizona Mirror reporter had been fired and professing the company has “zero tolerance for racism, misogyny, and any forms of hate speech.

The statement, which not did name Rosenblatt, also noted there would be a thorough review of “this journalist’s conduct” while employed with the company.

“We are committed to holding ourselves and our reporters to the highest ethical standards, learning from our mistakes and producing the type of non-partisan, high-quality journalism that our readers expect,” the statement reads.