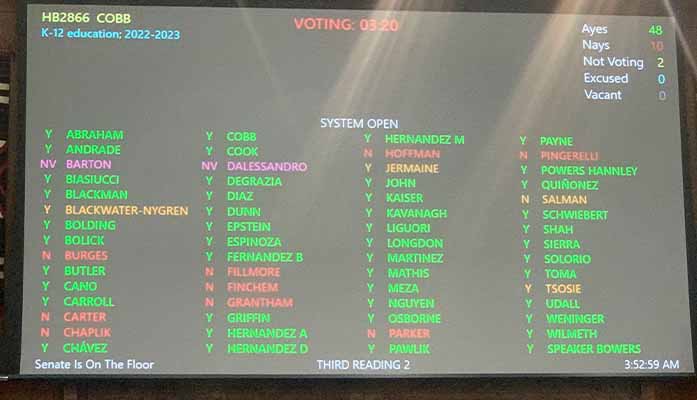 The Arizona Legislature passed the massive FY 2023 State Budget funding bills in the middle of the night. The budget won bipartisan support due to the fact that legislative leaders chose to cut deals with members of the Democratic Party Caucus in order to push it through.

We did it! Passed an historic bipartisan budget that made substantial investments in public education. It’s 5:30 AM, time for sleep. pic.twitter.com/CxwOwsyymw

A handful of Republican legislators voted against the bill.

BREAKING: We have reached a deal on a negotiated bi-partisan budget that features significant new investment in K-12 public education and universities. Voting begins soon. #AZBudget

Proud to be a part of this historic state budget. This goes a long way to solving problems we face as a state – problems of education, infrastructure, debt payoff, water supply, and many more. Not only are we investing in our future, but it’s completely bipartisan. pic.twitter.com/9y2Cz93OaP

Senator Karen Fann told her members this morning at approximately 5:00 a.m., that the Legislature will sine die on Friday.

Well, Arizona has a budget. Leaving the building as the sun is rising. Going to get a few winks and come back for more rule making. sine die on the horizon pic.twitter.com/NsSwS9F1Bc

Over the last eight years, Arizona has made responsible decisions to live within our means, reduce burdensome government regulations and increase trust in our citizens — and the result is a booming economy with record revenues. 1/