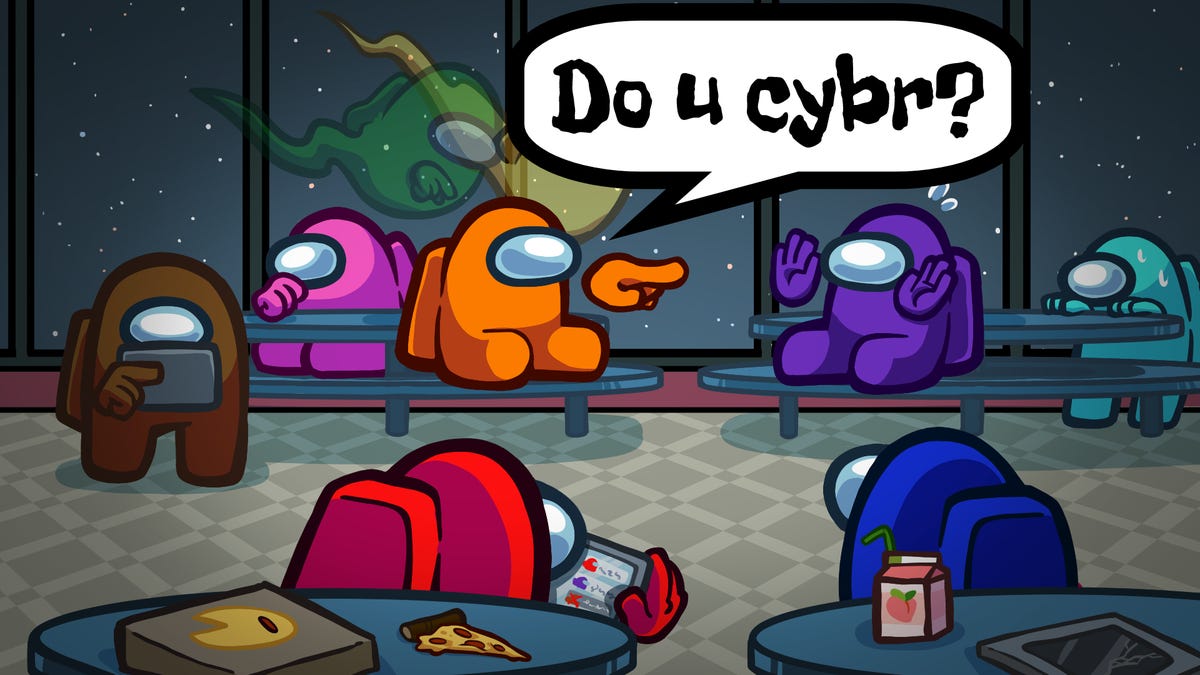 Gamers or not, most people have heard of Among Us. The Mafia-style game from Innersloth grew in popularity at the start of the pandemic, to the point where its merch fills the shelves of every toy store, and still carries a following of devoted players who use their PCs, consoles and mobile phones to make false accusations and call each other sus.

What most might not suspect, however, is that Among Us is now also a conduit for the single and lonely, and a place where underage gamers are exploring cyber sex. However, it isn’t the first of its kind.

Cybering has been around in multiplayer games and chat rooms for decades. It has evolved from online messaging platforms like AOL and MSN to virtual realities like IMVU and SecondLife. Whether the sex is described or simulated, these niches exist within most online communities and especially in gaming.

Rather than pushing the beds together in MedBay, most of the sexual roleplaying in Among Us is done in the lobbies themselves. The pre-game chat feature is the conduit for communication; whether it’s flirtatious foreplay, or getting detailed and dirty. With the lack of official gating to keep children at bay, it raises concerns these could become an arena for underage players to experience online grooming and sexual harassment.

Out of all the rooms I attempted to gain entry to, only one out of 20 people claimed to be over 18.

I can remember my days on Habbo Hotel, my choice of online community as a preteen. This virtual chat room, aimed at young people, has hosted customizable avatars in different public and private rooms for over 20 years. Back in its earlier years, I chose the username Littlexhottie, a title that definitely did not describe me at age 11. At the time, you could not create an account unless you were 16 or older. However, I simply set my birth year back a few years, and was instantly in.

I would load into chat rooms that appealed to my interests, like “Emo Room” or “Anime Clubhouse.” For the most part, those subjects were discussed in the room. But more often than not, fan-ranting would lead into flirtation and explicit messaging.

As an awkward, zitty preteen, I felt completely lovestruck for any user who told me that I was cute. I genuinely believed them, despite the fact that they only had my avatar to base this on. Many of these romantic proclamations would lead to being isolated into a private chat room, and then awkwardly peer-pressured into engaging in cyber sex.

Whether my participation was from curiosity or the fear of disappointing my internet boyfriends, it is very much an uncomfortable memory to look back on. I remember nervously checking over my shoulder as I read messages about getting railed by bluedragon889 on our family computer.

Instances like my own are typical examples of children engaging in sexual exploration, but also highlight the vulnerability and fragility of the safe-guards implemented to keep underage players safe while gaming online. According to Observer Research Foundation data, instances of online pedophilia have nearly doubled in both reports and anonymous tips since the start of the global pandemic.

For the most part, the Among Us’s X-rated roleplay lobbies do make some efforts to restrict whoever comes in, although not by age. If the username doesn’t reflect anything sexual or anime related, players are generally kicked out as soon as they load in. Meanwhile, trying to join any of the StripBakugo lobbies is nearly impossible, unless personally invited or if a player has a great My Hero Academia pun.

Lobbies generally contain about two to three people maximum, and most commonly are just held between two individuals. Conversation topics and courting pacing vary from room to room. Some players are more courteous, asking about age or names rather than jumping straight to the chase. However, the most common chat phrase uttered as an introduction would be, “Snapchat?” While some chats will then progress to a different platform, most players choose to kick out any remaining members and set the lobby to private. However, a few lobbies were happy to have me and others stick around.

Most users I spoke with reported their ages between 14 and 17-years-old. Out of all the rooms I attempted to gain entry to, only one out of 20 people claimed to be above 18.

The younger players generally were searching for boyfriends and girlfriends, while older players stated they were interested in sexual roleplay. One player, who asked that their username remain anonymous, told me they come on once or twice a week, but primarily for roleplay. They rarely play an actual game of Among Us.

The target audience is the main cause for concern regarding this phenomenon. Games with goofy avatars and funny moments are appealing to the mainstream, but especially attractive to children. The cartoonish style astronauts are the familiar mascots of this kid-friendly game. Plushies, toys, clothing and other merch can be found at popular department stores and game shops as well.

The game’s developer, Innersloth, holds a very firm stance on maintaining a gaming environment that is not only enjoyable for all audiences, but safe for child gamers as well.

“One of the features we launched early last year was the implementation of Child Accounts and a related Quick Chat feature. We partnered with SuperAwesome to create and enforce it, a company that specializes in safe digital engagement services and one that is used by other games. Through this, we’ve put in a ton of work to ensure we are COPPA and GDPR compliant,” said Innersloth community director Victoria Chan.

Through this, Among Us implements a system that essentially child-locks players into a Child Account if they are under the age of digital consent in their country; which COPPA defines as 13-years-old in the United States. These account users are only able to play with others that use Quick Chat, the pre-drafted phrase selections that can be used to communicate in-game, rather than typing. This makes communication far less personable, but eliminates the possibility of exposure to sexual lobbies or inappropriate speech.

One player told me they come on once or twice a week, but primarily for roleplay. They rarely play an actual game of Among Us.

Along with the chat feature, usernames in this mode can only be selected through a random generator with user-friendly verbiage. Additionally, parents are able to access and make adjustments to permissions for the accounts, following government approved verification.

“Among Us is also built with safeguards. We have a constantly evolving reporting system and chat/word censor moderation that try to eliminate any harmful or derogatory language. Players can be reported for inappropriate names/chat, and we are proactively addressing anything that people do to try and bypass the filters,” said Chan.

However, that leaves the responsibility of reporting behavior in the hands of the player themselves, and relies on parents knowing about specific Child Account features to implement such safeguards in the first place. While Chan encourages players to report any behavior that negatively impacts the game, players regularly use slurs and hate speech in-game, albeit with some spelling or punctuation modifications to bypass the censors. When I contacted Innersloth again, to ask them to more directly respond to the issues of people using lobbies for cyber raised in this article, they chose not to respond.

Most recently, Innersloth has announced Among Us VR will be released in the holiday season of 2022, allowing players to explore the spaceship from first person perspective and take out crewmates with their own hands. The games are available to add to wishlists on Steam and Meta Quest.

In the end, I let my blue astronaut suitor down easy; I explained our age difference bothered me and that I may be very ugly under my helmet. He accepted this, and we played a few more games together before he eventually met her, surely the one, the beautiful purple astronaut with the cherry hat that joined our lobby.