Abbott ends inspections that clogged commercial traffic at the border 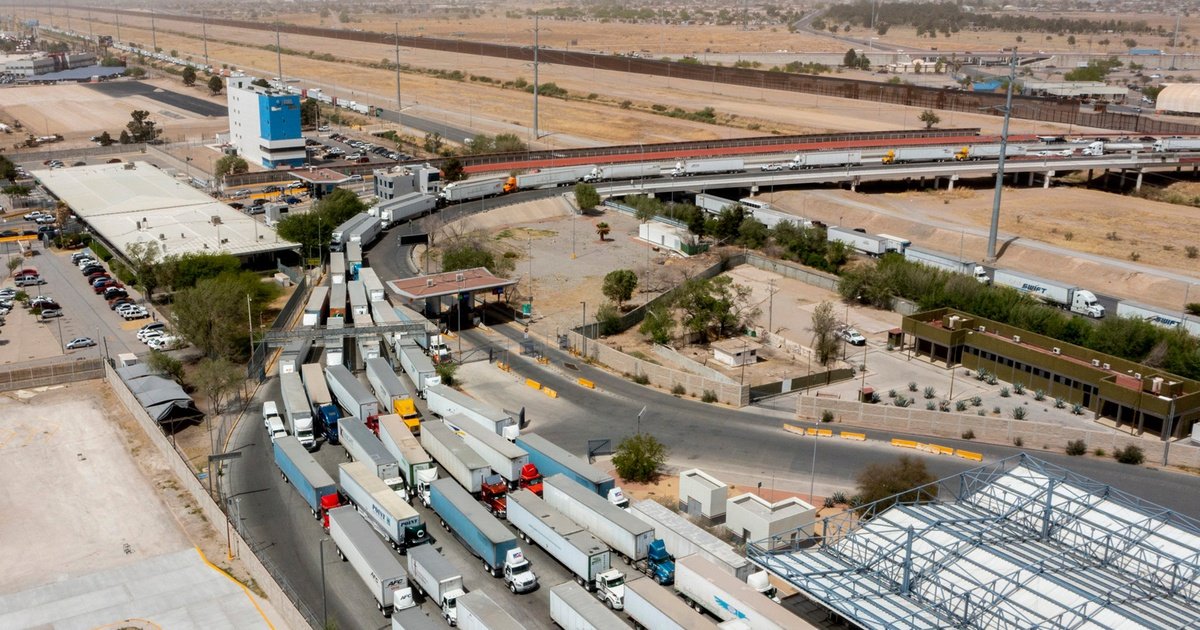 Gov. Greg Abbott reached a fourth and final deal — this one with Tamaulipas’ governor on Friday — to end state troopers’ increased inspections of commercial vehicles at international bridges that gridlocked commercial traffic throughout the Texas-Mexico border for more than a week.

The latest deal should bring trade back to normal after Abbott-ordered enhanced inspections at key commercial bridges caused over a week of backups that left truckers waiting for hours and sometimes days to get loads of produce, auto parts and other goods into the U.S.

At a press conference with Abbott in Weslaco, Tamaulipas Gov. Francisco Javier García Cabeza de Vaca said his state will continue its five-part security plan, launched in 2016, that includes stationing police every 31 miles on state highways, personality and polygraph tests for officers in the state police department, increasing salaries for police officers and offering scholarships for the children of state police officers.

Abbott said the deals with Chihuahua, Coahuila, Nuevo León and Tamaulipas were “historic,” calling them an example of how border states can work together on immigration. But three of the four Mexican governors said they will simply continue security measures they put in place before Abbott ordered the state inspections.

Abbott said he was relying on the Mexican governors to reduce the number of migrants crossing the Rio Grande.

“If those expectations are not fulfilled, and we see an increase or even a continuation of the illegal immigration traffic we’re currently seeing, Texas can reinstate the enhanced security measures for [commercial] vehicles coming across the border,” Abbott said at the news conference with Cabeza de Vaca.

When he announced the initiative last week, Abbott said the goal was to stop illegal drugs and migrants from being smuggled into the state. As of Friday, the Department of Public Safety had not reported any drugs seized or migrants apprehended as a result of the state inspections.

DPS Director Steve McCraw, who was also at Friday’s news conference, said the reason troopers hadn’t found any drugs or migrants in commercial trucks is because drug cartels “don’t like troopers stopping them, certainly north of the border, and they certainly don’t like 100% inspections of commercial vehicles on the bridges. And once that started, we’ve seen a decreased amount of trafficking across bridges — common sense.”

DPS troopers are allowed to conduct only mechanical inspections and those checks have been done after vehicles have already passed through U.S. Customs and Border Protection inspection stations.

Abbott’s critics say the Texas governor’s order was a political ploy to raise his profile in his reelection campaign which has disrupted the economies of Texas and the four Mexican border states.

“A lot of our members are absolutely flabbergasted that this was allowed to happen and that it happened for so long for the sake of border security,” said Dante Galeazzi, president of the Texas International Produce Association. “We feel like we were used as bargaining chips.”

Beto O’Rourke, Abbott’s Democratic opponent in the November election, said Abbott is doing a victory lap for a problem he created.

“Abbott is the arsonist who torched the Texas economy by shutting down trade with Mexico to score cheap political points,” he said. “Now he wants credit for putting out the fire by announcing these ridiculous ‘security agreements.’ Texans aren’t buying it and we’ll never forget the chaos Abbott has caused to our economy and our border communities.”

Adam Isacson, director for defense oversight at the Washington Office on Latin America, an advocacy group for human rights in the Americas, said Abbott may have made a political miscalculation with the inspections.

“This seems like it’s not working out for him. His base is pro-business and anti-immigrant and he has just antagonized business while giving voluntary free rides to immigrants,” he said, referring to another Abbott order that has provided bus rides to Washington, D.C., to transport asylum-seekers who have been processed and released by federal authorities — if they volunteered to go.

At Pharr International Bridge, TVs and computer monitors are key trade commodities, along with produce such as avocados, dates, figs and pineapples. When commercial traffic came to a halt at Pharr, it hit businesses and truckers transporting perishable goods hard.

Some industries, including automakers, need to import and export products back and forth across the border more than once to assemble parts into a finished product.

Guadalupe Correa-Cabrera, a political science professor at George Mason University who studies U.S.-Mexico relations, said she struggled to understand why Abbott would issue a border directive that would inflict so much damage on his own state’s economy.

“Why shoot himself in the foot? Well, he’s not. He’s calculating,” she said. “This is part of a political spectacle because we are in midterm elections and the economy is bad.”

Abbott can take action that would negatively impact the state economy and not have to pay a price for it because voters are already blaming the Biden administration for inflation, Correa-Cabrera said.

“He’ll probably blame Washington for the unrest and anger that this crisis is going to cause voters,” she said. “You have the perfect excuse to run in an electoral year and to support your party in an electoral year but [you generate] the sense that the other party is to blame for the situation.”

In his appearance with the Nuevo León governor on Wednesday, Abbott told Texans who were upset about the clogged border to “call President Biden and tell him to maintain the Title 42 expulsion policy that has been in place for years.”

Abbott’s order came on the heels of the Biden administration’s announcement that by late May it planned to end Title 42 — a rule by the U.S. Centers for Disease Control and Prevention that federal immigration officials have used to turn away recently arrived migrants at the U.S.-Mexico border, including asylum seekers. Launched in the early weeks of the pandemic, it’s aimed at preventing the spread of COVID-19, but Republicans have pushed for its extension, saying it’s needed to keep order at the border.

Can Texas rely on Mexican officials to slow smuggling?

Correa-Cabrera questioned how effective the governors of Nuevo León and Tamaulipas could be in securing the border when their own governments struggle to protect their citizens from organized crime. Since October 2020, more than 70 people have disappeared while traveling on a highway between Nuevo Laredo, Tamaulipas, and Monterrey, Nuevo León.

Last month, the arrest and deportation to the U.S. of Northeast Cartel leader Juan Gerardo Treviño-Chavez triggered gunfights throughout Nuevo Laredo between cartel members and the Mexican military. Cartel members also set 18-wheelers on fire on a key road into the city after his arrest.

On Wednesday farther down the border in the Rio Grande Valley, Mexican news organizations reported that members of a drug cartel had set fire to four 18-wheelers near the Pharr-Reynosa bridge. The McAllen newspaper The Monitor reported that drug cartel members set the cargo ablaze to force truckers to end their blockade in protest of Abbott’s added inspections — which they did soon after.

Cabeza de Vaca, the Tamaulipas governor, has been linked to organized crime by the U.S. Department of Justice, according to Mexico’s attorney general’s office. Mexico prosecutors have also charged him with money laundering and tax evasion. He has denied any wrongdoing.

A few months ago, McCraw, the DPS chief, said Texas “can’t count on [the Mexican government] to help us with security” during a January speech at an event hosted by the Texas Public Policy Foundation, an Austin-based conservative think tank.

Isacson, of the Washington Office on Latin America, said Abbott’s recent agreements with the four Mexican governors may be a short-term political solution but don’t deal with the underlying corruption problems within Mexico’s government.

“If you’re to take this [problem] on for real, you’d be working with the Mexican judiciary, prosecutors and honest detectives and put Mexican officials, security forces and immigration agents in jail,” he said. “But that’s a very heavy political lift, so you just get satisfied with just having a few drug seizures here and there.”

“Punishment of the good guys”

While Abbott’s new inspection program ended on Friday, the impacts on businesses and supply chains are not over, according to people involved in Texas-Mexico trade.

“Even when more trucks start crossing again, they’re going to have to work through product that was distressed and check what product can be salvaged,” said Galeazzi, of the Texas International Produce Association. “For the consumer, for the next five days to two weeks they’re going to experience outages of certain fresh produce items at stores, on menus and at schools.”

But since the increased DPS inspections began, he added, “we had $180 million of fresh produce left on the other side of the border.”

“Governor Abbott is directly responsible for applying these new senseless inspections on our industry as well as the adverse impact they are having on the economy and hardworking Americans, including truckers,” the group said in a written statement.

Some companies over the last week stopped shipping their products through Texas ports entirely and instead crossed goods elsewhere, like through Nogales, Arizona, Galeazzi said.

The trade industry supports border security, Galeazzi said, especially because many farmers live and work near the Rio Grande.

“You can’t have this punishment of the good guys to get to the bad guys,” Galeazzi said. “We saw our industry punished to give attention to another issue. And that’s not right. These are legitimate businesses that pay taxes that employ people of this state that are going to lose millions of dollars.”

Going forward, Galeazzi said, companies that do business across the border will have to untangle the mess the new inspection program created.

“In the immediate aftermath of this, we’ve got to establish some normalcy in our supply chains and we have got to rebuild our customer confidence that Texas is in fact a business-friendly state,” Galeazzi said. “That’s going to be the biggest challenge we’ll have coming out of this.”

Phillip Garcia, a customs broker in the South Texas border city of Hidalgo, said the results of Abbott’s border inspections are likely not what the governor intended.

“It seems all that was accomplished was spoiled fruits and vegetables, delays on all these loads and hardship for the Mexican drivers,” Garcia said.

Sneha Dey and Jason Beeferman contributed to this story.