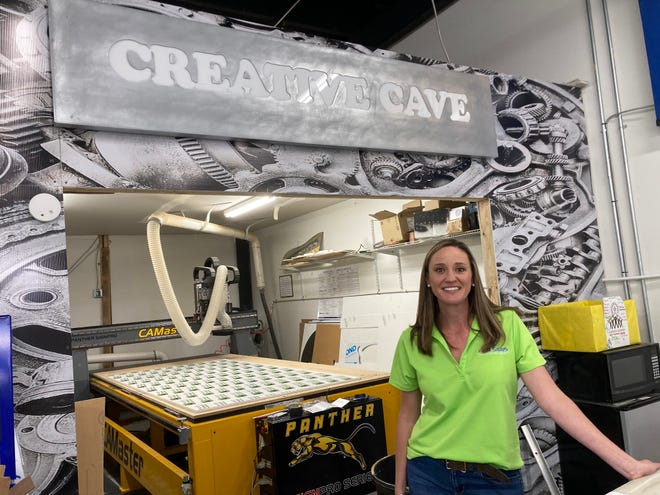 Amanda Blackburn, owner of FASTSIGNS in Hattiesburg, never imagined she would own her own business, much less a sign shop one day.

After years in education, she and her husband Justin Blackburn took a leap of faith and opened their cozy midtown shop in 2017.

“It’s important for people to own new businesses and take their ideas and take a risk,” Amanda Blackburn said. “Because if they don’t, then the industry will die.”

The shop creates custom signs for customers in Hattiesburg as well as across the country, offering graphic design, survey and permitting as well as installation services.

“I think most people don’t realize everything that goes into signage,” Blackburn said, adding that the shop also takes on large projects such as rebranding and murals.

Blackburn, now 39, was 32 when she took the leap to become a business owner. As she sat in her office Friday morning, she reminisced about the good times — and challenges — that came with the process.

“We took a huge risk when we did it. … There were plenty of times, and probably still will be in the future, where we question ‘Did we make the right decision?’, especially in that first year or two.”

“There were many nights where I was just boo-hooing and crying and scared,” Blackburn said. “Did we do the right thing? We invested a lot of money to open this business.”

The Southern Miss alumna said she and her husband spent almost everything they had to open the shop.

“Hard work pays off, but not always. You can work as hard as you want to and fail, but learning from those failures and making steps to correct it the next time is important,” Blackburn said, adding that owning a business is not for everyone.

She encouraged people to develop skills such as bookkeeping and project management before opening a business.

“I think it’s not all glory and ‘Easy Street’ being a businesses owner. There (are) a lot of long hours. There’s a lot of ‘the buck stops here.’ You know everything falls on you. It is your responsibility.”

As a resident of midtown, Blackburn, who is a member of the Midtown Merchants Association and Pine Belt Young Professionals, wanted to open a store close to home and near Southern Miss.

As a member of a community that has supported her over the years, Blackburn feels a responsibility to invest in the community and they sponsor baseball teams as well as local events.

“It’s important for business owners to give back and invest in the community. We want the money that comes through here to recirculate for another organization that’s also doing good in the community,” she said.

Downtown Hattiesburg’s revitalization:Who are the people who are making it possible?