‘You Won’t Be Alone’ is a gory, gorgeous feminist folktale | Movies | Detroit 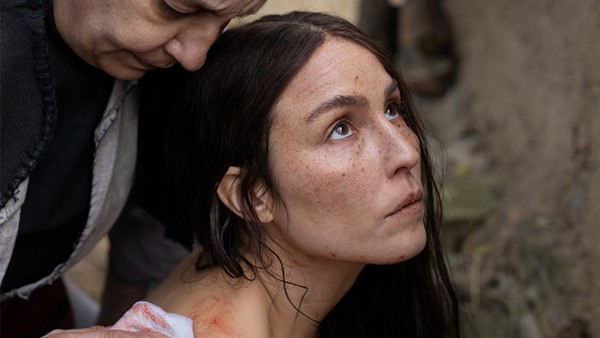 A sky lit with clouds, a canopy of trees, a brook thick with fish you can catch in your bare hands. With its exultant natural imagery and ruminative narrator, Goran Stolevski’s You Won’t Be Alone feels at times like a Terrance Malick film, albeit one clawed through with shocking body horror. Think Julia Ducournau’s Raw set in 19th-century Macedonia with a Tolstoyan penchant for peasant life — peasants who are sometimes mistaken for witches, or, in fact, are witches, as in the case of Nevena, the movie’s deeply introspective, and unlikely, heroine.

The plot is difficult to summarize without spoiling the delightful (and disquieting) twists. A struggling single mother, Biliana (Alice Englert), is visited by Old Maid Maria (Anamaria Marinca), a “wolf-eateress” infamous for feasting on the blood of newborn babes. Vowing to hand her daughter, Nevena, over to Maria when the child reaches the age of 16, Biliana sequesters her in an abandoned cave to shield her from the witch’s return. But when Nevena (Sara Klimoska) comes of age — mute and entirely feral — a dark hawk suddenly flies into her gothic grotto, and it’s clear that her mother’s attempts to save her are futile.

Smuggling the stumbling, slack-jawed teen into the nearby wilds, Maria becomes a mother figure of her own: didactic, sarcastic, and spiteful. When Nevena hurls a stone at her back, it is her first act of genuine agency in a film that, in many ways, is arguably more about female agency, and its extinguishment, than anything else. Abandoned by Maria and left to her own pathetic devices, Nevena drifts onto the property of a village family in which a woman named Basilka (Noomi Rapace) has recently given birth to her first child. While Rapace plays the ostensive lead in the film — one otherwise cast with almost entirely unknown actors — she in fact plays one of an ensemble of characters whom Nevena unwittingly kills and becomes.

That’s right. The hero of the film is also a murderess — and yet a strangely likable one. Shot in rural Serbia — and entirely in an idiom that approximates that of a bygone era — Stolevski’s film is stunning to hear and behold. But for those who flinch at the sight of blood, it may be worth it to squint through more than a handful of scenes. I can’t recall a time that a film so emotionally gutting was also filled with literal piles of guts. This is a film that utterly spills with necromantic entrails, while simultaneously probing the depths of female selfhood.

“With a woman, I am glass,” Nevena reflects, speaking to how women tend to mirror one another’s facial expressions in group situations. “With a man, I am water.” That the men of the village tend to thoughtlessly consume the bodies and creative fruits of their wives becomes more and more apparent the longer Nevena assimilates into various human networks. That she herself often kills and consumes the bodies of those with whom she is in close contact does not prevent her from recognizing how vulnerable she is in female form. Old Maid Maria, too, is as much a victim as villain, and her backstory reveals the brutal extent to which women were blamed — and punished — for any mysterious maladies that befell the larger community.

For all its consciousness of gender inequity — especially violence against women — You Won’t Be Alone doesn’t reductively settle on the stance that men are inherently evil and unjust. If anything, Nevena’s ability to take on the body of different ages, genders and species suggests an endurance of soul distinct from social identity.

And yet within these identities, Nevena reckons with the rigid, often gendered, expectations of the larger human tribe. Is she better off a young woman messily hanging a sodden bedsheet? Or as a man haplessly failing to scythe the field? The fact that Nevena starts out feral directly comments on how each corporeal identity socializes her to assume certain expectations and behaviors, as opposed to some inborn essence. And throughout, she maintains a constant wonder at every shape that she assumes. “Man, oh man, oh man, oh man,” she laughs to herself a half dozen times, incredulous at the dumbfounding complexity of existence. In the end, You Won’t Be Alone seems to say that none of us are alone — that our selves are themselves compiled of so many reincarnated identities.

Like the best folktales — and the best horror movies — the real stakes aren’t with the witch in the woods but in the blood on our hands as very flawed humans. That a subtitled film this weird was even produced in the first place — let alone distributed to theaters across a country renowned for insular viewing habits — feels magical on its own. For those lucky enough to see Stolevski’s latest on the big screen, be ready to squirm but also to marvel. Life is muck and guts and — somehow — it is also teeming with miracles.