Women’s Social Club “The Wing” is Back. With a New CEO and a New Mission. 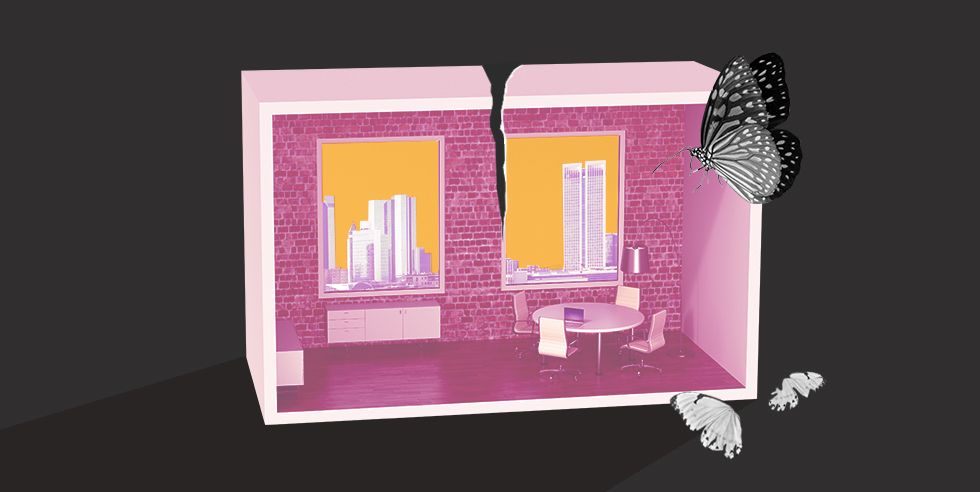 Remember The Wing? Cofounder Audrey Gelman, a political consultant and “it” girl, once described her social-club-coworking-space-crossover as a “women’s utopia,” where girl bosses could gather around terrazzo tables and exchange ideas over turmeric lattes. It felt like a radical concept when it was founded in 2016. Gelman and her partner Lauren Kassan, who came from a fitness startup, carefully cultivated the club’s highly-manicured physical aesthetic (millennial pink; mid-century modern), mission (Instagrammable feminism), and membership—which included a circle of high-profile writers, celebrities, and activists, many of whom paid $3,000 annually for access to The Wing’s various locations and exclusive networking events.

But cracks in The Wing’s shiny veneer started to show in 2019, when reports surfaced about casual racism happening within the club. In August of that year, two Black members said a white guest accosted them over a parking spot outside the club’s West Hollywood location. In a separate incident, one white member purportedly looked at photo board of Wing employees and remarked, “There’s a lot of colored girls that work here.” In an exclusive essay for ELLE, former employee Roxanne Fequiere called out The Wing’s management for remaining “curiously committed to the idea that simply bringing women together was in and of itself the rising tide that would lift all boats,” especially when it came at the expense of employees of color.

At the onset of the pandemic, what was once a budding feminist empire had all but completely collapsed: All 12 of its locations closed down, and Kassan and Gelman announced that 95 percent of the company’s revenue disappeared. By early April, the company had laid off half its HQ staff and almost everyone who worked at the club’s physical locations. Three months later, Gelman announced her resignation as CEO (although she reportedly remained on the board and maintained an ownership stake in the company) amid a staff-led “digital walkout” in protest of the company’s problems.

Two years, one very public reckoning, and a dizzying decline of the #GirlBoss later, The Wing is fluttering once more, this time under the direction of new parent company IWG (a flexible workspace firm founded by English billionaire Mark Dixon) and with Jen Cho, The Wing’s former marketing chief, as CEO. In her first expansive interview since being promoted in February, Cho opens up about her new philosophy for the beleaguered brand—and why she feels getting Wing clubs into suburban areas is a “huge opportunity.”

On being a part of The Wing’s ”comeback story.”

“Were there mistakes that happened? Certainly. Do women need their own type of space to be productive, collaborate, be inspired, [and] build community? The answer to that was also, yes. So when I was looking at the opportunity, I thought that, given my background and the different experience that I brought to the table, this was a really interesting opportunity to solve a challenge. Yes, the brand had gone through some very significant challenges… but was there still a need for a space like The Wing? My answer was yes. And I wanted to be part of that comeback story.”

Why the ”glass cliff” phenomenon was a consideration in taking over as CEO.

“How can I not think about it? It’s my life decision that I’m making. It’s my brand, my reputation. As the [type of] person that looks at all the sides of an opportunity—the good, bad, and the scary—of course I thought about it. But I think I’m also at a point in my career where I’m confident in myself. I know what I bring to the table. I know how to assess an opportunity. I can also see that… this is more of a long game. There is no tomorrow solution. The only thing that I had to make sure with regard to the conversation around the glass cliff is: Did I feel supported by leadership?

I felt I was being given a genuine opportunity. So I thought that that was… I mean, that’s what I needed to hear. I had a list of things that I needed to negate the class cliff of concern. And I’m confident that I have the support that I need.”

A common space at The Wing in Washington, DC.

An in-house cafe at The Wing in Washington, DC.

How missteps by past leadership can create opportunity.

“There were clearly missteps made by leadership, that’s undeniable. It was unfortunate that so many of those mistakes had happened. It seemed the walkout was a progression of a number of things that were already happening. So I acknowledged that there needed to be change.”

Why The Wing founder Audrey Gelman is still ”looped in.”

“I haven’t talked to her directly, but I know Lauren [Kassan, The Wing’s other cofounder, former COO, and current board member] is in constant communication with her, especially when it comes to some of the larger decisions. So I know that [Audrey is] looped in, even though she’s not a decision maker and I think that… speak[s] more to Lauren’s friendship with her. You don’t build a company and then just end your relationship. So I think that’s how she manages her relationship. From a business perspective, since she’s not affiliated with the company, I have not talked to her directly.”

How The Wing plans to make more tangible changes.

“You always have to remember that the conversation is evolving. So, you need to set up a culture [with] a safe place to ask questions… And that starts right at the top…. I think what’s critical is making sure that your insides match your outsides. That’s the first red flag, when it comes to performative work. Before you go out externally, [you have to] make sure that you’re doing all of the things to ensure that your internal team is set up in an inclusive culture, that they have guardrails, safe spaces, training, and the ability to escalate conversations. When there are situations where there are microaggressions or instances of bias, as a leader I ask: ‘How can I create infrastructure in order to eliminate as much bias as possible?’”

Audrey Gelman, former CEO of The Wing, at the Washington, D.C., club location in 2018.

How a new ”culture code” is meant to protect both members and employees.

“It’s a code that every member has to sign, it’s part of our house rules. It… ensures that our members are treating our community teams with respect. It also enforces that internally, as well. All of our team members at The Wing are required to sign the culture code as part of their onboarding process. We also have an escalation policy.

If there is a violation of the culture code, then we will be expelling those members and cancelling their membership. It’s basically like a code of conduct with a little more detail about what we consider to be violations. What we’ve noticed is that in companies, and of course in our spaces, microaggressions don’t necessarily show up as physical altercations. We thought that we needed more language and specificity around that in order to ensure that everyone coming into our spaces and representing The Wing was marching to the beat of the same drum.”

Screening of The Handmaid’s Tale at The Wing in New York City on April 22, 2017.

Distancing The Wing from the term “#GirlBoss.”

“As fast as hashtags rise, the faster they fall. I’m definitely not trying to bring back the hashtag or make that happen. But is it important for women to have more opportunities to sit in leadership? Yes. Is it important for women to see leadership and the opportunity to be entrepreneurs, explore new career paths, and be supported in times of transition? That’s also a yes. I feel the way that we are approaching our new just brand identity is to make sure that we’re going back to our core offering. Ultimately, we’re not a nonprofit, we’re not trying to solve the world’s problems. But can we be part of the solution through our product offering? Yes.”

How The Wing is adapting its co-working structure for the work-from-home era.

“In order to thrive professionally and in an entrepreneurial way, you do need a space where you can be functional, right? A desk where you can sit at and a great conference room, if you want to take a meeting or a Zoom room or whatever that is. So we do provide that. On the community part… I can’t guarantee friendships, right? However, we can set you up for success. We can set up our spaces so that there is collaboration. We can create member events where you can talk to each other. Our space teams are great at understanding where members sit in their journey. Are you looking for a job? Are you starting your own job? Can I connect you to a different member that I know? How can we create organic moments [at the] coffee bar, or professional development opportunities where we can encourage community? There are so many different circles where men get that kind of support. We want to provide the platform for women to have that opportunity as well.”

Why The Wing is looking toward the suburbs.

“I do think there’s a huge opportunity there… We are exploring our own ways to get into the suburbs quicker. Certainly more to come there. There are some opportunities to get to market faster, but I do think that [data] shows the need for co-working spaces like ours that are… more accessible in different ways, from price point to location, to geography, to commute time. The future is bright.”

J.Crew’s $198 Bag Is For You If You Love Celine’s Triomphe

The Best Valentine’s Day Gifts Picked by a Shopping Editor