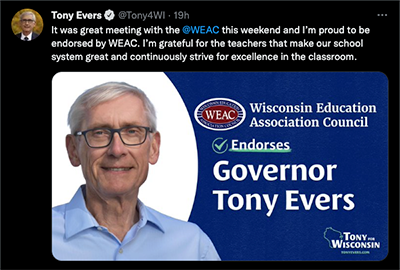 [Madison, WI] – Tony Evers is as tone-deaf as ever in his gubernatorial campaign. Not only is he continuing to accept thousands of dollars in endorsements from the state teachers union, but he is “proud” to tout their endorsement:

It’s a strategy that’s questionable at best, considering how Terry McAuliffe fared after trotting out teachers union president Randi Weingarten towards the end of his losing campaign in Virginia.

Meanwhile, Evers has vetoed bills to give parents more rights, establish school accountability reports, and support child literacy, and Wisconsin families are still reeling from the impact of Evers’ extended lockdowns on schools and businesses:

“Tony Evers will do whatever it takes to keep collecting teachers union dollars, including keeping schools closed and curtailing the rights of parents,” said Republican Party of Wisconsin Communications Director Anna Kelly. “As a lifelong member of the education establishment, it’s no surprise that Evers wants to bolster the rights of teachers union bosses – but Wisconsin parents vote, and they’ll reject his failed education strategy in November.”