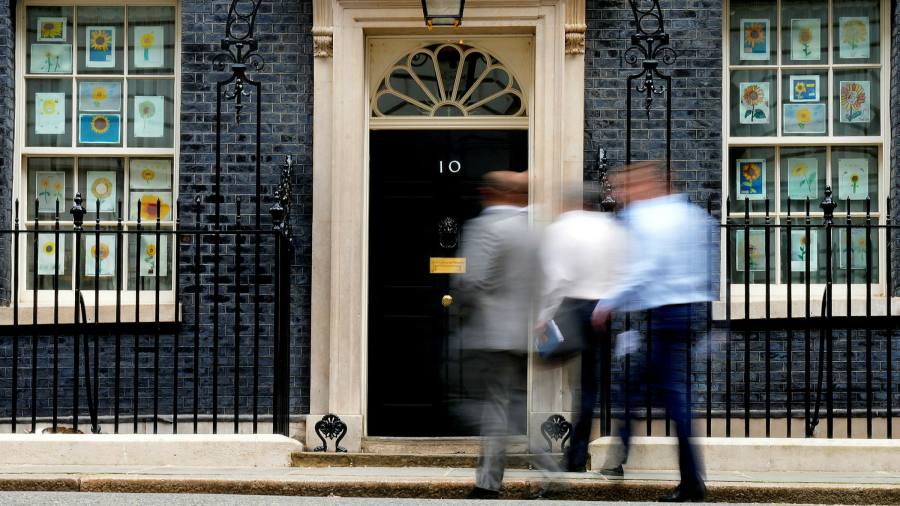 Good morning. During the first lockdown I started having Friday night drinks via Houseparty, the shortlived video messaging service, for the New Statesman politics desk, at 5pm. So it’s official: I am demonstrably a tougher boss than Boris Johnson. Thanks so much for your very kind emails — on this evidence, though, it’s Georgina who needs the sympathy and support. Get in touch at the email address below.

Another day, another set of revelations about Downing Street parties. The Mirror’s political editor Pippa Crerar has obtained a photograph of a table inside No 10 in the midst of a booze-up to celebrate the last press briefing held by senior aide James Slack on November 17 2020 (apparently announced earlier that day with text messages such as “Wine Time Tuesday”). Over at the BBC, Laura Kuenssberg has unearthed further details about life in government buildings for Panorama: you can watch it on iPlayer here or read our write-up here. This is the paragraph that stands out for me:

The event invites for Friday press office drinks were just nailed into the diary,” one individual told the BBC’s Panorama programme. These were known as “Wine-Time Friday” and were often scheduled into the calendars at 4pm, but sources told the broadcaster that it was not unheard of to arrive for work at Number 10 on many days of the week and find “bottles, empties, rubbish” from gatherings the previous evening.

I don’t want to sound like a killjoy, but even if the entire country had not been suffering draconian limits on our freedoms, I just don’t feel like Downing Street officials should be in the habit of having a drink at 4pm on a Friday. If there is any workplace in the UK which ought to have a culture of long working hours and excessive sobriety, it should surely be the centre of government.

Over at the i, Richard Vaughan, Arj Singh and Chloe Chaplain report on the “fury” of some civil servants that they received multiple fines while the prime minister received just one:

Sources present at the events told i there are “dozens” of officials who are furious that they have received fixed penalty notices for attending lockdown drinks inside No 10 when the prime minister did not.

One insider who was present at the leaving drinks for Lee Cain on November 13 2020 said they did not feel they were breaking the rules because of the prime minister’s presence.

One of the BBC’s sources also said they felt they were licensed by Boris Johnson to attend the gatherings, on the basis that he was there, and “was grabbing a glass for himself”.

One important part of the Partygate story is the very simple one that people who set and enforce laws should not break them. But the other important part is what it reveals about the institutional culture at the heart of Downing Street. Officials should not need the absence of the prime minister to tell them that an organisation that orchestrates in-person drinks during lockdown is breaking the law and that if that organisation is doing so at 4pm, they have many other problems to be going on with. And, once fined, they shouldn’t be kvetching that they have received more than one fixed penalty notice while their boss has received “just” one.

An institution’s culture is largely set by its leader and many of these problems are about Johnson. But many civil servants feel that the story exposes Whitehall’s flaws: a culture that tends to clannishness and which discourages whistleblowing to the point that, even when fines are being handed out and you have stories about “Wine-Time Fridays” on the BBC, the official impulse is to circle the wagons.

Rishi Sunak is putting the final touches on a multibillion pound support package to help households with the cost of living crisis. As George Parker and Jim Pickard reveal, it could be unveiled as soon as tomorrow. One aspect that is up in the air is the “how”. The Treasury will be pondering how to introduce something that looks like a windfall tax, while ensuring the Labour party can’t jump and down going ‘they’re doing the thing we said they should do’. There’s also the other “how” of how to get money to households that isn’t just a rise in universal credit.

You can complain about the skewed political incentives around the former, but the latter is more interesting: universal credit is an efficient, well-designed benefit created by this Conservative government. What’s not to love?

The answer, if you’re Rishi Sunak, is that you had a devil of a time getting the temporary increase during the pandemic back and you have decided you aren’t going to risk getting burnt the same way twice. I don’t think we should rule out that the demands of the crisis and the flaws in the other policy levers available to the government mean that sooner or later the government will turn to universal credit. But for the moment, Sir Iain Duncan Smith’s creation remains a victim of its success.

At the moment I am mostly rereading the books on the shortlist for the Orwell Prize for Political Writing 2022, of which I am a judge (the historian David Edgerton is our chair).

They’re all good, thought-provoking books and I would happily recommend any of them. I’m also looking forward to the arrival of a new Star Wars mini-series on Disney Plus this Friday.