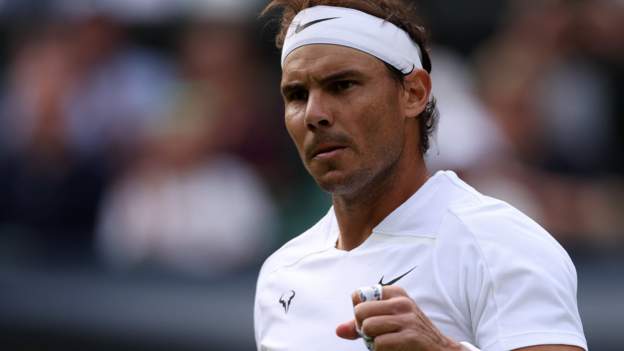 Spain’s Rafael Nadal continued his bid for an improbable calendar Grand Slam by fighting off Francisco Cerundolo to win on his return to Wimbledon.

Nadal, 36, was two sets and break up before the Argentine took the third.

Cerundolo broke early in the fourth but Nadal regained momentum to eventually win 6-4 6-3 3-6 6-4 on Centre Court.

Nadal feared he might have to retire last year because of chronic foot pain but has won Australian Open and French Open titles this year.

The 22-time major champion was also concerned the issue would rule him out of Wimbledon.

Twice a winner at Wimbledon, Nadal had not played at the All England Club since 2019 and received an affectionate reception on what was eventually a triumphant return to Centre Court.

“All the credit to Fran, he started to play great, he was a very tough opponent,” said Nadal.

“For me it was obvious I hadn’t been here for three years on this amazing surface and it is amazing to be back.

“It is not a surface we play very often and I had not put a foot on a grass court in the past three years.”

Nadal needed anaesthetic injections to numb the pain at Roland Garros, saying he “could not and did not want to” continue playing under those circumstances.

But after having radiofrequency ablation treatment – which uses heat on the nerve to quell long-term pain – he decided to travel to London.

The support grew louder as Nadal moved through the gears against Cerundolo, who is ranked 41st in the world but only won his first ATP match on a grass court earlier this month.

The pair exchanged breaks early in the first set before Nadal produced a double fault for a third break point at 4-4.

But he saved that by landing a tricky first serve, went on to hold and that proved pivotal.

Nadal sharpened up as Cerundolo faced the pressure of serving to stay in the opener, taking his second set point after rocking his opponent with a pair of crosscourt backhands.

The pair traded blows from the baseline in the second set, but Nadal’s power was superior and he moved one set from victory with a single break which came in the sixth game.

When Nadal broke for 2-1, a straight-set win looked to be a formality.

But the 23-year-old Argentine instantly broke back and then shocked Centre by taking Nadal’s serve for a 5-3 lead.

The mood turned nervy for Nadal and his fans as Cerundolo clinched the set and then broke for a 2-1 lead in the fourth.

But, with the match looking likely to go to a decider, Cerundolo had a horror of a service game at 4-3.

Nadal used all his experience to pounce and break to love, going on to win the final two games and clinch a hard-fought victory after three hours and 33 minutes.

What else happened in the men’s draw?

The big news in the men’s singles came at the start of the second day when Italy’s Matteo Berrettini, last year’s beaten finalist and one of the favourites, withdrew from the tournament after being struck down by Covid-19.

Eighth seed Berrettini was drawn in the same half as second seed Nadal, meaning they were projected to meet in the semi-finals.

Berrettini’s slot as the opener on Court One was taken by Australia’s Alex de Minaur, with the 19th seed winning 6-1 6-3 7-5 against Bolivia’s Hugo Dellien to set up a second-round match against Britain’s Jack Draper.

Bulgarian 18th seed Grigor Dimitrov had to retire injured from his first-round match against American Steve Johnson, which had been moved from Monday following the delays caused by the rain.

Dimitrov, who reached the semi-finals in 2014, won the opening set 6-4 but was trailing 2-5 in the second when he had to stop.