Why it took so long for a mother to get justice 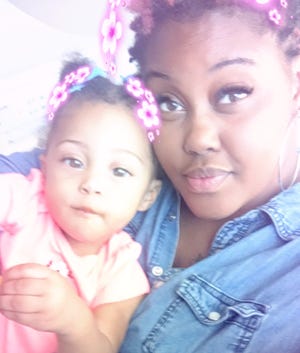 Jurayah was a happy baby with big eyes and chubby cheeks.

“She could light up a dark room,” her mother DeDreuna Smith said.

When she was 14 months old, Jurayah was found dead in her father and stepmother’s home in Claiborne County, Smith said. Her death was ruled a homicide.

Although the couple were suspects, it took one year and six months for them to be arrested and charged, with authorities citing what has become a norm in Mississippi — a backlogged state Crime Lab.

For Smith, the wait was long and agonizing.

When Jurayah’s father and stepmother, 27-year-old Morris Bevily IV and 25-year-old T’Kia Bevily, were taken into custody at the end of April, she finally felt relief.

“It doesn’t make any sense that it took this long while they got to be free,” Smith told the Clarion Ledger.

To people who have lost loved ones to violent deaths, the long wait for indictment may not make sense. But it’s common in Mississippi.

The challenges facing the Crime Lab — a division of the Mississippi Department of Public Safety charged with examining any physical evidence collected for criminal investigations across the state — are well documented.

Howell said the Crime Lab now has the least number of scientists than it has employed in more than a decade.

While it’s recommended that forensic pathologists should not do more than 250 autopsies a year, only two doctors are charged with doing the 1,200 to 1,400 autopsies the Crime Lab oversees a year, he said.

“We are doing the most we can with the resources that we have,” Howell said.

Howell sounds weary when he’s asked to talk about the Crime Lab’s budget.

“Let’s just say, the funding and staffing of forensics in the state has not been a budgetary priority,” he said. “….A lot of this has been said year after year, over and over again. It’s unfortunately not new.”

Jurayah’s last day: ‘I was in disbelief’

“Can you come to the house?” Morris Bevily asked her.

The father was looking after Jurayah, which was something he did every other weekend.

When Smith arrived, he was outside the home, waiting for her. She asked to see her baby. Without saying much, he led her through the house, she said. They walked through a long hallway, past the kitchen, past the living room where his wife was sitting with their young child. In Smith’s recollection, T’Kia Bevily appeared unconcerned.

“She wasn’t crying or anything,” Smith said.

Then they walked into the room where Jurayah was lying in a crib.

“I saw her lying on her back. Her eyes were closed. Her mouth was closed,” Smith said. She knew immediately something was wrong. Her baby never slept with her mouth closed.

“At that time I was in disbelief,” she said. “I didn’t know what to do. When I got myself together I called my aunt and my uncle.”

The next 18 months: Autopsy backlog

Two days later, on Oct. 24, a forensic pathologist laid Jurayah’s body out for an autopsy.

The preliminary autopsy report showed the apparent cause of death was multiple blunt force trauma to the head. The sheriff’s office received the preliminary report back the same day as the autopsy, Howell said.

Then law enforcement waited for a year and a half for the full autopsy report.

Howell said there may have not been a need for law enforcement to wait on the full report because the cause of death never changed.

“I’m not sure why an investigation was held up waiting for the final report when they probably had the information the needed on the day of the autopsy,” Howell said.

It’s possible to indict without the full report, the sheriff said, however it makes more sense to wait for it before it. Davis explained that there’s a risk that the full autopsy report could show a different cause of death from the initial one.

In a case that like, “you’re made to look like a fool because the autopsy does not substantiate what you charged them with,” Davis said.

“The key to all this is, just remember you can only try a person one time for the same crime. Doesn’t’ it make sense to have all the evidence before you charge them and take them to trial?” he said.

In cases like Jurayah’s, while waiting for the full autopsy report, investigators gather evidence and take statements from witnesses, Davis said. They get in touch with people who had been with the child in the days leading up to the death. They ask how long they spent with the child and what they did together.

Sometimes the investigation takes weeks or months, depending on how many people detectives have to talk to and how hard it is to locate them, he said.

Taking into account the wait between grand juries, Davis said a case like this could be indicted within three months — if not for the wait evidence from the Crime Lab.

Arrington, the assistant district attorney, said he doesn’t fault the Crime Lab for the long waits.

“Everybody is doing the best they can, the crime lab, the district attorney’s office, the sheriff’s office. Sometimes it just takes time. Nobody is intentionally causing a delay,” he said.

Calls for ‘Justice for Jurayah’

Jurayah’s mother said it was difficult for her family to see the suspects walking free.

“Patience was really hard. I just had to wait it out,” she said.

Through the year and a half that Smith waited for the suspects to be arrested, she continuously called for “Justice for Jurayah” on social media. She expressed her frustration with the pace of the investigation and local law enforcement.

The sheriff believes his office was unfairly criticized as months went by without an arrest. They were just doing their job, he said, and had no control over the autopsy report once Jurayah’s body was turned over to the Crime Lab.

“A lot of things come into play,” he said. “People don’t understand what law enforcement has to do. The worst part is being criticized for doing your job when you know what you’re doing is right …. Waiting is the hardest part because family on the other side is suffering.”

Smith told her child that her sister is in heaven. They visit her grave often, with flowers and balloons in hand.

“We just sit out there and talk and chill and spend time with her,” she said.”….It was hard knowing I’d never see her again.”

The report came back from the Crime Lab on April 22. The case was presented to a grand jury for an indictment that that same day.

“Justice is here,” Smith posted on social media on April 30, after the suspects turned themselves in.

Showdown:She moved to Mississippi so she could take kratom legally. Here’s why that could end.

More:He was missing from Mississippi — and a database that’s the best shot at finding him

3 injured after overnight shooting in Over-the-Rhine