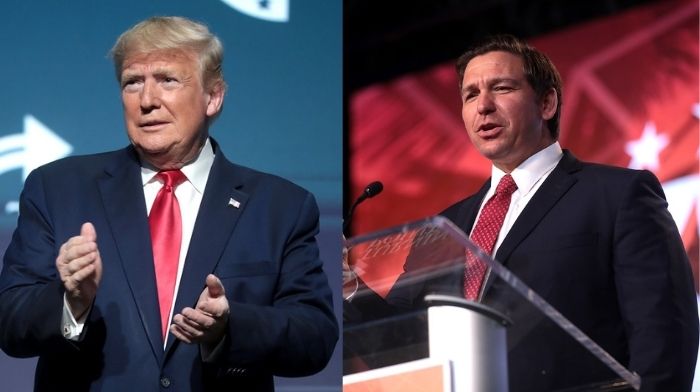 When the field of Republican presidential candidates begins to round out for 2024, one of the things most political junkies, regardless of what side of the aisle they are on, will be watching to see if former President Donald Trump decides to make another run for the White House.

But if the results of a recent poll might indicate, while Trump still leads GOP candidates, others may be nipping at his heels.

They are TERRIFIED of Ron DeSantis.https://t.co/htzp5azM8t

This past weekend at the Wisconsin State Republican Convention, attendees participated in a presidential straw poll.

To the surprise of many, Florida Gov. Ron DeSantis came in first with 38% of those voting.

Former President Donald Trump came in second with 32%. The next closest candidate was former South Carolina Gov. Nikki Haley with 7%.

Equally interesting, the numbers were also split on whether Wisconsin Republicans thought Trump should even run again. Of those participating in the poll, 41% said yes, that Trump should give it another shot, while 32% said no. Twenty-two percent said they were unsure.

Two other fellow Floridians of Trump and DeSantis made a slight showing in the poll. Sens. Marco Rubio and Rick Scott polled at two percent and one percent respectively.

I love both of them but want the one who gives GOP the best chance of defeating the Dem candidate in 2024. https://t.co/IpgOpHsoo6

In the most recent election cycles, Wisconsin has proven to be an important swing state. The 2020 election made that more than apparent.

But the Midwestern state’s Republican insiders may not be the best measuring stick for Trump’s support. In a bit wider look at polling numbers, according to CWS Research polling, in Texas, Trump still comes out at the head of the pack at 45%, DeSantis is at 28%.

The Hill reported earlier this month that among all GOP hopefuls, DeSantis is polling best in a field minus Trump. He leads former Vice President Mike Pence in the most recent Echelon poll 51% to 34%.

Could America Be Looking For New Blood?

Joe Biden is the oldest person ever to assume the office of the president at 78 years old. Should Donald Trump run again and win, we would take office at 77 years old. With Biden becoming President, there has been talk of the aging of the nation’s leadership.

The Wisconsin poll was a small one, limited to the kind of people who go to political conventions, and certainly not scientific. But could the Wisconsin delegates be saying that it might be time for some new blood, the younger generation to step up?

Mike Pence is slightly younger at 62 than Donald Trump. Ron DeSantis is just 43, and is in position to be a rising star within the Republican Party. It is way too early to know exactly who is in and who is out for Republicans in 2024. But we are sure to be in for some surprises.

We are entering a Recession right now. We will be in a Depression by the 2024 Presidential election. Can Americans wait that long to get Joe Biden out of the White House and Presidency?

Domino’s tried to sell pizza to Italians. It failed