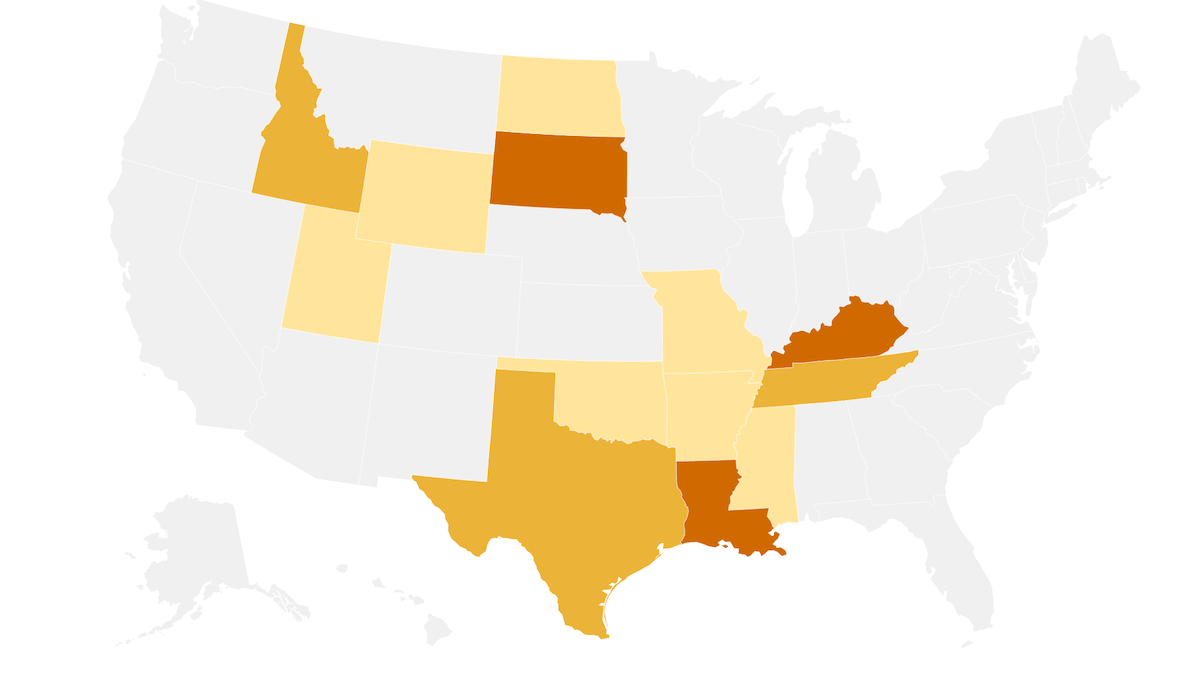 The Supreme Court has ended nationwide constitutional protections for abortion that had been in place for nearly 50 years, leaving the decision to determine the procedure’s legality up to individual states.

The conservative majority issued a ruling Friday to overturn Roe v. Wade, a verdict that is expected to lead to abortion bans and severe restriction in roughly half the states.

At least 13 states, mainly in the South and Midwest, have passed so-called “trigger laws,” legislation effectively banning abortion that is ready to be enforced in the wake of the pivotal U.S. Supreme Court opinion.

Alabama Gov. Kay Ivey, who in 2019 signed into law a near total ban on abortion, said Friday the state will ask a judge to lift an injunction and clear the way for the state to enforce the ban.

The state of Missouri is also acting quickly to enforce a state law banning abortion except in “cases of medical emergency.”

The Arkansas Department of Health on Friday notified the state’s two abortion providers that its ban on the procedure had taken effect under the ruling. Other states that have activated their trigger laws following the ruling are South Dakota, Louisiana, Kentucky and Oklahoma.

Another handful of states have near-total bans or prohibitions after 6 weeks of pregnancy, before many women know they are pregnant. In roughly a half-dozen other states, the fight will be over dormant abortion bans that were enacted before Roe was decided in 1973 or new proposals to sharply limit when abortions can be performed, according to the Guttmacher Institute, a research group that supports abortion rights.

Nearly half of U.S. states already have laws on the books that would ban abortion completely or very early in a pregnancy, before many women know they are pregnant, according to the Guttmacher Institute. The laws fall into three basic categories:

At least eight states have passed anti-abortion restrictions this year: Arizona, Idaho, Florida, Oklahoma, South Dakota, Wyoming, Kentucky and Tennessee. Some of those laws have no exceptions for rape or incest.

Georgia, Iowa, Ohio and South Carolina have 6-week abortion laws that have been previously blocked or struck down by the courts. These states are likely to reinstate those restrictions.

At least two states, Michigan and Wisconsin, have only state laws banning abortion that were passed before Roe and could take effect if the decision is overturned, according to The Associated Press. The governor of Michigan, a Democrat, is suing to reverse that state’s ban.

Another five states — Arizona, Mississippi, Oklahoma, Texas and West Virginia — have both pre- and post-Roe bans on the books, and which one they will choose to observe remains unclear. On Friday, West Virginia’s only abortion clinic decided it would no longer perform abortions.

Pennsylvania has a Republican-led legislature that may try to pass new anti-abortion restrictions. However, the state’s Democratic governor has served a firewall against such legislation.

Sixteen states and the District of Columbia have placed protections for abortion access in state law, though they do take slightly different forms, according to Guttmacher. Colorado, New Jersey, Oregon, Vermont and D.C. protect the right to abortion throughout the entire pregnancy. Twelve other states – California, Connecticut, Delaware, Hawaii, Illinois, Maine, Maryland, Massachusetts, Nevada, New York, Rhode Island, and Washington – have passed laws to protect the right to abortion prior to viability.