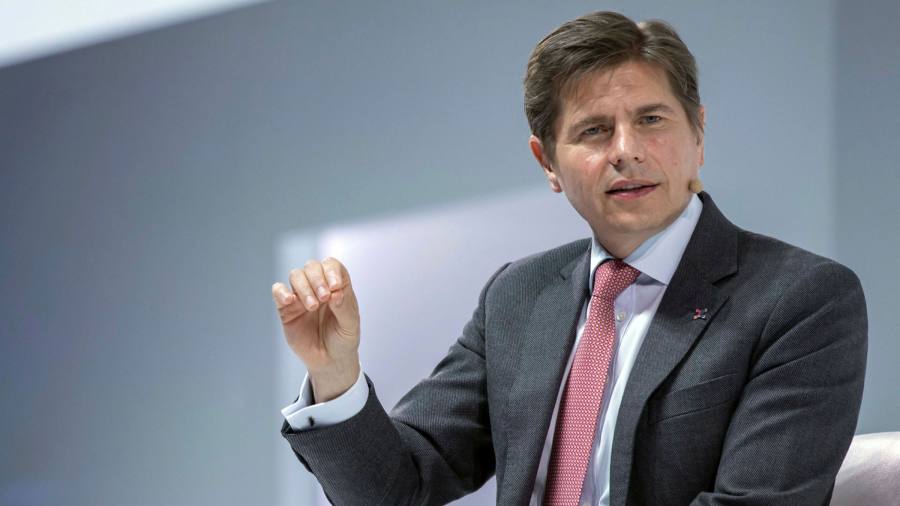 Next week, at the first in-person World Economic Forum in two years, Nicolas Aguzin will attempt to persuade executives and officials that China is open for business.

The chief executive of the Hong Kong stock exchange — a former JPMorgan banker and its first non-Chinese boss — was brought in one year ago to accelerate the integration of China’s economy with international finance.

“The core objective of everything we’re trying to do is to make sure that we continue connecting China and the world,” Aguzin told the Financial Times. “I’m not saying it’s an easy agenda, [but] that’s what we have to do.”

But since he took over, decoupling between China and the US has intensified. Growth in China is being strangled by lockdowns to achieve “zero-Covid” as Beijing is pursuing a regulatory crackdown that has wiped trillions of dollars from companies’ market value and resulted in a global retreat from Chinese stocks.

“He is a victim of circumstance,” said a person close to the HKEX board. “The charitable way of interpreting it is to say he’s been prevented from getting started — another way is saying he hasn’t achieved very much.”

The plan to reinforce HKEX’s role as the bridge between east and west has been “defeated for the time being because of the hardening by the US towards China”, the person added.

After being cut off from the international financial community since early 2020 — Hong Kong only lifted restrictions on non-residents to enter the city in May — Aguzin will lead the HKEX delegation in Davos alongside Laura Cha, its chair and a veteran Hong Kong businesswomen.

For Aguzin, who does not speak Mandarin, maintaining a good relationship with Beijing means leaning on HKEX chair Cha, who was a vice-minister of finance in Beijing in the early 2000s.

“HKEX is a very political place,” said a senior financier in Hong Kong who is an acquaintance of both Aguzin and Cha. “I don’t know if anyone is going to do that job well, there are a lot of people you have to keep happy.

The Davos trip comes after Aguzin made his first visit to mainland China as HKEX chief executive in March. He was called to Beijing as President Xi Jinping’s government prepares to further open China’s capital markets and works to invest up to $50tn of household assets outside its borders.

Aguzin, an Argentine who goes by his childhood nickname “Gucho”, said that Beijing officials expressed “significant interest in making sure Hong Kong is plugged into the international market” during his visit.

That means preserving the ties between the world’s two largest economies, said Aguzin. “Everything we’re doing today is to try to avoid these forces that we’re seeing of . . . technology decoupling and trade also stopping. No interaction [between China and the west] cannot be good for anyone.”

Worsening tension between China and the US, aggravated by the war in Ukraine and the threat of sanctions, have strained Hong Kong’s role as a financial intermediary between the two superpowers.

“The geopolitical environment is very sensitive right now,” Aguzin said. “The combination of geopolitics [and] the pandemic has made being the bridge a little bit harder.”

HKEX reported its worst quarterly profit in two years in March. Hong Kong’s total equity fundraising in the first quarter fell 90 per cent from a year ago to the lowest level since the global financial crisis, while the market value of HKEX has fallen by around a quarter — or roughly $19bn — since Aguzin took over last May.

“They should have done much more over the last 30 years to promote Hong Kong as the Asian financial hub and not just a mainland Chinese financial hub,” said David Webb, a former HKEX board member.

But, he added, “it’s never too late, and they do seem to be realising they’re overexposed to one economy.”

Attempts to diversify have included a failed bid to buy the London Stock Exchange in 2019 under Aguzin’s predecessor, Charles Li.

This year, Aguzin secured the IPO of yachtmaker Ferretti, the first Hong Kong-listing by an Italian company in more than a decade, though it raised just $243mn and its shares are trading below their listing price.

In the past, the concentration on China was not such a problem. “I never lose any sleep if we don’t have a lot of international listings,” said a former executive of HKEX.

That model is being tested by deteriorating US-China relations and Beijing’s regulatory assault. A push by Aguzin to internationalise HKEX through a foreign acquisition would probably be complicated by the risk of US sanctions for any target company, according to people close to the exchange.

HKEX’s governance, which includes several political appointees of the Hong Kong government, has hindered talks on foreign expansion in the past, according to one of the people.

“I’m not going to close my eyes to any international opportunity,” Aguzin said, “but I also recognise that it’s really difficult to do.”

Hong Kong has not benefited from an expected boom of deals redirected from the US after Beijing launched a cyber security probe into ride-hailing app Didi Chuxing soon after its New York IPO. A year later, it is not clear if Beijing will give a green light to Hong Kong listings of Didi or other companies with sensitive data.

The souring market sentiment towards China has resulted in a “listing traffic jam”, according to the second executive close to the exchange. Around 150 companies — all but four of them from Greater China — have been granted a greenlight by HKEX but have not yet gone ahead with listing their shares, according to data from Dealogic.

“If you try to project what’s going to happen in the next three or four months or even the next year, it’s going to be very, very challenging,” Aguzin said, citing the “soft” valuations in tech stocks and the IPO slowdown. “But if you look at the next five or 10 years, the opportunities are massive.”

Seizing the opportunity requires reform, said Aguzin. HKEX has been criticised for its famously high barriers to entry, such as minimum profit requirements, that make its listings more expensive and time-consuming compared to New York or London.

In January, HKEX changed rules to make it easier for Chinese companies listed overseas to conduct secondary share sales and opened the exchange to Spacs. However, the reforms were “cautious”, according to a person on one of HKEX’s advisory boards, noting that Spac listings in Hong Kong were far more onerous than rival exchanges.

Aguzin is also facing pressure in the UK where the Financial Conduct Authority is investigating a fiasco at the London Metal Exchange — which is wholly owned by HKEX — that left the world’s main nickel market suspended for days.

It is another headache for Aguzin as he travels to Davos to salvage a difficult year in charge of the Hong Kong exchange, but he is clear about his mission.

“What I want to make sure is that we can just maintain that connectivity,” he said. “I’m not looking for the statue of Gucho.”