Unveiled and Furious: How Iran’s Women-Led Protests Cut to the Heart of National Identity 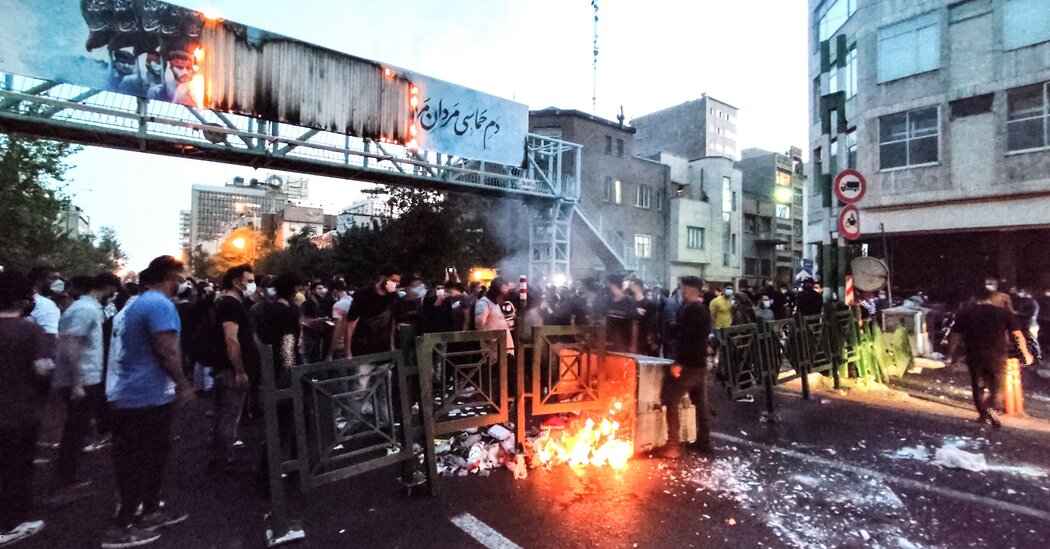 Long before protests started spreading across Iran last month, the hijab — the Islamic head scarf that Iranian law requires women to wear in public, along with loose-fitting modest clothing — had been at the center of conflicts over national identity, religious authority and political power for decades.

Worn by mandate, the veil has long served as a reminder of the Islamic Republic’s power. But now, stripped off and waved in furious protest by young women, it has come to symbolize the gulf between the population’s demands and what the government is willing, or even able, to provide.

Enforcement of the modesty laws was the apparent reason the country’s morality police arrested Mahsa Amini, a 22-year-old Kurdish woman, several weeks ago. The police claimed that Ms. Amini had collapsed suddenly from a heart attack during mandatory training on the hijab rules while in custody. But when a video and photo of her in the hospital in a coma, bruises on her face and blood dripping from her ear, were shared online, they quickly went viral — and provoked fury. After she died a few days later, the protests exploded into the largest mass demonstrations Iran has seen for years.

But this was much more than anger over a tragic, scandalous death. The protests, led by women, have galvanized a broad swath of Iranian society to rise up in one of the most significant political movements that the Islamic Republic has seen since its founding in 1979.

Ms. Amini’s death was the spark for the protests. But the tinder that turned them into a conflagration was a series of changes that has been playing out for decades in Iran, leaving the hard-line government increasingly out of step with the demands of the population.

The politicization of the veil began not with the Islamic Republic’s law mandating it, but with a far earlier law prohibiting women from wearing it in public.

More on the Protests in Iran

In 1936, Reza Shah Pahlavi — the father of the shah deposed in the 1979 revolution — barred women from wearing the veil, or hijab, in public, in an effort to Westernize Iran. Women who wore the veil in public could have it forcibly yanked off their heads, which effectively confined many religious women, and those from conservative families, to their homes, said Mona Tajali, a professor of international relations at Agnes Scott College in Georgia and the author of “Women’s Political Representation in Iran and Turkey: Demanding a Seat at the Table.”

That law was so unpopular that it lasted only a few years. But it was enough to cement the hijab as a symbol not just of religious identity, but also of battles over national identity.

After the revolution, the hijab once again took center stage in Iranian politics, now as a symbol of the new government’s Islamic identity.

“These ideologies, they play themselves out on women’s bodies,” Dr. Tajali told me. Unveiled women had symbolized the secular, Western character of the shah’s regime. Now, veiled women would symbolize the Islamic national identity of the new, post-revolution Islamic Republic.

Forced veiling, it’s important to note, was unpopular with many Iranian women from the beginning. One of the first major post-revolution protests occurred when women demonstrated against a mandatory hijab law. It was not until years later, after the Iran-Iraq war had allowed the government in Tehran to consolidate internal power in the face of an external enemy, that new modesty rules were put fully into place.

“Compulsory veiling becomes law, but it also becomes a part of the central identity of the Islamic Republic,” said Narges Bajoghli, a professor of Middle East Studies at Johns Hopkins University and the author of “Iran Reframed: Anxieties of Power in the Islamic Republic.”

Veiled women became a visible symbol of the government’s level of control over society — black-clad personifications of state power.

But the veil requirements may have helped to set Iran on the path to the current protests in an unexpected way: by making conservative families more comfortable allowing their daughters to go to university.

“All of a sudden, in their minds, society had become Islamic, and therefore it was safe for their daughters to leave home and go away for college,” Dr. Bajoghli said. Today, women make up more than half of university graduates.

Education opened new opportunities for women to enter public life. And that, in turn, led many to become dissatisfied with the limitations that they found there, such as rules that barred women from holding senior judgeships. “In the mid-1990s and 2000s, there’s a lot of folks from within the religious components of society beginning to say, ‘We need to rethink these laws because it’s beginning to impact our peers,’” Dr. Bajoghli said.

At the same time, the country was going through important political changes. In the early days of the revolution, Ayatollah Ruhollah Khomeini was very popular, and his hard-line faction easily found a wide base of support among the population, Dr. Bajoghli said. But his successor, Ayatollah Ali Khamenei, who took office in 1989 and is Iran’s current supreme leader, was less popular and less respected as a cleric.

To shore up his power, Ayatollah Khamenei worked to build a base of support among the country’s ultrareligious conservatives. But over time, as Iran has become a younger and more urban country, that base has grown smaller and shattered into competing factions, Dr. Bajoghli said.

Today, the ayatollah is 83 years old and reportedly in poor health, raising the prospect of a succession struggle in the near future. And while he is still believed to have the support of Iran’s powerful and heavily armed Revolutionary Guard Corps, as well as many of its paramilitary militias, the reaction to Ms. Amini’s death has highlighted the growing dissatisfaction that even elite supporters of the Islamic Republic may have with his hard-line approach.

“Religious folks who are supportive of the Islamic Republic are coming out and saying: ‘Why are we doing this to our children? This doesn’t make sense anymore for this religion, for this generation,’” Dr. Bajoghli said, noting that Hassan Khomeini, a grandson of Ayatollah Khomeini, had issued a public statement supporting Ms. Amini and calling for the government to engage in dialogue.

That has left Iran’s hard-line faction in a political bind: It faces not just a shrinking political base, but also one that is increasingly out of step with society. The authorities have responded with intensifying violence in an effort to crush the dissent, apparently unwilling to allow any alternate vision of Iranian identity.

Mahsa Amini was Kurdish, and the slogan adopted by protesters, “Women, Life, Freedom,” originated with Kurdish militants. Voiced by the youth of Iran, it conjures a vision of a society that is more equal not just along gender lines, but ethnic ones, as well, Dr. Bajoghli said.

The danger of imbuing restrictions on women’s bodies with such potent political symbolism, it turns out, is that women will seize that symbolic power for themselves. For decades, women’s veiled heads have embodied the state’s pervasive authority. But now, the young women of Iran are calling the regime’s authority into question with every uncovered braid.

El Salvador: The people caught up in the gang crackdown