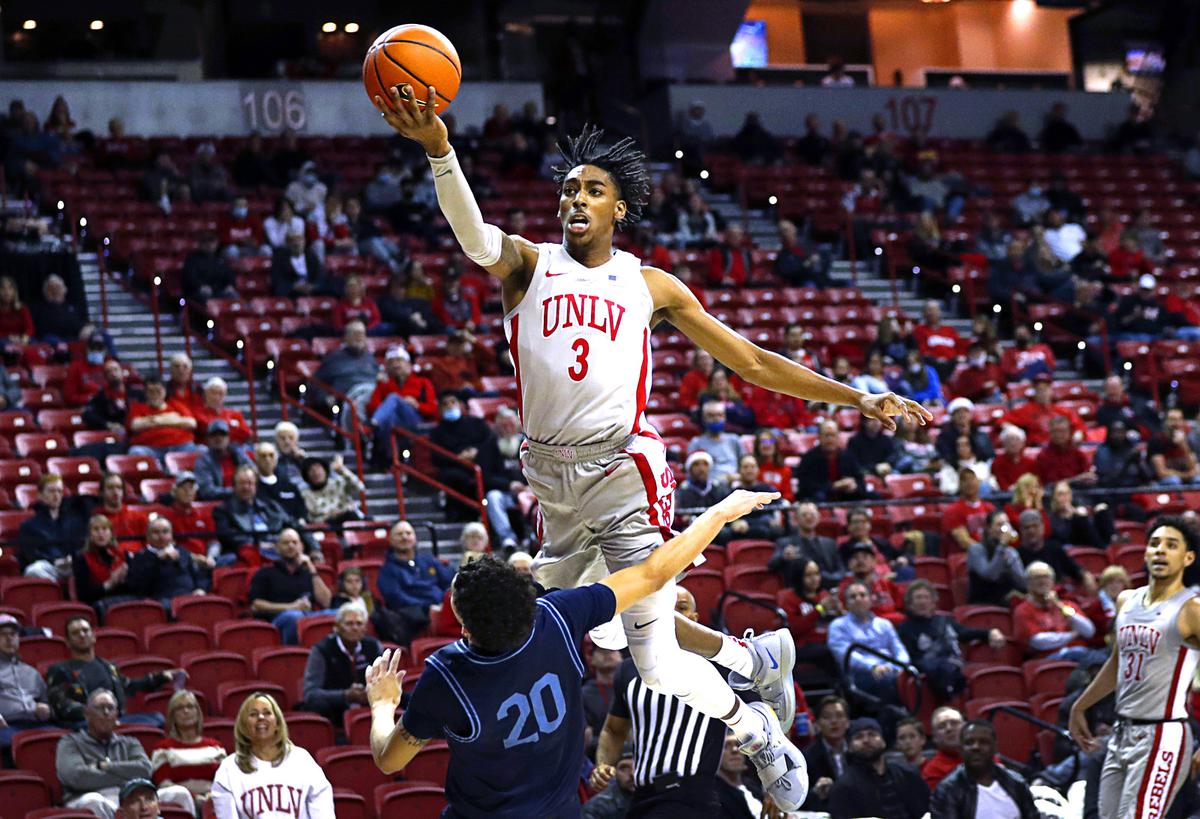 UNLV Rebels forward Donovan Williams (3) lays up the ball over San Diego Toreros guard T.J. Berger (20) during the first half of an NCAA basketball game at the Thomas & Mack Center Wednesday, Dec. 22, 2021.

Donovan Williams is hoping for a yes.

That word is all that is standing between the UNLV junior swingman and his lifelong dream of playing in the NBA.

Williams recently declared for the draft, and he knows he has doubters. The 2021-22 season was the first time in his college career Williams received significant playing time, and he posted 12.7 points and 3.3 rebounds per game — relatively modest stats for an NBA prospect.

The next six weeks will serve as an extended audition period as Williams tries to get pro scouts and decision-makers on board.

So, will he return to UNLV for his final two years of eligibility, or will he remain in the draft?

It’s going to come down to that word.

“If enough teams say yes,” Williams says. “If they say ‘We want to look at him in the first round,’ or if teams say ‘We like him in the second round’ or ‘He’ll benefit from another year in school, we want him to go back and see him do A, B and C,’ then I can go back to coach [Kevin] Kruger and see if we can work that in without taking away from the team goals. So it’s really whatever the teams say.”

The fact that Williams was able to put himself on the draft radar at all this season is a testament to his progress as a player. A former 4-star recruit out of high school in the Class of 2019, he committed to Texas but logged just 10.7 minutes per game in his two years with the Longhorns. That led Williams to the transfer portal, and he found a home at UNLV.

Playing under first-year head coach Kruger, Williams was asked to man multiple positions throughout the season. He made the most of his opportunity and showcased himself as a versatile defender and surprisingly accurate shooter, as he made a team-high 43.6% of his 3-point attempts.

Still, the NBA was a speck in the distance until a mid-season hot streak during which Williams scored in double figures in eight straight games (averaging 20.4 points per contest). Unfortunately, a knee injury derailed him for much of the second half of the year, but Williams had proven to himself that his NBA goal was a real possibility.

“It’s always been a dream of mine and something I always wanted to do,” Williams says. “When I came to UNLV, … we had a goal to do that. And then as we went through the season, there was that stretch where I was playing really well, right before my injury, when I started thinking maybe I’d have a good chance.”

When Williams returned on a full-time basis toward the end of the year, he says he pushed his pro aspirations to the back burner and focused on helping the team as UNLV pursued a long-shot postseason run.

That ended March 10, when UNLV fell to Wyoming in the quarterfinals of the Mountain West tournament. Williams went for 20 points on 7-of-13 shooting in the loss, and on March 29 he announced his intention to test the draft waters.

Under NCAA rules, an underclassman is allowed to enter his name in the draft, go through the pre-draft workout process and solicit feedback from NBA teams before making a final decision. Williams has until June 1 to decide whether he wants to stay in the draft or return to college. The draft is set for June 23.

The NCAA allows players to sign with certified agents as they navigate the draft process; Williams is currently represented by Seven1 Sports and Entertainment, a company owned by former NBA All-Stars Tracy McGrady and Jermaine O’Neal. While Williams works with trainers to build muscle and increase his flexibility and explosiveness, his agents are working to secure an invitation to the NBA Draft Combine, which begins May 16 in Chicago (or, failing that, a ticket to the G-League Elite Camp). There are also individual workouts to coordinate, as teams will most likely want to bring him in for personal inspection.

Williams figures to do well when it comes to pre-draft measurables. Though he’s on the thin side, his 6-foot-6 frame has plenty of room for added muscle, and his 6-foot-11 wingspan gives him positional versatility.

Williams sees that flexibility as something that will intrigue NBA teams.

“The biggest thing I’m selling to teams is that I can guard 1 through 4 realistically in the NBA,” Williams says. “I can knock down open shots on the perimeter, I can create off with the ball in my own hands, I can finish in transition. Every team is looking for players who can do multiple things.”

Williams says his agents compare him to Phoenix Suns wing Mikal Bridges, a 6-foot-6 former No. 10 pick in the 2018 draft who has developed into a key two-way contributor for one of the NBA’s best teams.

“Mikal Bridges is a perfect example of what I can bring to an NBA team,” Williams says. “That’s why my agency is prioritizing transforming my body, so I can show durability. Mikal is one of the few players who’s played every game since he came into the NBA. For me, that is the model.”

Of course, there is always the chance that NBA executives don’t see the next Bridges when they evaluate Williams over the next six weeks. And Williams understands that. If coaches and general managers believe he needs more seasoning, he is willing to come back to school to work on his game.

If he does decide to return, Williams says he’ll eschew the transfer portal and stay with UNLV, where he continues to have a strong relationship with Kruger.

“It would absolutely be UNLV,” Williams says. “There’s nowhere else I would want to play.”

Williams hasn’t shown up on any mock drafts yet, but he’ll have every opportunity to pump up his own draft stock once he gets in front of NBA personnel on the workout circuit.

All it takes is one decision-maker to see the potential and say yes.

“It’s a hard decision for someone who’s 18 to 22 years old to have to make,” Williams says of his impending choice between college and the NBA, “but it’s a good problem to have.”