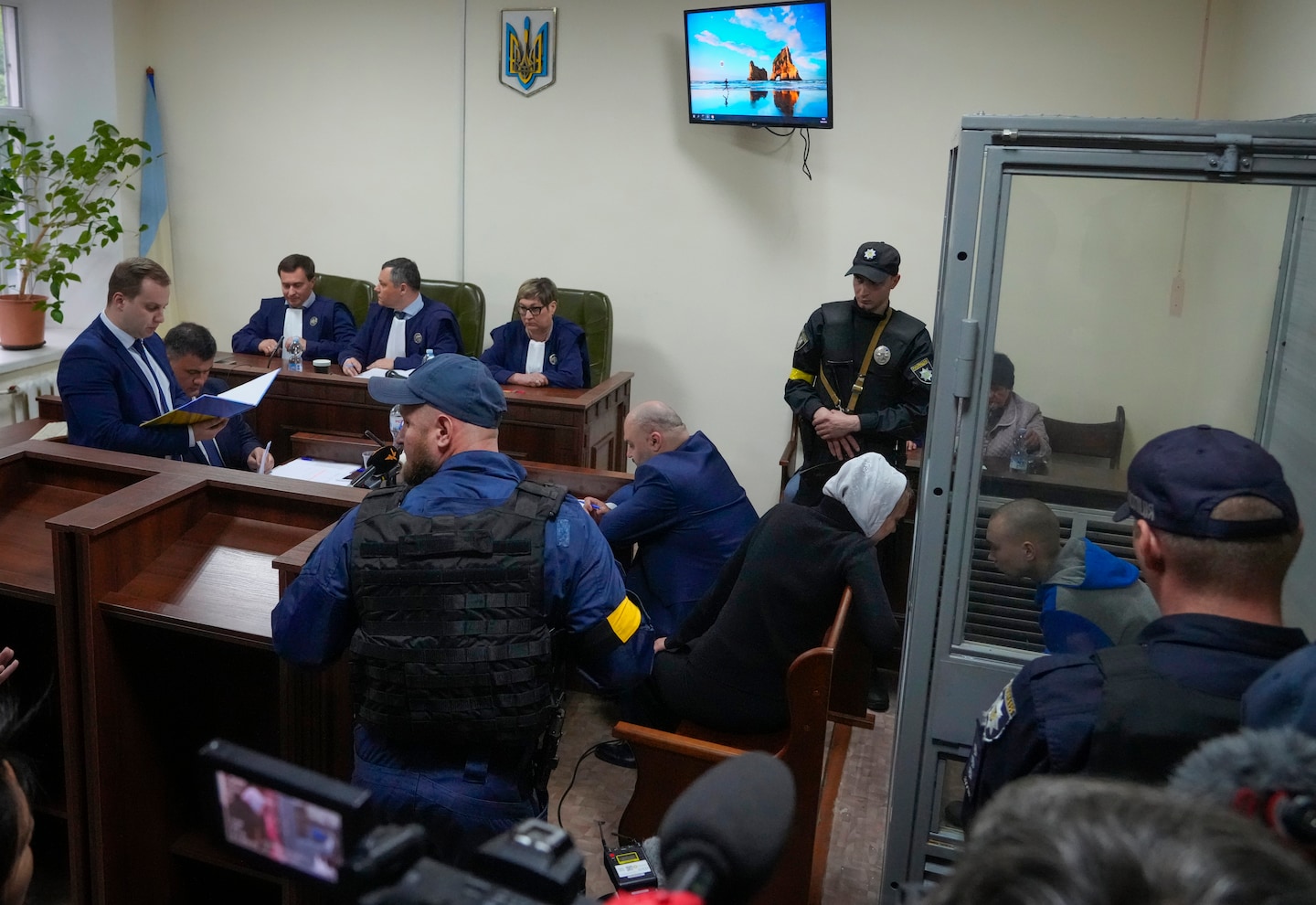 Combatants captured by enemy forces during conflict are protected under international law. As prisoners of war, they are afforded certain privileges, including humane treatment, medical care and a swift return to their home countries when a conflict ends.

As Russia’s war in Ukraine grinds on, both sides have taken enemy troops captive, drawing scrutiny from rights groups and humanitarian organizations such as the International Committee of the Red Cross.

Russia said Friday that more than 1,900 Ukrainian fighters had surrendered from the Azovstal steel plant in Mariupol in recent days. At least some of those fighters were taken to a facility in Russian-controlled territory in eastern Ukraine, according to Russia’s Defense Ministry.

In Ukraine, authorities have already put three captured Russian soldiers on trial for war crimes. One soldier, 21-year-old Vadim Shishimarin, pleaded guilty to shooting and killing an unarmed civilian in the Sumy region of northeastern Ukraine in the first week of the war. He faces a potential life sentence if convicted. Two more Russian troops are also on trial for shelling civilian targets in the Kharkiv region.

Here’s what to know about prisoners of war and the rules governing their treatment under international law.

What are prisoners of war?

Prisoners of war, or POWs, are members of the armed forces, fighters in certain militias or volunteer forces who “have fallen into the power of the enemy” during a conflict, according to the Third Geneva Convention, an international accord adopted in 1949 as part of a set of treaties regulating the rules of war.

Other groups that fall into the category include military support staff, supply contractors and residents of non-occupied territory who spontaneously take up arms to join the fight.

“’Prisoner of war’ is a very important status because it brings with it privileges and protections,” said Laurie Blank, an expert on the law of armed conflict at Emory University. “It’s essentially the most protective status for individuals who are captured.”

But the issue of who counts as a bonafide POW remains fraught with controversy — and is often decided by the captors themselves.

The United States has at times applied the label unevenly — it used it broadly during the Vietnam War but was criticized by rights advocates for not designating captured Taliban fighters as POWs at the beginning of the U.S. military operation in Afghanistan.

In Ukraine, the total number of POWs captured by either side remains unclear. The ICRC said Thursday that it had registered hundreds of Ukrainian POWs this week from the Azovstal plant, “at the request of the parties.”

The registration process includes gathering personal details so that the ICRC can track the prisoners and help them keep in touch with their families, the organization said.

But because the Kremlin has repeatedly referred to Ukrainian fighters in Mariupol as “Nazis,” some rights groups and legal experts are worried that Russia may deny Ukrainian captives POW protections.

Russia’s prosecutor-general this week asked the country’s top court to designate the Azov Regiment, a group with far-right origins that fought in Mariupol, as a terrorist organization, local media reported.

What rights does international law give them?

Russia and Ukraine are among nearly 200 countries that are party to the Third Geneva Convention, which spells out the rights of POWs.

The prisoners “must at all times be humanely treated,” the convention says, and it’s forbidden to intentionally kill, torture or conduct medical or scientific experiments on the captives. Prisoners must also be protected against “violence or intimidation and against insults and public curiosity.”

Countries have to provide POWs with medical care and house them in decent conditions, among other requirements. They must also be detained in designated POW camps rather than prisons. When a conflict ends, the captives should be sent home quickly.

Under the convention, the ICRC, a neutral organization, has the right to access POWs to ensure their humane treatment. The organization said Friday that it has visited prisoners on all sides of the conflict and informed “hundreds of families about their loved ones.”

The details of the ICRC’s work and its findings typically remain confidential.

The Russian and Ukrainian governments have pledged to treat POWs according to international law, but rights groups have accused both sides of abusing prisoners.

Amnesty International has also documented summary killings of captives by Russia-backed separatists in eastern Ukraine, the organization said Tuesday, warning that the Mariupol fighters “must not meet the same fate.”

Can POWs be put on trial?

It depends. POWs cannot be tried for fighting in a conflict. But they can be prosecuted for war crimes, which include deliberately targeting civilians or attacking civilian sites like hospitals or schools.

What are war crimes, and is Russia committing them in Ukraine?

POWs are entitled to a competent lawyer and a fair trial, and they can appeal their conviction and sentence.

Some are asking about international law: Can a Ukrainian court try him?

Still, it’s unusual for prisoners to face trial while a conflict is still ongoing. It can be advantageous to do so while evidence is fresh, experts said, but politics also plays a role.

Ukraine has already started prosecuting Russian soldiers for war crimes, including Shishimarin, who is accused of killing an elderly unarmed man. The man’s widow had initially asked that Shishimarin be sentenced to life in prison, but also said that she would support exchanging him for Ukrainian soldiers from Mariupol that are now in Russian custody. The court will sentence Shishimarin on May 23.

Russia, however, has a highly politicized justice system and a conviction rate of more than 99 percent, according to Russian officials. Authorities there have signaled that they intend to prosecute some of the fighters who surrendered from the Azovstal plant in Mariupol.

“In the past, there’s always been a degree of caution in prosecuting prisoners because of the concern that the other side would prosecute prisoners of well,” William Schabas, an international law professor at Middlesex University in London, said.

Is it legal to film prisoners of war?

The rule around protecting POWs from “public curiosity” was adopted as a response to World War II, when the Germans paraded Allied pilots through towns where the prisoners were harassed and sometimes lynched, according to Schabas.

That protection extends to putting POWs on camera, experts said. Violations don’t count as war crimes, Blank said, but the rule is meant to protect the dignity of captured soldiers, who are especially vulnerable in enemy custody.

Rights groups raised concerns about Ukraine posting videos early in the war of captured Russian soldiers on social media, including some that appeared to show them being intimidated.

Russia’s Defense Ministry this week posted videos to its Telegram channel that appeared to show wounded Ukrainian soldiers in a hospital. In the videos, the men say in Russian that they are being treated well and examined by doctors.

Even though the footage seems intended to show that Moscow is playing by the rules, sharing clips of the prisoners is still prohibited, Blank said.

But the legal imperative changes when POWs are put on trial. In that context, it’s essential for the proceedings to be monitored and publicized to ensure that the defendants are getting a fair trial, Reidy said.

In Russia, the absence of independent media and monitoring groups would cause concern about the fairness of the trials held there, she said.