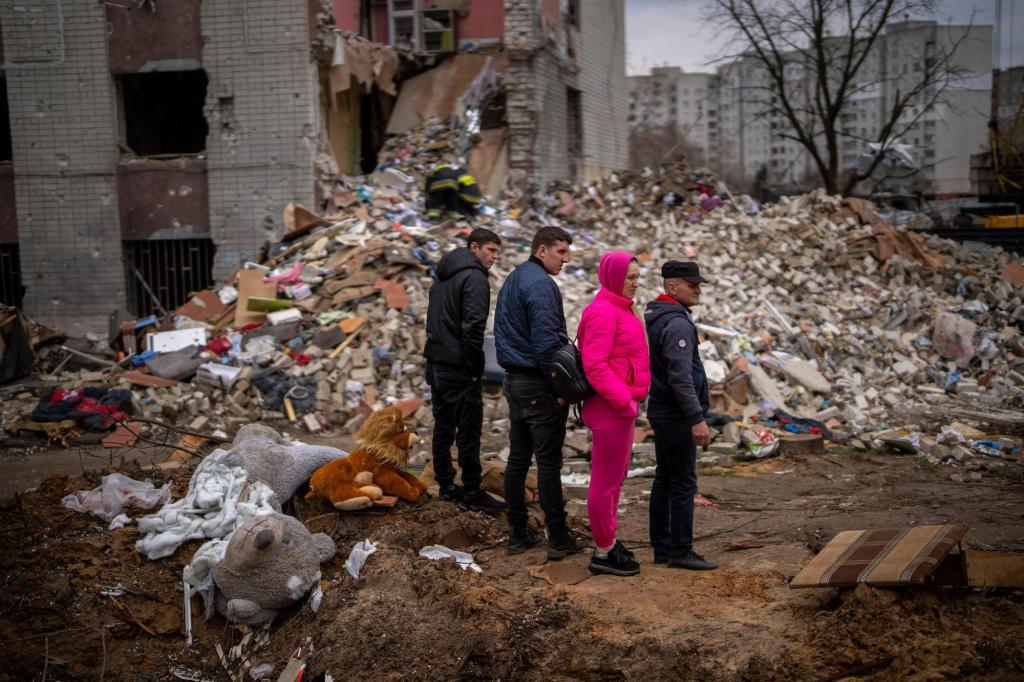 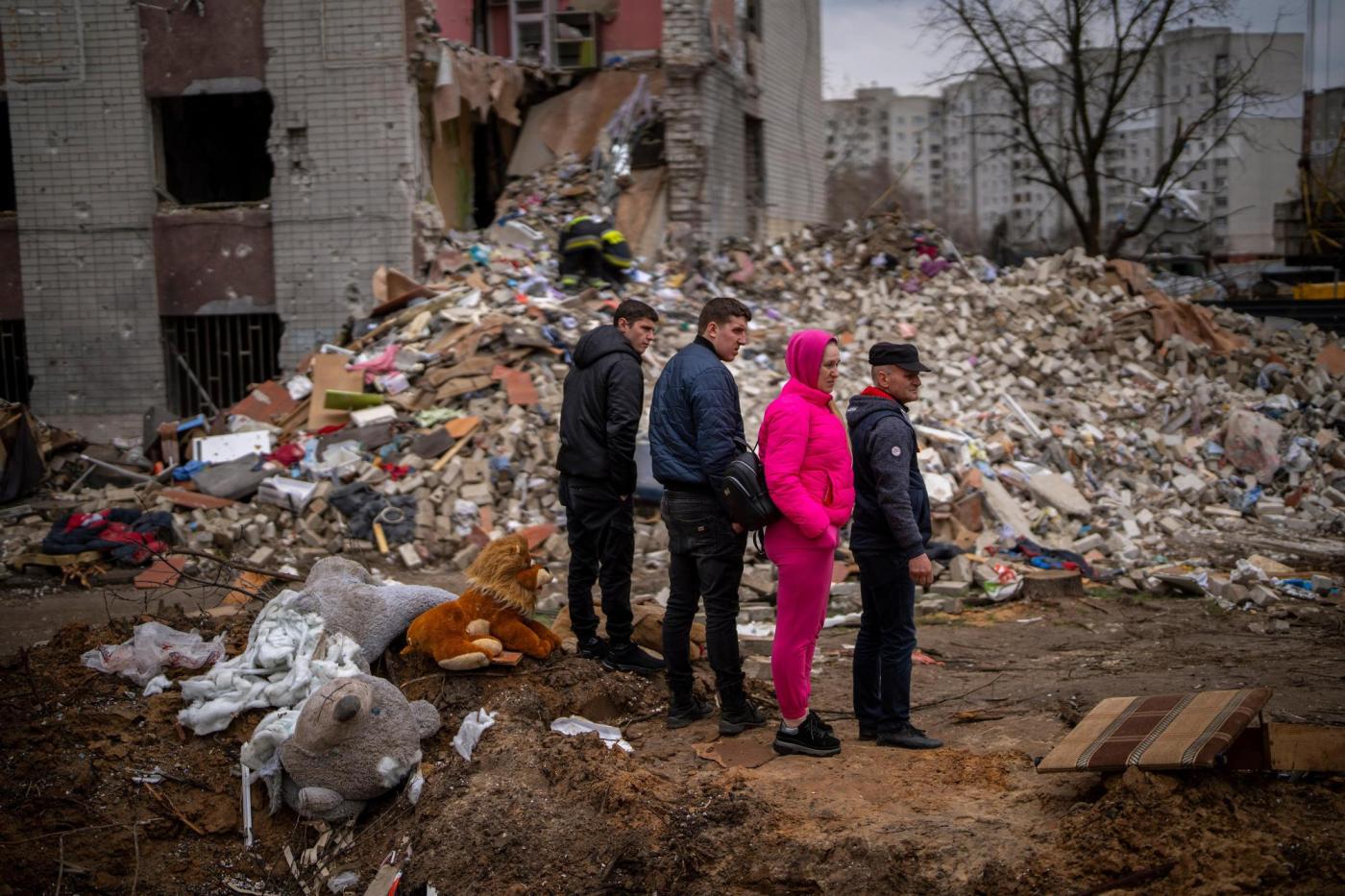 By DAVID KEYTON and YESICA FISCH

KYIV, Ukraine (AP) — An advisor to Ukraine’s presidential office says Russian forces are attacking a steel plant that is the last defense stronghold of Ukrainian forces in the strategic port city of Mariupol.

Oleksiy Arestovich, an advisor to the head of Ukraine’s presidential office, said during a briefing on Saturday that the Russian forces have resumed air strikes on Azovstal and were trying to storm it.

“The enemy is trying to completely suppress resistance of the defenders of Mariupol in the area of Azovstal,” Arestovich said.

Arestovich’s statement came two days after Russian Defense Minister Sergei Shoigu reported to President Vladimir Putin that the whole of Mariupol, with the exception of Azovstal, had been “liberated” by the Russians.

Putin ordered the Russian military to not to storm the plant and instead to block it off in an apparent attempt to stifle the remaining pocket of resistance there.

Ukrainian officials have estimated that about 2,000 of their troops are inside the plant along with about 1,000 sheltering in the facility’s underground tunnels.

Arestovich says the Ukrainian fighters are still holding on despite the resumed attacks and are even trying to counter them.

THIS IS A BREAKING NEWS UPDATE. AP’s earlier story follows below.

KYIV, Ukraine (AP) — Women and children sheltering inside a steel plant in the shattered Ukrainian port city of Mariupol said they longed to see the sun, according to a video released Saturday, as Russian troops pressed their offensive in the eastern Donbas region against fierce resistance.

The Azov Regiment of Ukraine’s National Guard, which has members holed up in the Azovstal steel plant along with other soldiers and civilians, released footage of around two dozen women and children, some of whom said they had been in the mill’s underground tunnels for two months.

The regiment’s deputy commander, Sviatoslav Palamar, told The Associated Press the video was shot Thursday. The contents could not be independently verified. Both Ukrainian and Russian authorities have said the Azovstal plant is the last remaining defense stronghold in Mariupol, which has been under siege since the start of Russia’s invasion of Ukraine.

“We want to see peaceful skies, we want to breathe in fresh air,” one woman in the video said. “You have simply no idea what it means for us to simply eat, drink some sweetened tea. For us, it is already happiness.”

More than 100,000 people — down from a prewar population of about 430,000 — are believed trapped in Mariupol with little food, water or heat, according to Ukrainian authorities. The authorites estimated Friday that about 1,000 civilians remain trapped at Azovstal together with about 2,000 Ukrainian fighters.

The footage showed soldiers giving sweets to children who respond with fist-bumps. One young girl says she and her relatives “haven’t seen neither the sky, nor the sun” since they left home on Feb. 27.

“We really want to get out of here safely, so that no one gets hurt,” the girl pleads.

Russian President Vladimir Putin declared victory in Mariupol earlier this week and ordered his forces not to storm the steel plant but to seal it off in an apparent bid to starve out the Ukrainians and force them to surrender. The southern city is of strategic importance to Moscow and has become a symbol of Ukraine’s dogged resistance to the invasion.

Over 20,000 civilians have been killed in Mariupol during the nearly two-month siege, Satellite images released this week showed what appeared to be mass graves near Mariupol, and local officials accused Russia of burying thouands of civilians to conceal the slaughter taking place there.

Ukrainian officials were trying again Saturday to evacuate women, children and older adults from Mariupol after many previous attempts failed. The effort was to get underway at midday “if everything goes according to plan,” Deputy Prime Minister Iryna Vereshchuk said on the messaging app Telegram.

Russia has pulled a dozen crack military units from Mariupol to bolster the offensive elsewhere in the eastern Donbas region, while other troops continue to keep the remaining Ukrainian troops in the city pinned in the plant, Ukrainian officials said.

In Donbas, Russian troops pressed their offensive in an attempt to fully seize Ukraine’s industrial heartland but have made little headway as fierce Ukrainian counterattacks have slowed their efforts, Ukrainian and British officials said Saturday.

“Units of Russian occupiers are regrouping. Russian enemy continues to launch missile and bomb strikes on military and civilian infrastructure,” the General Staff said on its Facebook page.

Luhansk Governor Serhiy Haidai said Saturday that two people were killed by Russian shelling in the city of Popasna. Separately, Kharkiv regional governor Oleh Synehubov said on Telegram on Saturday that two people were killed and 19 more wounded by the Russian shelling. Synehubov said that over the past day the Russian forces fired at the region’s civilian infrastructure 56 times.

“In addition to the fact that street fighting continues in the city (of Popasna) for several weeks, the Russian army constantly fires at multistory residential buildings and private houses,” Haidai wrote on the messaging app Telegram. “Just yesterday, local residents withstood five enemy artillery attacks. … Not all survived,”

Britain’s Ministry of Defense said despite their increased activity “Russian forces have made no major gains in the last 24 hours as Ukrainian counter-attacks continue to hinder the efforts.”

Russia still has not established air or sea control due to Ukrainian resistance, and despite Putin’s declaration of victory in Mariupol, “heavy fighting continues to take place, frustrating Russian attempts to capture the city, thus further slowing their desired progress in the Donbas,” the Ministry of Defense said.

Overall, the Kremlin has thrown more than 100,000 troops and mercenaries from Syria and Libya into the fight in Ukraine and is deploying more forces in the country every day, Danilov said.

“We have a difficult situation, but our army is defending our state,” he said.

In western Ukraine, regional governor Maksym Kozytskyy announced a curfew for the Lviv area ahead of Orthodox Easter. Kozytskyy cited “new intelligence” and said the curfew would run from 11 p.m. Saturday to 5 a.m. Sunday, and then every day between these hours until further notice.

“Unfortunately, the enemy doesn’t have such a concept as a major religious holiday,” Kozytskyy wrote.

Mariupol has taken on outsize importance in the war. Capturing it would deprive the Ukrainians of a vital port and allow Russia to create a land corridor with the Crimean Peninsula, which Moscow seized from Ukraine in 2014.

Taking over the city also would allow Putin to throw more of his forces into the potentially climactic battle for the Donbas and its coal mines, factories and other industries.

The city has been reduced largely to smoking rubble by weeks of bombardment, and Russian state TV showed the flag of the pro-Moscow Donetsk separatists raised on what it said was the city’s highest point, its TV tower. It also showed what it said was the main building at in flames.

Under cover of darkness, Ukrainian forces have managed to deliver weapons to the besieged steelworks via helicopter, said Oleksiy Danilov, secretary of Ukraine’s National Security and Defense Council.

The latest satellite photos from Maxar Technologies revealed what appeared to be a second mass grave site near Mariupol. The site at a cemetery in the town of Vynohradne has several newly dug parallel trenches measuring about 40 meters (131 feet) long, Maxar said in a statement.

Earlier, Maxar released photos of what appeared to be rows upon rows of more than 200 freshly dug mass graves next to a cemetery in the town of Manhush, outside Mariupol. That prompted Ukrainian accusations that the Russians are trying to conceal the slaughter of civilians in the city.

“This confirms again that the occupiers arrange the collection, burial and cremation of dead residents in every district of the city,” Andryushchenko said on the Telegram messaging app.

The Ukrainians estimated that the graves seen in the photos released Thursday could hold 9,000 bodies.

The Kremlin did not respond to the satellite pictures.

Follow the AP’s coverage of the war at https://apnews.com/hub/russia-ukraine