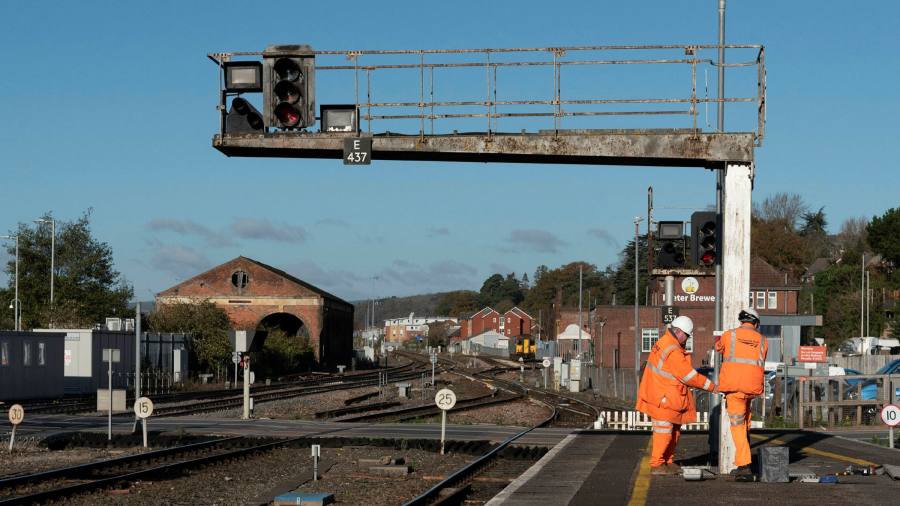 Rail executives are drafting emergency plans to cut Britain’s train network to a 12-hour service ahead of union members voting this week on what would be the biggest rail strike to hit the country in 30 years.

The RMT Union has asked 40,000 workers at infrastructure operator Network Rail and members at 15 train operating companies to vote in favour of industrial action in a ballot which closes on Tuesday.

The dispute centres on plans by Network Rail to cut at least 2,500 maintenance jobs, and what the RMT called an “attack” on pay and conditions at train operating companies.

The RMT said the threatened strikes would be the biggest in Britain for 30 years. It has not yet decided whether it would carry out rolling actions or “one big action” combining Network Rail and the train operators, said one union official. The earliest first day of any strike would be June 7.

Network Rail has briefed train and freight operators that in a worst-case scenario the railway would be forced to go down to running a 12-hour-a-day service, according to two industry executives.

Ministers and rail industry executives believe that a strike by guards or station staff would be manageable, but it is the possibility of a national strike at Network Rail, and signallers in particular, which could cause more sustained damage to the economy and disruption for commuters.

These services would be “drastically” smaller than normal — around 20 per cent of the current timetable — with main routes prioritised over branch lines, one of the executives said.

The freight industry runs a 24-hour service, leaving it even more vulnerable to disruption. Royal Mail letters and parcels, aviation fuel for Heathrow and fuel for power stations are some of the goods which could be affected by a strike.

The Rail Delivery Group, which represents rail companies, said the industry was contingency planning “to keep goods and passengers moving this summer”.

The government believes there is “enormous scope” for cutting costs from the railways, and argues that maintaining huge subsidies to run the network at a time of lower passenger numbers is untenable.

“That is what government plans will mean for the railways if RMT and other transport unions don’t mount a comprehensive defence of the industry.”

Still, ministers believe that the ballot could fail to reach the requisite thresholds of 50 per cent turnout and 40 per cent approval from the entire electorate.

Out of 49 RMT ballots in 2020, 15 failed to meet both thresholds, which were made a legal requirement for industrial action in 2016. “This is not a super-militant membership,” said one official.

Ministers also believe that the impact of a mass RMT strike could be limited by the fact that people are now more used to working from home.