UK defence minister gets popularity dividend for role in Ukraine 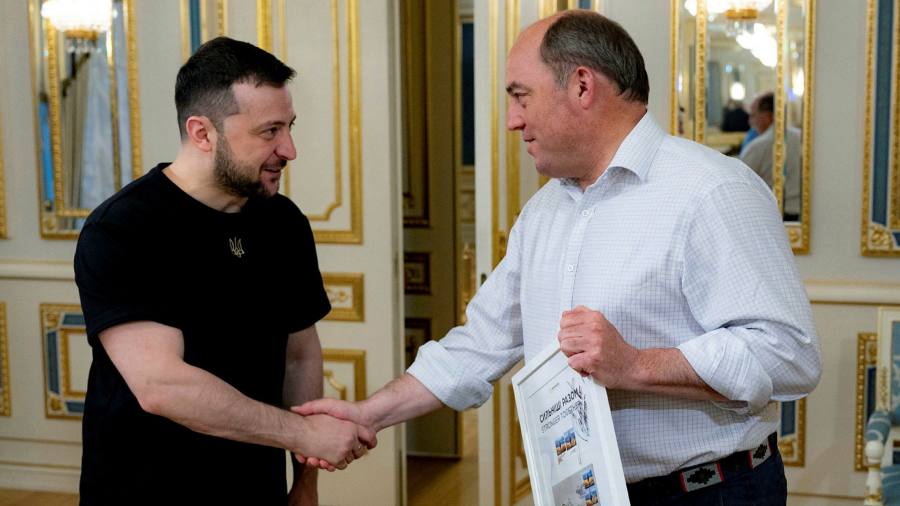 Ben Wallace made a critical mission to Turkey last week, his latest in a string of foreign trips where he has rallied support for Ukraine and worked to roll back Russia’s assault.

The UK defence secretary was aiming to use his trip to Ankara to soften Turkish opposition to Sweden and Finland’s bids to join Nato ahead of the military alliance’s summit this week in Madrid.

Turkey continues to reject this initiative in public. Even so, Wallace — a bluff, balding and bustling former soldier who peppers his remarks with details about weapons systems and quotes from war theorists — has been one of the higher-profile western officials involved in Ukraine’s conflict.

This has boosted Wallace’s domestic popularity to the extent the 52-year-old at present ranks as the ruling Conservative party’s most popular cabinet minister with activists, according to a regular survey by ConservativeHome, a blog focused on the Tories. The defence secretary is cited as a possible successor to the UK’s scandal-prone Prime Minister Boris Johnson.

Yet Wallace’s Turkey trip was not about domestic politics but rather a testament to his military standing outside the UK. Nato peers say his natural understanding of soldiers’ needs and the imperatives of an army at war has elevated Britain’s voice in discussions about the Ukraine war and Nato’s future.

The Ankara visit capitalised on Wallace’s previous post as UK security minister, when he oversaw counter-terrorism and established good relations with his Turkish counterparts, Whitehall officials said. It also drew on his experience as a former overseas director of British arms manufacturer Qinetiq.

“Wallace is very good at relationships with foreign ministers, and works them assiduously — you can tell he was once a defence salesman,” said one person who has worked closely with him.

A former captain in the Scots Guards, Wallace — like other British politicians with a military background who have seen their popularity soar — has had a “good war” while also, where possible, advocating peace. Before Russia launched its full out assault, Wallace travelled to Moscow to warn his counterparts of the consequences.

“He has done well so far on Ukraine, and pushed hard to overcome the initial caution of Whitehall’s ‘securocrats’ to provide early military aid for Kyiv when Russia moved troops to the border,” said Ben Barry, a former brigadier and now senior fellow at the International Institute for Strategic Studies, a London think-tank.

“He also took an early lead in setting up the international donors’ conference that co-ordinates military supplies to Ukraine. That role has since been taken over by US defence secretary Lloyd Austin, but he remains highly engaged in operational detail.”

At ease with rank-and-file soldiers and straight-speaking in the House of Commons, Wallace often comes across as a beacon of good sense in a periodically chaotic government. “Nobody adds the word ‘idiot’ to his name as they do with some other ministers,” said one military insider.

He spoke against the apparent diversion of UK military resources to airlift cats and dogs from a favoured charity during the shambolic evacuation of western forces from Afghanistan last year. He advised against British volunteers going to fight in Ukraine, contrary to foreign secretary Liz Truss who earlier said she would “absolutely” back anyone doing so.

But his army background can sometimes be a burden. One official said: “He can get overly involved in tactical details, adopt points of view based on incomplete understanding and then assert his authority to show he is boss; it can make him frustrating to work with.”

One example is Wallace’s decision to cut back orders for the E-7 Wedgetail aircraft, an early warning and control system, which defence experts warn opens up a capability gap in British reconnaissance. “He is unafraid to take decisions, even if they don’t please everyone,” Barry said.

Born in 1970 in the Hampshire town of Farnborough to a soldiering father, Wallace took an establishment track into the army, attending military school at Sandhurst before joining the Scots Guards, which he left in 1998 to enter politics, first as a member of the Scottish parliament.

A Johnson loyalist, although they have different temperaments, he voted Remain in the 2016 EU referendum and was security minister during Russia’s attempted poisoning of double agent Sergei Skripal in Salisbury in 2018 — a defining moment in the hardening of British attitudes towards Moscow.

Rewarded for being manager of Johnson’s Conservative leadership campaign, he became defence secretary in 2019, a post that has seen 10 ministers in 17 years. He has cited the strains of work for the recent separation from his wife, with whom he has three children.

Although he can appear a full-bellied Tory of the old school, Wallace has seemingly kept up with the times. He has said the army needs “a lot more women” and bemoaned its inability to “reflect the society we serve and support and defend”. He launched an independent review into the experience of LGBT+ veterans affected by the pre-2000 ban on homosexuality in the armed forces.

His next major domestic task is to secure extra funding for Britain’s shrunken land forces, whose weapon supplies he has warned are being depleted by the need to supply Ukraine.

Britain spends about 2 per cent of gross domestic product on defence, but many leading politicians say it needs to rise to 3 per cent given Ukraine. “I’ve always said that as the threat changes, so should funding,” Wallace has said.

Might he become prime minister one day? While ambitious, betting markets give him an outside 10:1 chance and Wallace clearly relishes his work.

“There’s a lot of people out there who want to do more to help Ukraine. I get to do that,” Wallace said in a recent interview. “But I am a politician so you read that answer as you’d like.”