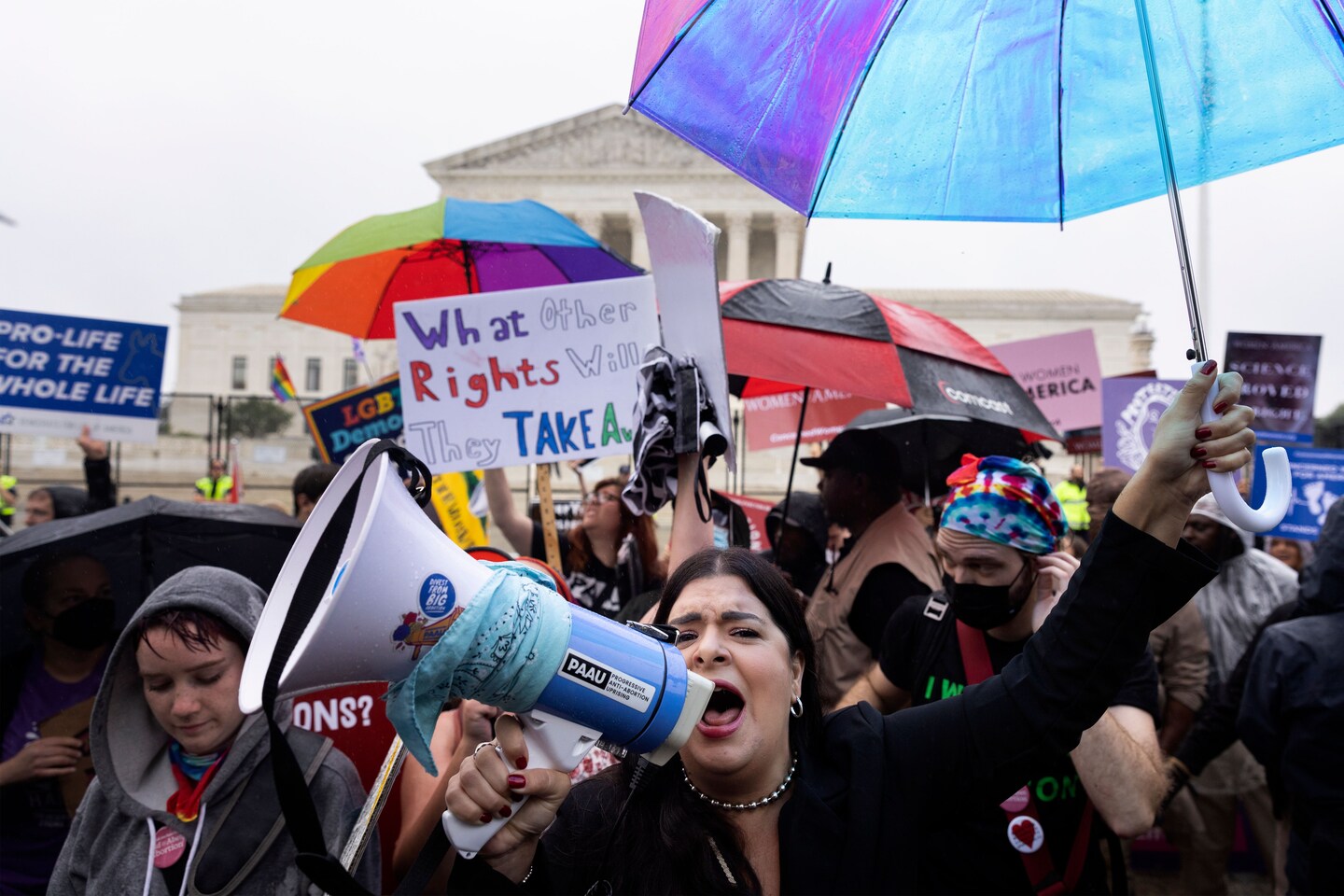 When Justice Samuel Alito’s draft opinion in Dobbs v. Jackson Women’s Health Organization leaked nearly two months ago, signaling that Roe was about to fall, I felt sick, both figuratively and literally. First. I thought of the faces and the stories of the women I had interviewed in abortion clinics in three states, for various articles and documentaries. I felt shaky, thinking about what would happen to women like them, now; women who often had other children to support.

But I also felt actual nausea as I flashed back to my own difficult pregnancy. I suffered from hyperemesis gravidarum — a detached-sounding clinical term that describes vomiting constantly while pregnant. It’s like morning sickness, but all day and for all three trimesters (only waning, in my case, in the very last month). I couldn’t swallow prenatal vitamins; cucumbers were one of the few foods I could keep down. My throat ached from bile, and I was weak. Sometimes I was bedridden and almost never was I able to get work done (except to write occasional poems about, yes, pregnancy and nausea). Eventually, I wound up on Zofran, a drug sometimes prescribed to patients undergoing chemotherapy. (It didn’t really work.) Mercifully, my husband and I had some savings, so I could sink into an entropic duvet existence till I gave birth and was no longer imprisoned in my own ill body.

As many as a third of women experience some form of trauma during pregnancy or birth — caused not only by illnesses like mine but by such things as complications during delivery and inadequate support during labor. And a significant fraction who experience this suffering also end up with post-traumatic stress disorder (PTSD). After I gave birth, I had some of the classic signs of post-traumatic stress disorder: I constantly replayed the worst moments of my pregnancy; I suffered from anxiety spikes (when I walked past my OB/GYN’s office, for example); and I avoided anything that reminded me of pregnancy (I tossed my maternity clothes as soon as I could). The latter was part of my effort to dissociate from that time.

That disassociation may explain why it took Roe’s demise — which became official on Friday — to grasp that what I suffered from was psychologically diagnosable: Yes, that was indeed PTSD. Estimates of the proportion of women with pregnancy-and-birth-related PTSD range widely (from 4 percent to 19 percent, depending on the study), but it is known to disproportionately affect women who have had previous trauma or who are financially stressed — as well as women of color.

Of course, the statistics about prevalence come from a world in which most pregnancies are wanted. In the world the Supreme Court has just created, women will be forced to carry unwanted pregnancies to term, which will only increase the physical and psychological stress on mothers.

For decades, the antiabortion camp has inundated the public with claims about the ostensible suffering of groups of fetal cells (in propaganda like “The Silent Scream”); those who worked to reverse abortion rights point to the electrical impulses in these cells and call them, misleadingly, “heartbeats.” Meanwhile, the very real bodily and mental suffering of many pregnant women gets short shrift. Until I myself developed hyperemesis gravidarum, I had no idea 0.5 percent to 2 percent of pregnant women experience it, or that, among those, more than half experience at least one PTSD symptom, according to one study, and fully 20 percent experience “full criteria” PTSD.

And hyperemesis gravidarum is far from the worst physical ailments that pregnant women can face. Other afflictions include life-threatening diseases such as preeclampsia, which affects an estimated 5 to 7 percent of pregnant women, or pulmonary embolisms.

People who give birth willingly can, with difficulty, reconcile themselves to pregnancy-related trauma because they desperately want to have a child. But if I had not desired my daughter with all my heart, the physical pain I experienced, which also caused psychologically scarring, would have been akin to torture.

Antiabortion activists like to throw around pseudo-diagnoses like the “trauma of a past abortion” and “post-abortion syndrome,” glossing over, or flatly ignoring, the afflictions that pregnancy can cause. Yet pregnancy-related trauma needs to be part of the discussion about the implications of forcing women to carry fetuses to term.

We need to tell stories like the one Courtney Lund O’Neill related in Parents magazine, in which she described 28 hours of labor that nearly killed her. When she was finally put on oxygen, “A sea of people stood around me, screaming for me to breathe.” The experience, worsened by what she describes as subpar care, led to PTSD: “I suffered from insomnia, nights spent staring at the ceiling as the past rewound in my mind.”

We should tell stories like that one for political reasons but also, more basically, because the silence around pregnancy-related trauma comes from stigma. It took the shock of the Dobbs decision for me to confront the pregnancy-related suffering I endured. Dobbs also reminded me what I already knew: That these mental and physical maladies should be part of the debate over abortion — and, like abortion itself, they should be spoken of without shame.