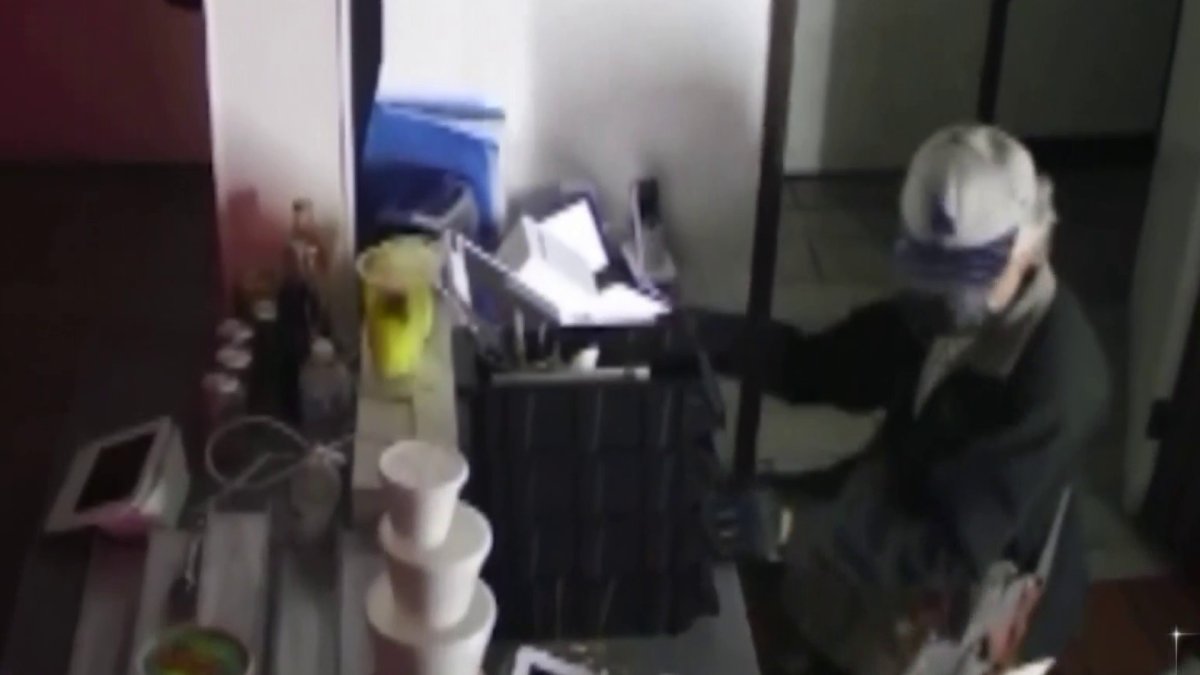 A small business owner in Boyle Heights says he’s concerned about a rise in crime after his restaurant and vehicles have been broken into four times during the past year.

The restaurant, Birria Los Socios on East Third Place is closed on Mondays and the front door has been repaired, but early Easter Sunday, a thief smashed through the glass and made off with thousands of dollars in electronic equipment.

“He tried to pry it open here,” said owner Jose Pacheco. “As you can see he dented all this with a screwdriver.”

Pacheco is still assessing the damage after his business was broken into around 5:30.

He’s hoping this surveillance video might help identify the thief – who busted through the front door glass and went directly to the kitchen where he stuffs iPads and an iPhone into a bag.

Cameras caught him trying unsuccessfully to get into the cash register, and then crawling into a hallway to rifle through employee lockers.

“He opened them all up,” he said. “He emptied out whatever was valuable.”

Pacheco says the thief wasn’t able to get into the locked office.

“The alarm went off. I think he got panicked and luckily he left before he opened that door.”

Pacheco says the loss of the iPads means he can’t accept any online orders for doordash or grubhub, which accounts for about half of his business right now.

“Now I have to wait for new iPads to arrive,” he said. “Now I’m not going to be able to sell online orders – it’s really gonna hurt my business.”

Pacheco is surprised the thief was so brazen, breaking in despite plenty of lighting, an alarm system, and surveillance cameras.

Pacheco says he took a big risk opening a restaurant during the pandemic and he’s been struggling due to a previous break-in on New Years Eve, and several break ins of his families vehicles parked outside.

“It’s getting pretty bad,” he said. “Like I mentioned before my mom got her truck broken into and I got my catalytic converter stolen from my truck.”

The LAPD said they took a report, but they admit it will be hard to catch this guy because he was wearing gloves and the cameras never got a good look at his face.

But he did appear to have bushy grey hair or a wig beneath his hat.