The U.S. Is Offering Meat Processors $1 Billion in Grants. Will It Actually Help? 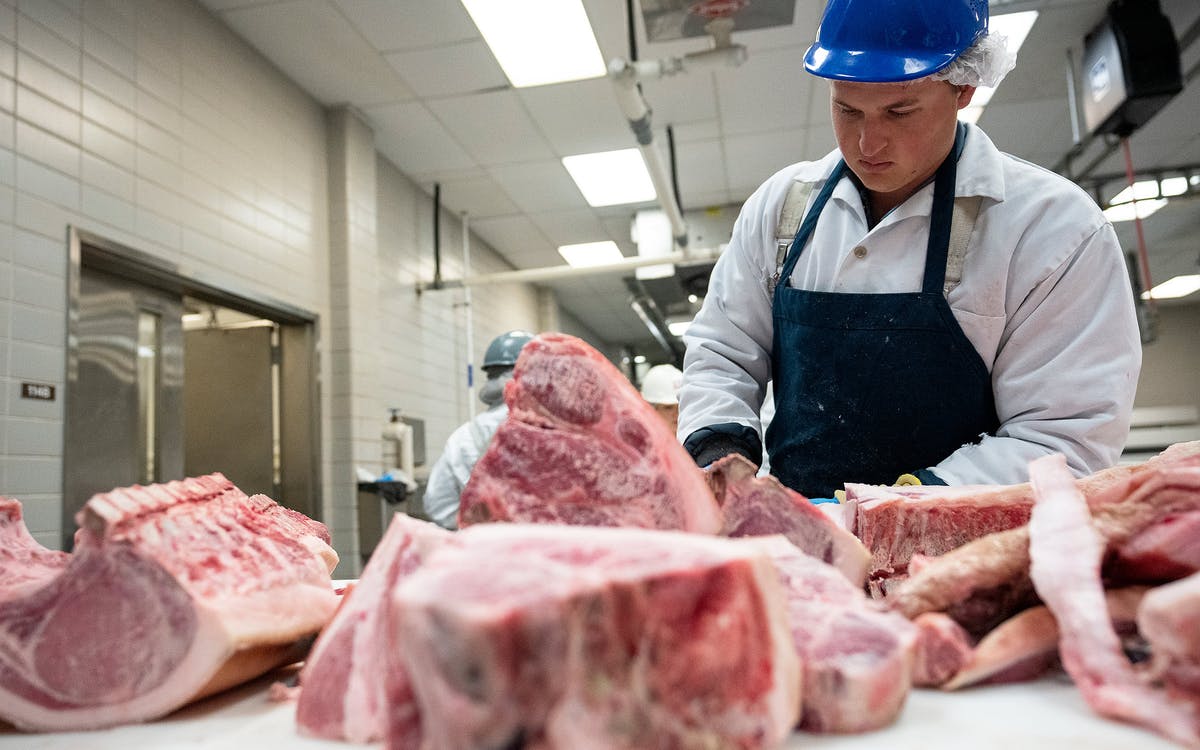 In the meat-cutting lab at Texas A&M’s Rosenthal Meat Science and Technology Center, eager students wearing chain mail under their aprons fix their eyes on a prodigious carcass. An instructor uses a hacksaw to cleave the former cow. Knowing where to place the tip of a knife to transform a thousand-pound carcass into market-ready cuts of beef is a skill that could land the students secure jobs after graduation. Many graduates of this program go on to work in the country’s largest meat-packing companies, known as the Big Four—Cargill, JBS, National Beef, and Tyson.

President Joe Biden announced a “crackdown” on these companies during his State of the Union speech in March. He says they overcharged consumers during the COVID-19 pandemic, when cattle prices plummeted while beef prices skyrocketed. While the Department of Justice conducts an antitrust investigation into the Big Four, the Biden administration is promoting competition by making $1 billion in grants from the American Rescue Plan available to aspiring and existing federally inspected meat processors.

Dean & Peeler Meatworks, a small processor in Poth, forty miles southeast of San Antonio, is applying for the funding. Co-owner Dustin Dean wants to quadruple his plant’s rail-cooler space and double its processing area. “We’ll be tripling our employees as well,” Dean says.

As Dean sees it, Texas is in a unique position to benefit from the federal funds due to the state’s sizable population of beef consumers. “The whole industry is headed toward smaller, more regionally sized packers,” he says. “Texas is the poster child for what needs to be the model for small, regional expansion.”

Jim Lee, owner of Mineola Packing Company, agrees. He says that since the pandemic, “people are saying, ‘I’d rather do business with my neighbor than with someone in Nebraska.’ It’s the good old American way of helping your neighbor. We’re finally saying, ‘I don’t need y’all—I got it right here in my backyard.’ ” Lee hopes to update his equipment with the grant money.

But the generous flow of federal money doesn’t unclog the bottleneck of beef production, which has led to high meat prices—the largest contributor to the rising cost of food during the worst inflation rates the U.S. has seen in forty years.

One factor contributing to the congestion is a staffing shortage of USDA inspectors, who are required to be on-site on slaughter days and during further processing. That might happen at the same time every day at a large plant but only once a week at a smaller plant, and waiting on the inspector to arrive at a rural location may take more time, resulting in a slower rate of production.

Another factor that creates production holdups is a shortage of slaughterhouse workers. “This is hard, vile work, and not many people are willing to do it,” says Caroline Fruth, owner of Fruth Farms Southwest in Caddo Mills, about forty miles northeast of Dallas. She and others propose the government should allow companies to more easily employ migrant workers on a legal basis. Each year, Fruth takes thirty cows to a local plant and then sells the meat at farmers’ markets. She prefers using a mid-scale, family-owned processor over a Big Four company because she believes the process is more humane. During the pandemic, she had to wait to have cows slaughtered because there weren’t enough employees to get the job done. “If we had a decent migrant worker situation in this state, finding workers would not be a problem,” she says.

There are also an increasing number of regulations related to food safety, worker safety, and environmental quality that small companies can’t keep up with. The Big Four have specific teams dedicated to meeting these standards that family-run operations just don’t have or have the means to hire. Judith McGeary, the executive director of Farm and Ranch Freedom Alliance, suggests a different, custom, or more pared-down set of regulations for small processors. “We need a much more holistic approach,” she says. “Why are the regulations so hard for small-scale processors and easy for the big guys?”

Even if these hindrances were fixed tomorrow and the small processors got the grant money, it’s still an uphill battle to compete with the Big Four.

“It would be nice to believe that smaller plants could become profitable . . . but if they are no longer profitable, they will either be sold to other companies, or they will be shuttered,” says Cliff Lamb, the director of Texas A&M AgriLife Research and the former head of A&M’s Department of Animal Science. It’s possible the Big Four could acquire those newly built or updated plants as new branches, as Bill Bullard, who runs a national advocacy group for cattle farmers, suggested in a New York Times opinion piece.

Dean, who is five years into the meatpacking business with Dean & Peeler Meatworks, confirms. “Yes, you’re going to see a boom in small production plants, a boom in expansion, and a boom in killing and processing capacity,” he says. But he also describes the meatpacking industry as an “extremely tough” business. “There’s a steep and long learning curve, and you have to stay profitable through the learning curve,” he adds.

Joe Harris, president and CEO of the Southwest Meat Association, a Texas-based trade organization, is less optimistic—or perhaps more realistic. “Eventually those grants run out, and the firms benefiting from them will have to compete, just like always,” he says. “I hope that many will carve out a niche and find a way to survive and be profitable; I fear that many will not.”

In Dean’s view, Texas meat processors have already carved out a niche: consumers who don’t mind driving the extra miles to buy beef directly from local processors instead of big chain grocers.

“No [other] state has the trifecta of cattle, feed source, and consumers all in one spot,” Dean says. “Texas is leading the pack on that.”