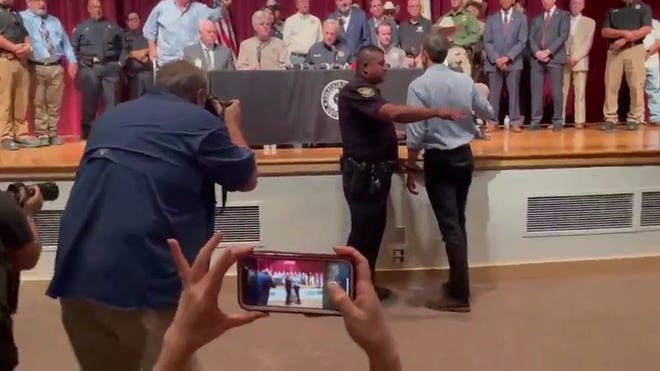 UVALDE, Texas – Texas Gov. Greg Abbott said the gunman in a school shooting sent social media messages about his intentions half an hour before the deadly rampage.

Shortly after his revelation, former congressman Beto O’Rourke confronted Abbott about “doing nothing” about gun violence, adding a chaotic element to a Wednesday news conference addressing the attack at Robb Elementary School that left 19 children and two teachers dead Tuesday.

Abbott said there was no other “meaningful forewarning of this crime,” emphasized the need for mental health services and said of the victims’ families, “what they need now more than ever is our love.”

When Abbott was about to pass the microphone to another speaker, O’Rourke, a Texas gubernatorial candidate, approached the stage with a call for action. O’Rourke was the U.S. Representative for the El Paso area when a gunman killed 23 people during a 2019 mall shooting in that city.

Before being escorted away, he said: “This is on you until you choose to do something different. This will continue to happen. Somebody needs to stand up for the children of this state or they will continue to be killed just like they were killed in Uvalde yesterday.”

The massacre took place in one fourth-grade classroom and was the state’s deadliest school shooting in modern history and the nation’s third mass shooting within weeks.

Authorities identified the gunman as Salvador Ramos, 18, but revealed no motive. State Sen. Roland Gutierrez, who was briefed by state police, said the gunman “suggested the kids should watch out” and that he had bought two assault weapons after turning 18.

THE VICTIMS:‘There are no words’: Families mourn as names of Texas school shooting victims begin to emerge

‘CONSTANT FEAR’:It’s not just Uvalde, Texas — gunfire on school grounds is at historic highs in the US

LATEST UPDATES TO YOUR INBOX:Sign up for our daily briefing

Horror, death in one classroom

The killer entered the classroom, locked the door and started shooting, said Lt. Christopher Olivarez of the Texas Department of Public Safety told CNN. Officers arriving on the scene began breaking windows around the school trying to evacuate children and teachers. Olivarez said a tactical team forced its way into the classroom and faced gunfire but was “able to shoot and kill that suspect.’’

Multiple students in the classroom were wounded, and officials have said the death toll could rise. Olivarez did not know how many students were in the room when the shooting started but said it normally would hold 25-30 kids.

“A typical classroom setting, where you have mass groups of children inside that classroom all together, with nowhere to go,” Olivarez said. “It just shows you the complete evil of the shooter.”

What do we know about the victims?

Nineteen children and two teachers were killed in the shooting, Texas Department of Public Safety Lt. Chris Olivarez said. A U.S. Border Protection agent, one of several responding to the scene, shot and killed the gunman, a senior Department of Homeland Security official told USA TODAY on Tuesday night.

All the children were fourth graders, and their names are starting to come out, along with the identification of two longtime teachers who were among the victims, Eva Mireles, 44, and Irma Garcia.

The deceased students include:

BLOODSHED SINCE SANDY HOOK:Uvalde school shooting among deadliest school attacks in past 10 years

Schools on alert across the nation

Schools around the country increased security as a precaution. Schools in Washington, D.C., Atlanta, Virginia, Maryland and Florida were among those offering counseling.

In Connecticut, where the 2012 Sandy Hook Elementary School shooting killed 20 first graders and six educators, state police said they were sending extra troopers to schools Wednesday, although no specific threats had been received.

“This assault on the most innocent of our citizens is deeply disturbing and heartbreaking,” Connecticut state police Col. Stavros Mellekas said in a statement. “At this time, our focus will be on protecting all school populations here in our state.”

The suspect legally purchased two AR platform rifles at a local gun shop, one on May 17 and the other May 20, said state Sen. John Whitmire, based on a briefing from state police. One of the rifles was left in the truck the gunman crashed shortly before the shooting, the other was  found in the school with the suspect, Whitmire said. A week ago he had purchased 375 rounds of 5.56 ammunition. The suspect was not wearing body armor but only a plate carrier with no ballistic armor inside, Whitmire said.

The grim task of identifying victims

Uvalde does not have its own medical examiner, so Justice of Peace Eulalio Diaz was called upon to identify the victims. Families waiting at the Civic Center for news of their children provided DNA swabs to authorities to aid in the identification process.

“We know everybody,” Diaz said, reflecting on how his children in 8th and 12th grades will be marked by the tragedy. “We know children who were there.”

Diaz lamented the lack of mental health resources in Uvalde and that the shooter had not received help.

“We’ve talked for years about mental health facilities nearby… we don’t have anything,” he said. “This child was probably suffering from something that was never diagnosed. The way you get diagnosed here is you end up in jail. This kid never made it to jail.”

A neighbor dies in the carnage

Looking across the street at a brown house, Javier Rangel, 57, remembered the young girl who used to play out front. Rangel lives a few blocks from Robb Elementary, where the girl was a student. He said her father posted to Facebook on Tuesday night that she was among the dead.

“This has hit us bad, knowing they were young kids just starting their lives,” said Rangel, a truck driver. “We never thought it would happen in this little town. I used to see her riding her bike, playing with her sisters. That poor little girl.”

Dan Young, shaded beneath his rancher’s hat, came to Uvalde’s civic center to assist with child counseling in the wake of the tragedy, a retired counselor recruited for duty by the local child advocacy he once worked for. Young gets down on the floor and does puzzles with kids.

“I’m able to calm their parents,” he said. “The kids, that’s the easy part. We just sit down with them and play. That’s all they want to do, is play. And forget.”

Laura Donaldson, a Bible class teacher at Crossroads Community Church, moved to Uvalde 26 years ago because she wanted the peace and quiet of a small town. Until this week, she said, it had mostly stayed that way — except for the occasional border-patrol chase speeding through. “We’re only an hour from the border,” she said.

When news of Monday’s shooting broke, “We were all stunned and shocked,” she Donaldson said. “I was at my sister’s, and we didn’t know the extent. We didn’t want to think the worst, but it just kept getting more devastating.”

Nicole Hockley and Mark Barden, co-founders and CEOs of Sandy Hook Promise, each had a son killed in the Sandy Hook Elementary School shooting spree that killed 26 a decade ago, including 20 children. They issued a statement saying they are “sickened under the weight of our sadness as we watch another community of families suffering their worst nightmare.” And they called on everyone to urge elected officials to pass legislation that protects children.

“This can be done while upholding second amendment rights,” the statement said. “Now is the time to take bold action – as a country, how much longer can we stand by while innocent children continue to be killed?”

A field trip, hugs and chaos

Juan Torres and his family live a few blocks from both the school and the home where authorities say they gunman lived. Torres’ wife grew up in Uvalde, and their two young children attend school here, although at different campuses than where the shooting took place.

Torres said he was returning to the city from his construction job Tuesday when he heard about a school shooting on the radio but assumed it was elsewhere. Then he saw the helicopters hovering over his neighborhood.﻿ His daughter had been to San Antonio on a field trip, and teachers texted parents to let them know they could pick up their kids at a rest stop on the outskirts of town.

“I ran out of here so fast, drove down there at like 120 mph and grabbed her, hugged her so hard,” Torres said. “It’s all been a bunch of chaos.”

Where did the shooting take place?

Authorities say the gunman walked into Robb Elementary School in Uvalde, about 85 miles west of San Antonio, around 11:30 a.m. Central Time and opened fire. Uvalde is home to about 16,000 people and is located about 75 miles from the Mexican border. About 82% of the city’s population is Latino, according to the U.S. Census Bureau.

Robb Elementary, part of the Uvalde Consolidated Independent School District, has an enrollment of just under 600 students. The district initially put all campuses on lockdown after gunshots were fired, and it canceled all district and campus activities, after-school programs and events.

Public officials react to the shooting

President Joe Biden in a Tuesday night news conference decried “another massacre” that had left parents in unfathomable pain: “To lose a child is like having a piece of your soul ripped away,” he said. Biden also called for a renewed push for gun control measures, lamenting the lack of progress despite repeated shootings.

“Why are we willing to live with this carnage?” he said. “Time to turn this pain into action.”

Abbott directed that the Texas flag be immediately lowered to half-staff across the state from Tuesday until Saturday in memory of the people who lost their lives in the school shooting.

“The first lady and I extend our prayers of comfort to the survivors and the families of the victims, and we will continue to keep them in our thoughts and prayers,” Abbott said.

‘ENOUGH IS ENOUGH’:Biden calls on lawmakers to take action after Uvalde school shooting

In the last five years, Texas has been the scene of mass shootings that killed more than 85 people. Worshippers during a Sunday sermon, shoppers at a Walmart, students on a high school campus and drivers on a highway have been the targets. The state’s conservative, Republican-controlled government is unlikely to restrict gun access despite the carnage. Last year, gun laws were actually loosened after a gunman at a Walmart in El Paso killed 23 people in a racist 2019 attack that targeted Hispanics.

“I can’t wrap my head around it,” said Democratic state Sen. Roland Gutierrez,  whose district includes Uvalde. “It’s disturbing to me as a policymaker that we have been able to do little other than create greater access to these militarized weapons to just about anyone who would want them.”

Mexican bishops to put photos of dead priests in churches

Manufacturing Plants Aren’t Just Mysteriously Getting Burned Down In The United States, It’s Happening Around The World…