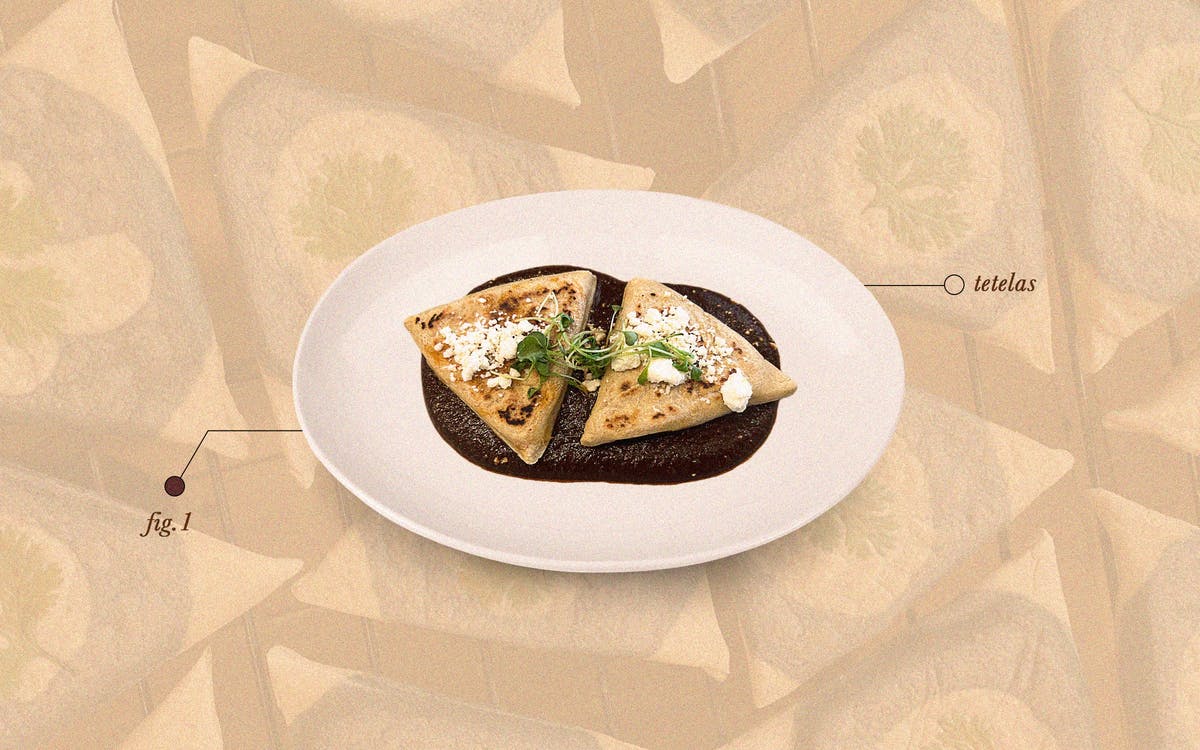 The Tex-Mexplainer series explores the ingredients, techniques, history, and culture of Mexican food in Texas.

With three quick, even folds, Andrés M. Garza transforms a raw, thick corn tortilla into a doughy, triangular tetela. Garza works the masa discs at Nixta Taqueria, where they (Garza identifies as nonbinary and prefers the pronouns they/their) were recently appointed director of masa development and fermentation. I’m mesmerized by Garza’s handiwork. They make it look so easy. But the young masa specialist says tetelas are anything but easy.

However, they do give a glimpse into the expertise of the person who prepares them. “How well the tetelas are shaped when finished says a lot,” Garza says. For someone who’s just starting out, each tetela may resemble a lopsided wedge. Litmus test aside, the tetela is one of a small number of pre-Hispanic dishes that continue to thrive into modernity. (Another is the tamal.) Its creation is credited to the indigenous Mixtec people, a pre-Aztec culture in the Mexican state of Oaxaca and parts of neighboring Puebla and Guerrero. The tetela itself goes back to Mesoamerican times. Yet only now are tetelas gaining widespread popularity across Texas. And they’re a prism through which taqueros and Mexican chefs can test their craft and imagination.

I first encountered tetelas at one of Garza’s stellar and short-lived Neighborhood Molino brunch pop-ups in McAllen in 2021. The triangular, nixtamalized-corn antojito (Spanish for snack, but it literally translates to “little whim”) encased hibiscus–and–red chile–braised mushrooms and quesillo. Hibiscus leaves were pressed into the exterior of the masa, making for an eye-catching meal. During the pop-up’s run, Garza also created patterns in their tetelas by mixing different colors of masa.

Since moving to Austin in January 2022, Garza has continued experimenting with tetelas at Nixta Taqueria, but they are deliberate in staying true to the dish’s roots. “Tetelas are a way to highlight Indigenous Mexican foods and corn’s diversity, and are, personally, the most artistic mediums for masa,” Garza says.

The traditional fillings for tetelas are black beans cooked down with fragrant epazote and stringy, milky cheese. Corn and mushrooms are also popular. But Garza expands the boundaries with fillings like quesillo rajas (Oaxaca cheese with roasted strips of poblano chiles), pipián (a slightly sweet and nutty pumpkin-seed mole), and requesón (a Mexican cottage-cheeselike product). The exterior should be toasted on a griddle or comal, although some cooks will fry tetelas. Garza insists oil isn’t needed, but they admit a small amount might add a nice, brown crust for texture and audible crunch. “It depends on what the cook is going for with their tetela,” they tell me.

Garza is just one of the chefs pushing tetelas to increasing popularity statewide. In Dallas, José executive chef Anastacia Quiñones-Pittman serves tetelas as more than a mere antojito. Rather, AQ, as the chef is known professionally, offers them as an appetizer requiring utensils. Her latest version features sautéed spinach and tangy goat cheese. The tetelas, made from nixtamalized, creamy bolita amarilla corn from Masienda, are propped up against each other on a pale green pool of pipián verde. It’s a lovely dish.

“Customers love them because they’re not too different from a quesadilla, as well as for their unique shape,” AQ says. She and her staff (specifically the two tías [aunties], as she calls them) make tetelas their own. An earlier variation at José was stuffed with stretchy quesillo, chopped mushrooms, and rajas and served alongside earthy aged mole and a dollop of crema. The type of corn the restaurant uses changes too. It recently used Oaxacan sangre de toro corn from Houston-based purveyor Agropa, which has a purple hue that turns a reddish brown when cooked.

In Houston, chef Emmanuel Chavez occasionally includes tetelas on the Saturday tasting menu at his restaurant, Tatemó. Chavez treats tetelas simply, allowing them to shine on their own merits with little flourish. At one dinner, a lone tetela was embossed with a small leaf of hoja santa, the Mexican herb with a licoricelike flavor.

Whether done up with all the frills on a plate or served humbly to eat on the go, the tetela is a triangular canvas for a robust imagination. And, luckily, we have a lot of wonderful artists in the state.

Where to Try Tetelas in Texas