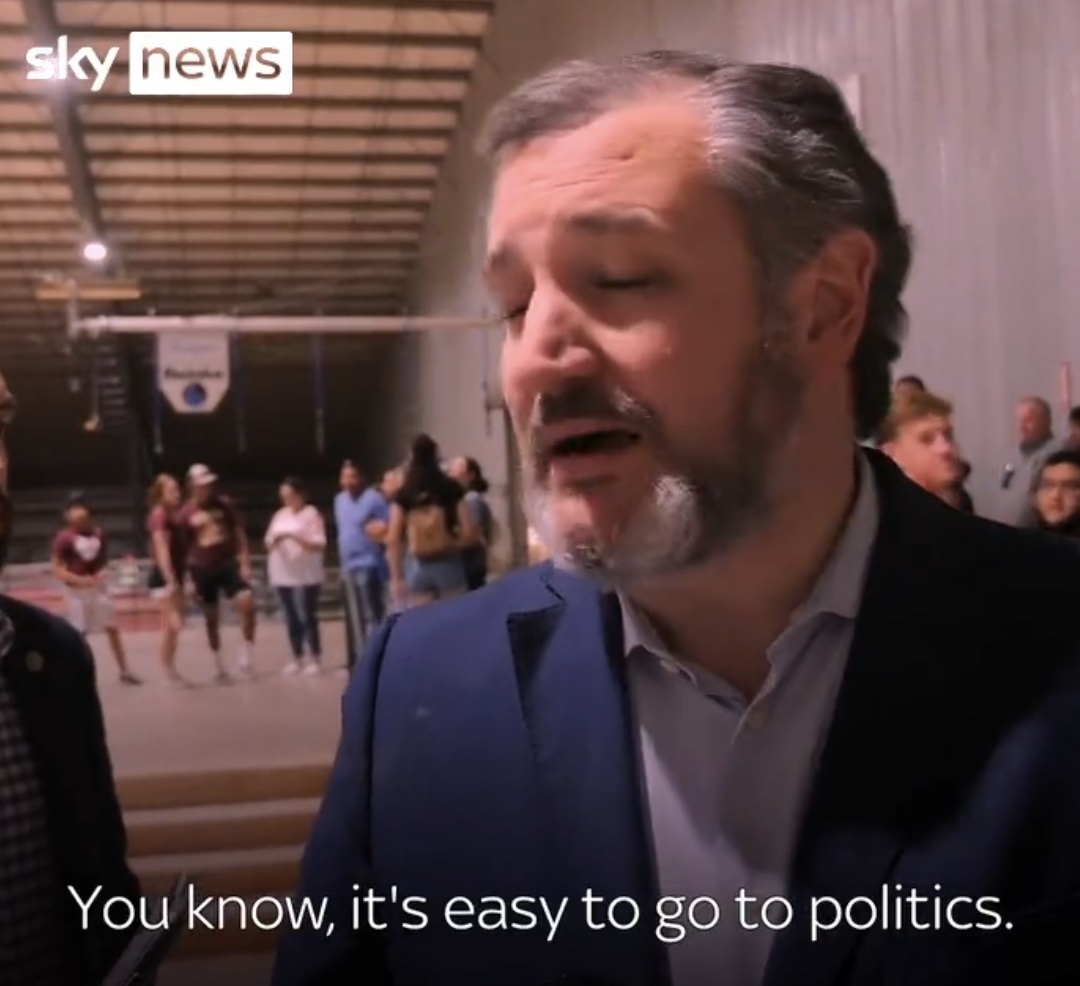 A Sky News reporter cornered Republican Senator Ted Cruz to ask him questions about gun reform laws after the mass school shooting in his state. It didn’t go well for the Republican/NRA talking points.

Watch as Senator Ted Cruz walks away from reporter after being asked if “this is the moment to reform gun laws.” But first, the Texas Republican tries out his party’s special interest donor’s favorite talking points about mental illness and how this is not the time to discuss “politics.”

Let’s dive into just how rotten Cruz’s talking points are after the video:

“Why only in America?”

US Senator Ted Cruz walks away from @Stone_SkyNews after being asked if “this is the moment to reform gun laws” https://t.co/d2oBaP4KvW#TedCruz #America #Texasshooting #gunlaws pic.twitter.com/gL4TYeg04t

“Is this the moment to reform gun laws,” Senator Cruz is asked hours after 19 children and two other people were slaughtered in a Texas elementary school by an 18 year old who had access to two military style weapons.

Cruz dodges, “You know it’s easy to go to politics.”

Reporter Mark Stone has to remind Cruz that this actually matters: “It’s important. It’s at the heart of the issue.”

Cruz then takes a warm bath in the stale Republican refuge of Game the Ref/Blame the Media that works so well for them with our national media: “I get that that’s where the media likes to go. ”

Sky News reporter reminds Cruz that he is doing his job of asking the questions most people want answered (and, you know, allegedly Ted Cruz works for these people): “It’s not, it’s where many of the people we’ve talked to here like to go.”

So Cruz switches gears, pulling out more moldy NRA laundry perhaps not realizing that this, too, leads back to Republican policy sabotage of Americans’ safety: “The proposals from Democrats and the media, inevitably, when some violent psychopath murders people–”

Stone interrupts this fungus of a talking point, but first, let’s remind everyone that if mental health were the issue, not only would other countries be suffering the same fate as this one, but it was Republican president Donald Trump who reversed an Obama-era regulation that made it harder for people with mental illnesses to buy a gun. This rule would have applied to people receiving Social Security for mental health issues and people deemed unfit to handle their own affairs.

Stone: “A violent psychopath who is able to get a weapon so easily. An 18 year-old with two AR-15s,” Stone says with the kind of incredulity that reveals he isn’t from the United States and hasn’t yet been indoctrinated to our “freedoms.”

Cruz, trying to regain the footing of moral superiority and smug removal that usually works for him: “If you want to stop violent crime, the proposals the Democrats have, none of them would have stopped this.”

This, of course, is a blatant lie wrapped up in a strawman. His premise is mental illness is the cause and yet, his party reversed a regulation from President Obama (which followed the mass shooting at Sandy Hook Elementary School) that addressed this, and right now, the Senate has not acted on for two years HR8, bipartisan gun control passed by the House. They haven’t moved on it because they knew it was doomed due to filibuster rules and two “Democrats” who refuse to do much to help people because they are protecting their own careers.

But also, Greg Abbott signed into law a piece of legislation that bars local authorities from acting on federal legislation restricting guns. It’s called the Second Amendment Sanctuary Act. Texas is quite the gun sanctuary. Guns are safe, children are not.

So, Cruz is basically saying nothing Democrats are offering would help, he won’t offer anything that would help, and if he could it would be mental health but oops, Obama did that and Republicans reversed it, so anyway NEENER NEENER nothing can help, Cruz and his fellow Republicans are impotent to help, but please continue to pay their salary and health insurance and benefits.

Banning assault weapons would have made “this”, aka, the slaughter of our children while they are in school and the race-related slaughter days ago of innocent people grocery shopping in Buffalo, a lot more difficult – as is evidenced by statistics from every other country.

Cruz’s comments argue we should continue to DO NOTHING, except more guns for the gun manufacturer lobby so they can make more money. (Republicans are already pushing for arming teachers and more armed officers in schools, even though there were armed officers at Robb Elementary and that didn’t work and our children shouldn’t be going to school in a war zone.)

Back to our Sky Reporter who is giving a master class in just how insipid and polite to power our own media has become: “But why does this only happen in your country? I really think that’s what many people around the world just… they cannot fathom. Why only in America? Why is this American exceptionalism so awful?”

Cruz, clinging to the goal post as he moved it, slyly suggests that Stone basically hates America instead of addressing the fact that the entire world can’t understand why people like him refuse to stop the slaughter of Americans: “You know, I’m sorry you think American exceptionalism is awful.”

Stone, undeterred from this low but common knee cap that usually silences American media: “I think this aspect of it.”

Cruz, like a caged animal who’s finally found his exit and it’s marked ‘Because you don’t think children being slaughtered at school is exceptional, you have a political agenda’:  “You know what? You’ve got your political agenda–”

Cruz, putting his hand on Stone’s shoulder as if he is the pastor when he is actually justifying doing nothing in the face of unthinkable evil: “- and God love you.”

At this point, Cruz begins his flight.

Stone: “Senator, it’s not, I just want to understand why you do not think that guns are the problem.”

Second reporter adds; “Why is this just an American problem?”

Stone: “It is just an American problem, Sir.”

Second reporter: “Mr. Cruz, why is America the only that faces this kind of mass shooting?”

Cruz is baited. He turns around to respond, having finally called up a talking point that will play well on Right wing media because it doesn’t answer the question and it tells them they are exceptional, special snowflakes.

Giving his best Clint Eastwood (pre-empty chair days) gritted teeth, intimidation stare down, Cruz: “Why is it that people come from all over the world to America? Because it’s the freest, most prosperous, safest country on Earth. And stop being a propagandist.”

Who’s the propagandist here? Only a Republican could suggest this is the freest, most prosperous, safest country on Earth hours after yet another  mass shooting and in the midst of taking half the population’s freedom from them, as they complain daily that America is actually horrible and not prosperous because a Democrat is in office.

With this, Cruz resumed his flight, showing his back to the reporters who dared to confront him with the questions a majority of this country are desperate to have answered.

Second reporter: “Why are kids dying in schools?”

And Ted Cruz is gone. Gone is his middle name. It’s what he does in crises.

Speaking of mental health, guns aren’t helping there: “A 2016 study published in the American Journal of Public Health found there was a strong relationship between higher levels of gun ownership in a state and higher firearm suicide rates for both men and women.”

So far this year, we have had over 200 mass shootings and 27 school shootings.

Furthermore, the BBC addresses the statistics of America versus other countries. This image speaks volumes:

Guns are now the number one killer of children in this country, surpassing automobile accidents.

Texas Republican Governor Gregg Abbott signed 22 pieces of legislation making getting and carrying a gun easier in the last year, including unlicensed carry, lower minimum age, no federal limits. Sure, we can’t prove that lessening those specific laws would have changed this specific outcome. But that doesn’t change the fact that making guns easier to get than Sudafed is a deadly and provably failed platform, and it does not fit with the image Republicans try to sell of being “family values.”

Gun laws do work, as a whole. The evidence is there, Republicans know this. They are only pretending to not understand because they’re afraid of the NRA. It took a Sky News reporter to push a Republican Senator on this and refuse to back down.