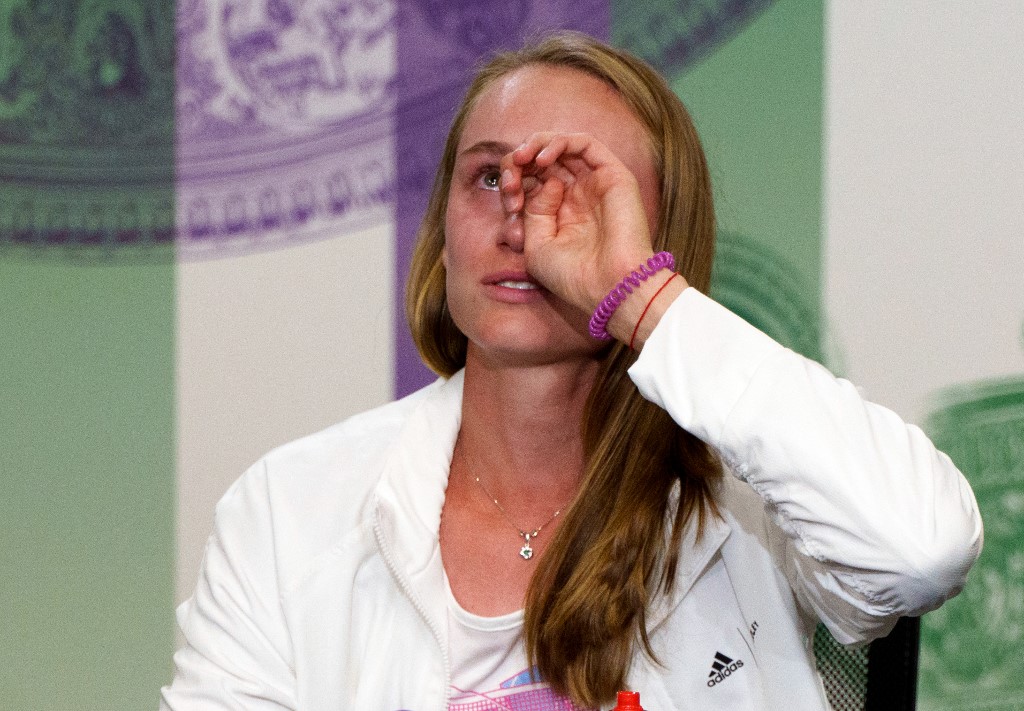 Kazakhstan’s Elena Rybakina cries as she gives a press conference in the Main Interview Room after winning against Tunisia’s Ons Jabeur in their women’s singles final tennis match on the thirteenth day of the 2022 Wimbledon Championships at The All England Tennis Club in Wimbledon, southwest London, on July 9, 2022. (Photo by Joe TOTH / various sources / AFP)

Newly crowned Wimbledon champion Elena Rybakina broke down in tears on Saturday after she was again confronted by questions over her Russian roots.

Rybakina, born in Moscow but representing Kazakhstan after switching allegiances in 2018, defeated Ons Jabeur in the women’s final.

Her triumph came at a tournament where her Russian compatriots were banned following the invasion of Ukraine.

“I don’t know what’s going to happen. It’s always some news, but I cannot do anything about this,” said the 23-year-old when asked if the Russian government would be tempted to politicize her Grand Slam triumph.

“I’m playing for Kazakhstan a very long time. I represent them on the biggest tournaments, Olympics, which was a dream come true.”

Russian tennis chief Shamil Tarpischev, however, hailed Rybakina’s victory as a triumph for Russia, describing the player as “our product”.

Rybakina’s parents live in Moscow. She has been reluctant throughout the tournament to elaborate on how much time she spends in the country.

When she was pressed further Saturday and invited to condemn Russian President Vladimir Putin and the invasion, Rybakina pleaded for understanding.

“I didn’t choose where I was born. People believed in me. Kazakhstan supported me so much.

“Even today I heard so much support. I saw the flags. So I don’t know how to answer these questions.”

Rybakina wept towards the end of her news conference when asked to describe her parents’ reaction to her Grand Slam win.

“Probably they’re going to be super proud,” she said as the tears came. “You wanted to see emotion… Kept it too long.”

Rybakina had celebrated her first Slam triumph with a low-key, routine handshake at the net.

Jabeur teased that she would have to teach the new champion how to celebrate such a momentous moment.

“I’m always very calm,” explained Rybakina. “Maybe because I believed that I can do it, deep inside.”

Rybakina admitted she had suffered stage fright in the first set on Saturday when she dropped serve twice and committed 17 unforced errors.

But she composed herself to romp through the next two sets, winning 12 of 16 games.

“Today I was too stressed out. I think I didn’t enjoy it as much as I should maybe. I enjoyed more the semifinal,” she said.

Rybakina is $2.4 million better off after Saturday’s victory.

However, she is looking forward more to being a life member of the All England Club, a perk reserved for all champions.