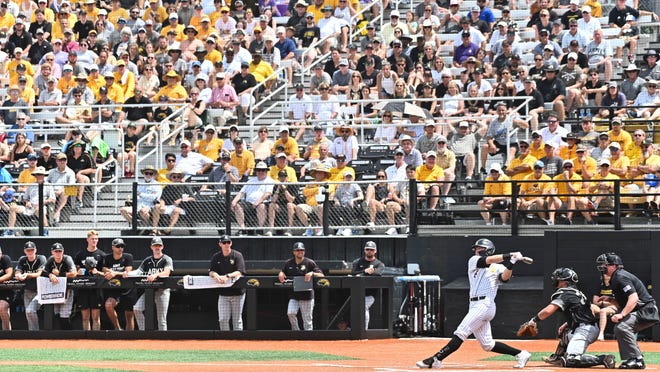 Some viewed a potential Saturday clash with a high-powered LSU lineup as a more viable spot for Berry to play his ace card.

But the Golden Eagles needed every bit of Hall’s sparkling performance in a 2-0 victory over the Black Knights. The sophomore pitched eight scoreless innings, featuring a changeup that ducked and darted to keep a speedy Army lineup off the base paths.

The depth provided by Hall’s outing could prove crucial as the Golden Eagles await the winner of LSU vs Kennesaw State.

Berry said he’d planned to use standout reliever Landon Harper for two innings, but Hall’s efficiency through the middle innings ensured the nine pitches Harper used to close out the ninth marked the only stress Berry needed to place on his bullpen.

Hall’s stuff was almost untouchable early. He struck out eight of the first 11 Black Knights before Army even registered a baserunner.

Hall said a strong fastball command enabled him to let loose with his changeup — the pitch he danced all around the strike zone to generate many of those whiffs.

“Sometimes I’ll put my hand around it a little bit, and it’ll get a little side-spin and that will make it cut,” Hall said. “Other times when I really get through it, it will really go down and in on a righty. As long as I can control it and throw it over the plate, it kind of puts the hitter on their heels.”

Catch Up On The Action:Southern Miss baseball vs Army in Hattiesburg Regional: Live score updates

By the middle innings, the Black Knights had adjusted to put the ball in play more frequently. Hall said he didn’t make a conscious effort to pitch to contact more, but it played into his hands.

His slightly inflated pitch count leveled off, and, with 102 pitches under his belt through seven innings, Berry felt comfortable enough to push his starter for one more.

“I felt like he was getting stronger as he was going,” Berry said. “The strikeouts weren’t there, but he was inducing the ground balls and the early contact.”

Now the Golden Eagles move into Saturday’s winner’s bracket contest with a full complement of pitching available. Berry declined to say which starter he’ll use. Righthander Hunter Riggins has been the regular Saturday starter

And while Hall’s outing certainly sets USM up in a positive position, the Golden Eagles needed that kind of excellence just to ensure they won Friday.

Southern Miss left seven men on base in the first four innings and missed two opportunities to drive in a runner from third with less than two outs.

In total, they stranded nine runners – kept largely off-balance by Army left-handed starter Connelly Early. That number is going to have to shrink if Southern Miss wants to be playing this time next week.

Overturn of Roe vs. Wade leads to reactions across Mississippi