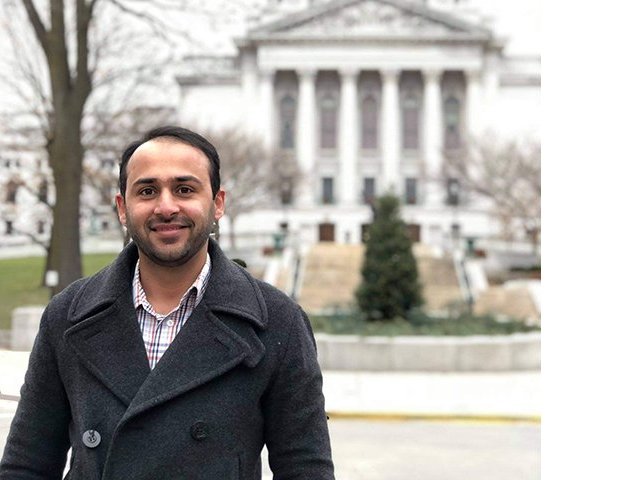 Hagedorn be damned — Madison Ald. Syed Abbas is running for a seat in the state Assembly. But the Wisconsin Supreme Court’s latest decision on redistricting — with the deciding swing vote from Justice Brian Hagedorn — released late on April 15, did throw a wrench in Abbas’ original plan to stay in Madison and continue to serve on the city council.

“I wasn’t too surprised by the [state] Supreme Court’s decision, knowing the GOP has a lot of control in state politics,” says Abbas. “But I am extremely disappointed by the court’s decision to go with the Republican maps and the lack of transparency in our judicial system.”

Abbas will now campaign to represent District 46 in the Assembly, currently held by state Rep. Gary Hebl (D-Sun Prairie), who is retiring. He’s the second Democrat to join the race. Dane County Board Supv. Melissa Ratcliff announced April 13 in a press release that she is also running for the seat.

Just two hours before the Wisconsin Supreme Court released its latest redistricting ruling on April 15, Abbas announced he was running for Assembly in District 37. That seat is currently held by Republican Rep. William Penterman from Columbus.

The alder was assuming that the state Supreme Court would more or less stick with the redistricting map proposed by Gov. Tony Evers, which was adopted by the high court on March 3. Abbas says he was advised by the Democratic Party of Wisconsin to assume the boundaries for District 37 wouldn’t change, even though the state Supreme Court was in the process of reviewing the maps once again because the U.S. Supreme Court, on March 23, rejected the governor’s map and sent the matter back to the state high court, presumably giving it enough time to adopt new maps before the Aug. 9 primary. That decision took issue with Wisconsin’s high court approving maps that created an additional Black-majority district near Milwaukee.

“The [Democrats’] legal team gave advice that candidates should move forward using Evers’ maps. It was expected the [Wisconsin] Supreme Court might make some changes in the Milwaukee area, but the rest of Evers’ map would stay the same,” Abbas tells Isthmus. “That made sense to me because the state Supreme Court had already adopted Evers’ map.”

But conservative justices had different plans.

Hagedorn had originally sided with the court’s liberals on March 3 to adopt Evers’ redistricting map over the proposal put forth by GOP lawmakers. But in the court’s April 15 ruling, Hagedorn sided with conservative justices to adopt the Republicans’ redistricting proposal, arguing that the court had run out of time for any other option. The decision means that the GOP district lines will be in place for at least the upcoming elections in 2022. An analysis by the Milwaukee Journal-Sentinel found the map favors Republicans even more than district lines adopted in 2011 under former Gov. Scott Walker, when Republicans controlled all of state government.

Unlike the governor’s map, the boundaries for District 37 under the GOP plan do not overlap with Abbas’ aldermanic district. So Abbas’ initial plan to continue to serve on the Madison Common Council if elected to the Assembly is no longer possible. District 46 does not overlap with Abbas’ council district either and he does not live in the district north of Madison at the moment. That will be changing soon. Abbas plans on moving into District 46, mostly likely Sun Prairie, this summer. This will cut short Abbas’ time serving as a Madison alder.

“I’m not going to resign from the council immediately. I am going to continue campaigning for Assembly while looking for some reasonable accommodations, maybe buying a house, somewhere in District 46,” says Abbas. “It isn’t the decision I thought I would be making last week. But I do think it’s the best move forward given the circumstances and the work I’ve already done to build support for my campaign.”