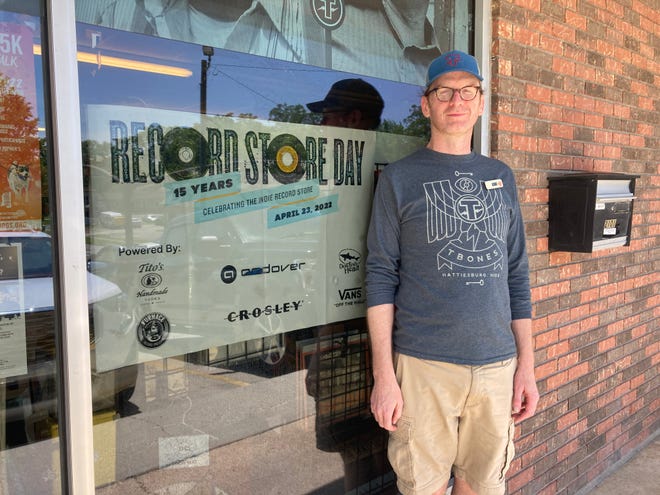 If you ask Mik Davis, record store manager of T-Bones Records and Cafe, he’ll tell you that international Record Store Day is special because it brings people together over a common interest.

“To me, the importance of Record Store Day tying into what we do is that it promotes the importance of the record store as a sense of being a part of the community we’re in,” Davis said. “People travel in just to come to the record store, so sort of having this series of zones of people come in and congregate all around the same thing is sort of a throwback to what retail used to be.”

Saturday is Record Store Day 2022, a “holiday” that began in 2008 as an annual, international celebration of nearly 1,400 independently-owned record stores across the U.S. and thousands more across the world.

T-Bones will mark its 13th recognition of the occasion with special releases including rare and out-of-print records along with Record Store Day exclusives and live music beginning at 11 a.m.

Downtown Hattiesburg’s revitalization:Who are the people who are making it possible?

“Anyone who wants it is going to need to be here as early as humanely possible,” Davis said.

The store will open at 8 a.m. Saturday, and he expects a line of about 75 people to be there.

“It’s a pretty fun line. You’ll probably make some friends,” Davis said. “It’s a lot of important releases and a lot of fun releases too. A lot of things that people are going to see are throwbacks of what they might have listened to 10, 20 years ago that are going to kind of relight that nostalgia bulb in their head.”

Though the appeal of the physical format of vinyl has become obsolete for many, there is still a community of people who feel strongly about keeping it alive.

“It only makes sense that you would want to come and flip through the records and pick up CDs and have those tangible products in your hand, because so much of what we do as far as listening revolves around something that’s really either not there or temporarily streaming into your phone or device,” Davis said.

“The sheer tactility of having a record, its artwork, the work that went into it to make something that you have ownership of is an experience that’s not like too many others. We buy things that we need out of utility. We buy things that we want out of recreation. Music sort of falls in between both of those.”

According to RecordStoreDay.com, there are 10 locations throughout Mississippi participating in the event. Click here for a complete list.