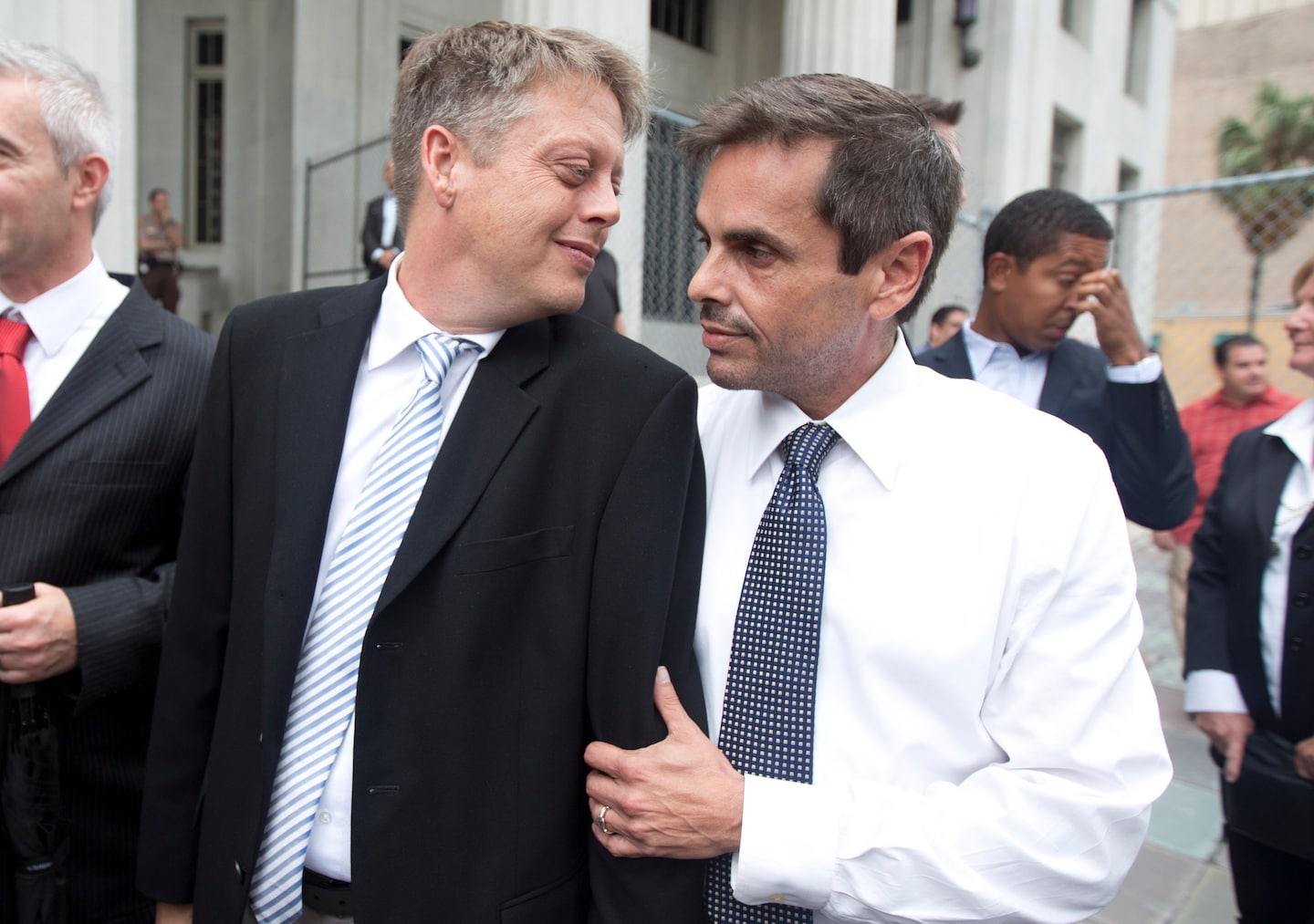 In early January, Jorge Diaz-Johnston’s body was discovered in a landfill some 87 miles from where he was last seen in Tallahassee. The body was wrapped in bed linens, and an autopsy later concluded Diaz-Johnston died by strangulation.

His death sent shock waves throughout Florida. Not only was Diaz-Johnston the younger brother of Miami’s former mayor Manny Diaz, the 54-year-old was also a plaintiff in a historic lawsuit that cleared the way for same-sex couples to marry in Miami-Dade County.

“It’s an unspeakable tragedy,” Cathy Pareto, another plaintiff in the marriage lawsuit, told the Tallahassee Democrat in January, adding: “I can’t comprehend who would ever hurt this poor man.”

Now, a grand jury has indicted Diaz-Johnston’s roommate, 36-year-old Steven Yinger, on charges of first-degree murder, tampering with evidence, theft of Diaz-Johnston’s possessions and fraudulently using Diaz-Johnston’s personal information. The indictment, filed Thursday, charges that Yinger strangled Diaz, moved his body and stole his BMW and iPhone. Yinger is being held without bail.

An attorney for Yinger did not immediately respond to a request for comment from The Washington Post early Monday.

“I still can’t believe he’s gone,” Don Diaz-Johnston, Jorge’s husband, told WTVJ after the indictment was filed. “I’m still struggling with the reality of that. It’s been tragic.”

At the time of Jorge’s death, the couple was going through a divorce and living apart, according to court documents. Jorge, who was living in an apartment in Tallahassee with Yinger, worked as a paralegal and was beginning a “new chapter” in his life. But on Jan. 7, Jorge’s workplace notified Don that Jorge had not shown up to the office for several days.

Later that day, Don reported his husband missing. Around that time, Yinger was stopped by police while driving Jorge’s BMW without a valid license.

According to court records, Yinger told a couple of different stories about Jorge’s whereabouts around the time of his death. He told Raheem that Jorge had gone to Don’s house because the couple had gotten back together, which Don told police was not true. Yinger told his girlfriend that Jorge was in Miami — so she found it strange when, on Jan. 5, she heard Jorge’s phone ring at the apartment the men shared.

Jorge’s body was found at a landfill in Jackson County wrapped in bed linens that police say were his own, court records state. He was also surrounded by discarded mail from the Tallahassee area. A garbage transfer station in Tallahassee told police that garbage from Jorge’s street would have been picked up and transferred to the Jackson County landfill.

He was a champion of LGBTQ rights in Florida. Police are investigating how his body ended up in a landfill.

Police found the trash can belonging to Jorge’s apartment down the street from his residence. It contained what they later determined was Jorge’s blood.

“Based on this information, it’s believed Jorge’s body was disposed of via residential solid waste pick-up,” a search warrant application states.

The indictment states that Yinger strangled Jorge between Jan. 3 and Jan. 5. An autopsy determined that Jorge was strangled “via ligature,” according to court documents. During a search of the men’s apartment, police found several cords that could have been used to strangle Jorge. They also found bedding in the recycling bin matching the linens that covered Jorge’s body at the landfill.

Manny Diaz, a former mayor of Miami and chairman of the Florida Democratic Party, told the Tallahassee Democrat he was grateful for the work of police and prosecutors in his brother’s case.

“I am profoundly appreciative of the outpouring of support shown to my family after the loss of my brother, Jorge Diaz-Johnston, earlier this year,” Diaz said. “We once again ask for privacy and continued prayers during this difficult time.”