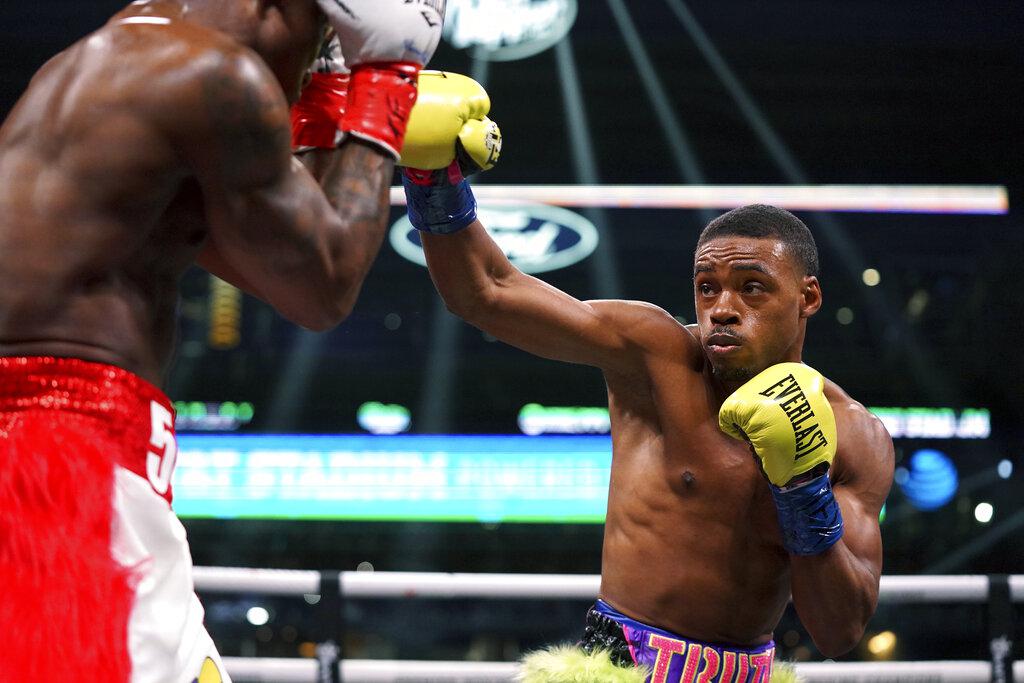 ARLINGTON, Texas — Errol Spence Jr. became a three-belt welterweight champion by defending his WBC and IBF titles in a unification bout in front of a home crowd, when his fight against Yordenis Ugás was stopped in the 10th round Saturday night because of the WBA champ’s right eye that was almost completely swollen shut.

The fight was scheduled for 12 rounds, but 1:44 into the 10th, referee Laurence Cole sent Ugás to a corner to have his eye checked out by a ringside doctor for the second time. Unlike two rounds earlier, when the fight was allowed to continue, it was stopped this time despite protests by Ugás.

Spence improved to 28-0 with his 22nd knockout, the first time in his last four fights the 32-year-old southpaw didn’t have to go the distance.

Ugás, the 35-year-old Cuban who dropped to 27-5, left the stadium in an ambulance and was being taken to a local hospital.

Cole had initially sent Ugás to the corner with just under a minute left in the eighth round, when the doctor spent an extended time checking the fighter’s peripheral vision before the fight resumed.

A few seconds later, Cole paused the round, picked up the mouthpiece and sent Spence to his corner to put it back in.

While Ugás stared Spence down at the end of the sixth, like he had already done several times, Spence and the crowd of 39,946 at AT&T Stadium were energized. Spence started pounding Ugás with body blows and shots to the face in the seventh.

Spence was back in the ring for his first bout in more than 16 months, since a 12-round unanimous decision over Danny Garcia in in December 2020. That was also at the home of the NFL’s Dallas Cowboys.

Now it appears there could be a fight between Spence and undefeated WBO champion Terence Crawford to crown an undisputed champion in the 147-pound division. Spence had said leading up to the fight that was he was aiming for that, and repeated that in the ring afterward.

Soon after the fight, Crawford tweeted congratulations to Spence, writing “great fight now the real fight happens. No more talk no more side of the street let’s go!!!!”

Crawford (38-0, 29 knockouts) last fought in November, a 10th-round TKO of former champion Shawn Porter when defending the WBO title for the fifth time since claiming it nearly four years ago.

Canelo Álvarez last November became the first undisputed four-belt 168-pound super middleweight champion when he stopped Caleb Plant in the 11th round. The Mexican pound for pound superstar added the IBF title to his own WBC, WBA and WBO belts.

It was Spence’s sixth defense of the IBF title he has held since May 2017. But it was only the second fight for the southpaw known as “The Truth,” and second defense of the WBC title he won with a split decision over Porter in September 2019.

A month after beating Porter in 2019, Spence flipped his Ferrari while speeding on a Dallas street in the early morning hours. Spence was ejected, but didn’t sustain any broken bones or fractures and was treated for facial lacerations.

Spence got the go-ahead for training again after doctors told him he had no bleeding on his brain. He returned to the ring with a unanimous 12-round decision over Garcia.

But there was another setback when he was preparing for a bout against eight-division world champion Manny Pacquiao last August. Spence suffered a torn retina while training, and Ugás replaced him in that bout on 11 days’ notice — and won a 12-round unanimous decision over Pacquiao.

That was the fourth win in a row for Ugás since a loss in a WBC title fight against Porter in March 2019, about 6 1/2 months before Spence took over that belt.

Ugás had much more time to prepare to Spence, but lost for only the second time in 14 fights since his back-to-back losses in 2014.