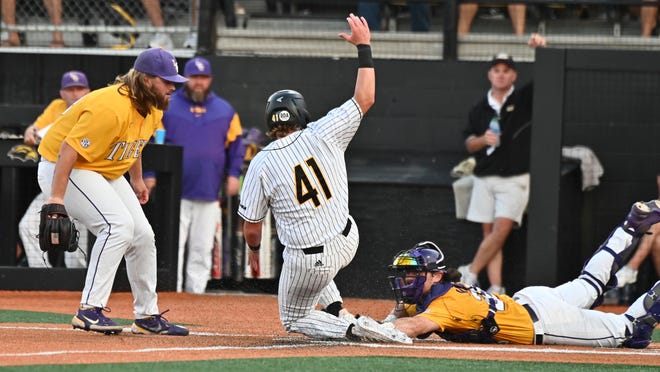 The Golden Eagles erased a three-run deficit Monday, blew their own three-run lead, then scored the decisive run in the top of the ninth to defeat LSU for the second straight day, 8-7, and win the Hattiesburg Regional title.

Southern Miss showcased a rugged determination in making history. After USM blew a four-run, ninth-inning lead to the Tigers on Saturday night, it came from behind in all of its next three games.

The Golden Eagles were down to their final three outs against Kennesaw State. Their starting pitchers allowed a combined six runs in four innings of work in two contests against LSU to close out the regional.

Southern Miss overcame it all, and the Golden Eagles will play on.

Southern Miss spent the entire weekend responding to gut punches, and the Golden Eagles got off the mat one final time to secure their victory.

After LSU scored twice in the seventh and once in the eighth to erase a three-run deficit and send the game to the ninth inning tied 7-7, Southern Miss’ offense went right back to work.

Christopher Sargent and Slade Wilks banged back-to-back singles, and Danny Lynch lifted a sacrifice fly to left to bring Sargent home with what turned out to be the winning run.

Southern Miss wasted opportunities with a runner on second base and nobody out in the fifth and sixth innings.

The Golden Eagles did not waste their third such chance.

USM sent nine batters to the plate against four different LSU pitchers in the seventh, needing only two hits to plate four runs and turn a 4-3 deficit into a 7-4 advantage.

Sargent’s sacrifice fly tied the game, then Wilks ripped a single into left field to score Dustin Dickerson and give Southern Miss its first lead since the first inning.

Gabe Montenegro finished off the rally, finding a hole with his ground ball single to right field that plated Lynch and Reece Ewing.

With the season on the line, Scott Berry gave the ball to his ace.

After throwing 109 pitches in an eight-inning outing against Army in the opener of the Hattiesburg Regional on Friday, Hall took the mound again on Monday.

Hindered in part by a Lynch throwing error at third base, Hall allowed three runs – two earned – in two innings of work. It probably wasn’t the outcome Berry had mapped out for Hall, but the Golden Eagles ensured it didn’t matter.