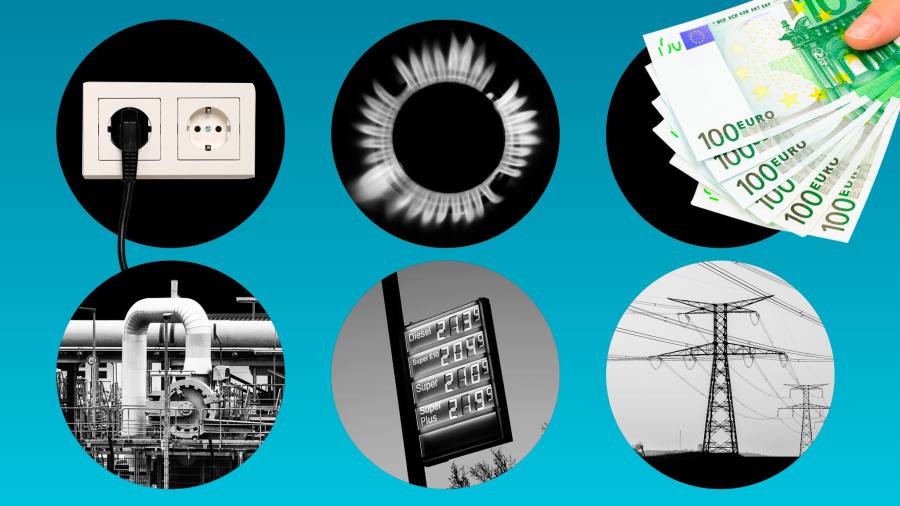 The four biggest EU countries have announced more than €80bn of measures to shield consumers and businesses from soaring energy prices exacerbated by Russia’s invasion of Ukraine — but economists warn many of these measures could prove counterproductive.

Germany, France, Italy and Spain have responded to the surge in energy prices by announcing plans to cut taxes or to fund rebates on fuel, electricity or natural gas, in an attempt to shield their economies from surging costs for companies and a drop in consumers’ disposable income.

Yet by softening the blow of higher energy prices, governments may aggravate the problem by reducing the incentive for households and businesses to reduce their consumption of electricity and fuel, while making it harder to wean off their dependence on Russian fossil fuels.

“This is terrible economics,” said Rüdiger Bachmann, economics professor at the University of Notre-Dame. “You want the price mechanism to have its effect, by signalling that a good is scarce, so people decide if they want to change their behaviour.”

Many European countries are transferring money to vulnerable groups to help them cope with higher consumer energy prices, which have risen 45 per cent in the eurozone in the past year mainly as a result of tighter supplies. The Bruegel think-tank found only three of the 25 countries it assessed were not making such payments.

The French government has gone further by capping the increase in household electricity bills. EDF, the French state-owned energy group, estimated the cap would reduce earnings by €10bn when combined with a requirement to sell its nuclear power below wholesale rates.

“The subsidy on household energy is crazy — it reduces the incentive to reduce energy consumption,” said Klaus Adam, economics professor at the University of Mannheim. “Give everyone an amount each month and let them decide if they want to use it to pay the higher gas prices or if they want to save energy consumption and spend it on something else.”

Veronika Grimm, a member of the council of economic experts which advises the German government, criticised the latest package of measures announced by Berlin last week to help businesses with high energy prices.

The package will include “a time-limited and narrowly defined cost subsidy” for companies whose electricity costs have at least doubled since last year. “It is very unfortunate to subsidise the use of fossil fuels by directly subsidising energy consumption,” Grimm told Die Welt newspaper. “Ultimately, this keeps the gas price high on the exchanges.”

As part of Spain’s €16bn “shock plan” to address the fallout from the Ukraine conflict, it plans to cut fuel price costs in an attempt to defuse an unofficial transport strike that started last month. Spain is also working on a new scheme with Portugal to cap gas prices.

France last month announced a scheme to give a €0.15-per-litre rebate on fuel for four months from this month, while Germany’s €16bn plan to help households include a three-month cut in fuel prices by €0.30 per litre for petrol and €0.14 for diesel. Italy said in February it would spend about €6bn to help cut levies on energy bills, after already spending about €10bn trying to reduce consumer power costs.

By keeping demand high, economists say such measures could undermine an EU-led push to transition away from Russian energy imports. Brussels recently agreed a ban on Russian coal imports from this August and is debating a similar embargo on oil imports while working towards a plan to cut gas imports from the country by two-thirds over the next year.

Germany is resisting calls for an immediate EU embargo of all Russian energy imports. Five German economic institutes warned recently that such a move would cause a major recession in the country, sending output down 2.2 per cent next year and wiping out more than 400,000 jobs.

Lower household energy usage could be a key part of this shift away from Russian imports. “Household gas consumption offers substantial savings potential, for instance in heating, at a low economic cost,” said Katharina Utermöhl, senior economist at Allianz.

If all German households cut their room temperature by three degrees during colder months, Utermöhl estimated it would lead to a savings in gas consumption equivalent to the amount used by the country’s basic metal and food products sectors, which employ about 1mn people.