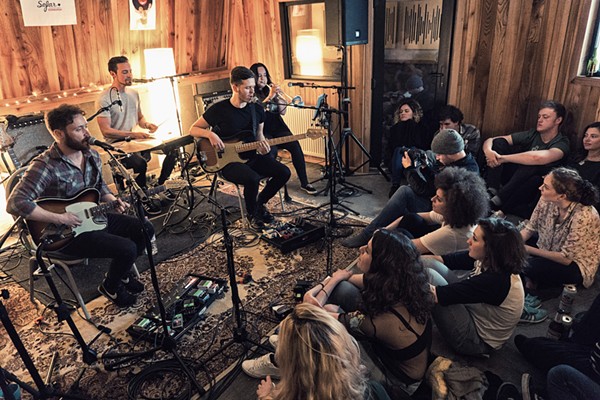 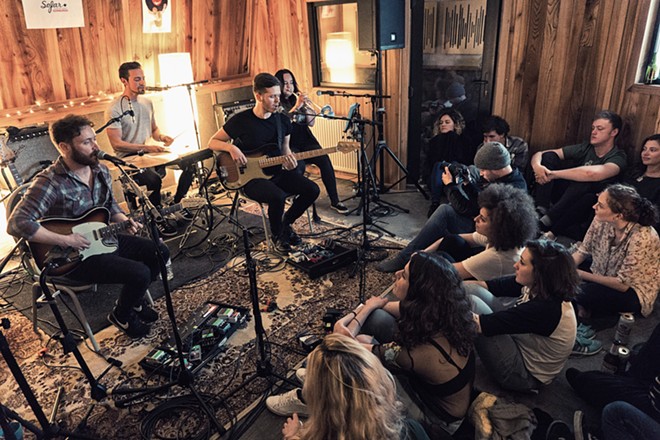 You never know what you’re going to get at a Sofar Sounds concert. The evening could bring rappers, metal bands, country singers, or all three on the same night.

That’s by design. The global secret concert series takes place at undisclosed locations that are only revealed 36 hours prior to the show, and you won’t know who’s even performing until you arrive.

The secret gigs began in London in 2009 and have since spread to more than 430 cities across the globe. Sofar Sounds officially came to Detroit in December of 2021, and has been going strong ever since.

“Each show has three acts from diverse genres that each play around a 25-minute set,” Kindra Parker, Detroit city lead for Sofar Sounds, tells Metro Times. “One time I had a harpist, a rapper, and a folk artist.”

She adds, “The people that come are music lovers. They don’t know what they’re going to get. I curate the show pretty tightly.”

Parker is a Detroit-based event curator who also does marketing and public relations for musicians. It’s up to her to choose the acts, and she doesn’t limit it to just music or local talent. National acts including comedians and spoken word poets have performed at Solar Detroit events as well.

Venues aren’t large-scale arenas or concert halls, either. Sofar Detroit gigs take over retail spaces, art galleries, and even residential homes, with attendees cozying up on the floor for an intimate experience. In Detroit, Sofar Sounds has taken over unexpected spaces like Norwest Gallery of Art, co-working space Seat Detroit, men’s clothing store George Gregory, and coffee shop Detroit Sip, among others.

“I’ve done the shows downtown, Midtown, west side, all over,” Parker says, noting the venues are always within Detroit city limits with an emphasis on small, local businesses.

The next Sofar Detroit gigs are scheduled for Friday, Sept. 30 in the McDougall-Hunt neighborhood, Friday, Oct. 7 in Grandmont, and Saturday, Oct. 15 in the University District. If you want more details, you’ll have to buy a ticket and wait. The Sofar Sounds website only lists the neighborhood, venue type, and whether the show is BYOB.

As a self-described music snob, Parker is confident in her ability to put together a captivating show. She has performed as a jazz vocalist and studied music production and engineering at Berkley College of Music. In other words, she knows good music when she hears it.

She says no one has walked away disappointed from a Detroit Sofar series concert yet, or complained they didn’t like the performers.

“It might not be everyone’s cup of tea as far as the genre, but the musicianship is always good,” she says. “They may not be the best, well-known acts, but whether they have heart or just a crazy good groove, they all have that thing.” A Sofar Sounds concert at a Detroit storefront.

The concert series prides itself on hosting previously “undiscovered” artists. Pop star Billie Eilish performed at a Sofar Los Angeles gig in 2016 before she gained mass popularity. And Ed Sheeran gave a Sofar Sounds concert in a small living room in Washington, D.C., in 2017 as part of a refugee support campaign with Amnesty International. He wasn’t an unknown artist at the time, but imagine seeing him play in a living room.

Parker says Sofar Detroit is all about creating a unique atmosphere for live music.

“The venues donate their space and host us so I look for venues that are supporters of the arts or are just looking to do fun, cool stuff,” she says. “It’s mostly floor seating, so we put tapestries on the floor and people bring their blankets and cushions. We have really ambient lighting and it’s just a vibe.”

Sofar Sounds hosted a few shows in Detroit before the COVID-19 pandemic, but Detroit didn’t become a full-time “Sofar city” until they scouted Parker on LinkedIn to curate the gigs.

“I had a chance to speak with the CEO and he actually knew so much about Detroit music, it was crazy,” she recalls. “He knew everything from Motown to J Dilla, which is so cool because he’s this billionaire and I didn’t expect that. I think when you think music, everybody thinks of Detroit.”

Speaking of Motown, Sofar Detroit has a partnership with the Motown Museum where it donates 15% of the ticket cost to the museum when you use the code “HitsvilleNext” at checkout.

Parker tells us the concert series will continue indefinitely and says that she’s always on the hunt for distinctive venues that want to host Sofar Sounds concerts.