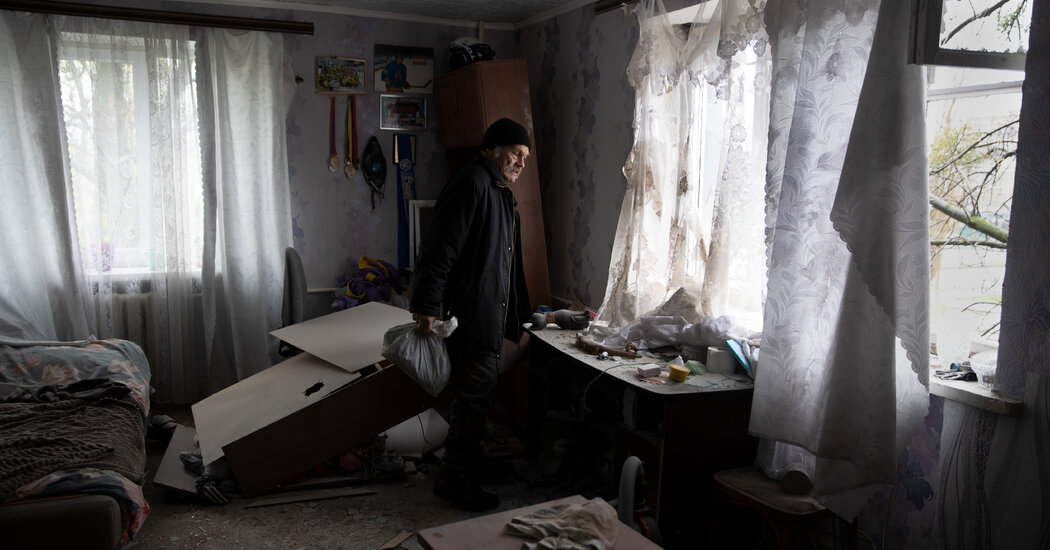 KHARKIV, Ukraine — When Russia launched its invasion of Ukraine in February, its strategy featured a rapid advance of tanks and helicopter assaults deep into the country — two strategies that ultimately failed and cost Moscow an untold number of casualties.

Now, with a narrower goal focused primarily on Ukraine’s east, the new military campaign that Russia said on Tuesday that it had begun will be much more methodical, according to Ukrainian and U.S. officials.

Instead of lightning attacks from the Russian front lines, Moscow’s forces — arrayed in a semicircle that stretches west to east from the city of Izium to Sieverodonetsk — have increased their artillery barrages and sent small detachments of troops to probe Ukrainian lines. Many of the Ukrainian troops that are in this region, known as the Donbas, are entrenched in earthworks that have been there for the better part of a decade.

Known as “shaping operations” in military circles, these smaller Russian attacks are often precursors to larger troop movements, or serve as a distraction from other fronts. In the past several days the Russians have sent around 11 more battalion tactical groups into the Donbas, bringing the number there to around 75, according to Pentagon officials. Each group has roughly a thousand troops.

In Horlivka, a city occupied by Russian-backed separatists, a resident said on Tuesday that, after a week of quiet, there was now heavy artillery fire coming from the Russian side, along with troop movements and Russian jets flying overhead.

There were strikes across Ukraine in the last several days signaling a new escalation: In Kharkiv, for instance, Russian artillery slammed into a frequently shelled residential area on Tuesday, killing at least three people. The lethal strike comes on the heels of two days of blistering rocket and artillery attacks into parts of the city that have been rarely hit in the past month.

Other cities like Zaporizhzhia, Lviv and Kyiv, the capital, were hit with cruise missiles and artillery fire as Russian forces prepared ground troops for their thrust in the Donbas, an industrial heartland in the east the size of New Hampshire.

One resident in Kramatorsk — one of the larger cities in the Donbas still in Ukrainian hands, which is likely to be one of Russia’s main targets in the offensive — stood and watched from a vantage point in recent days as the front line to the northwest of his city erupted in concentrated artillery barrages.

“Russian forces have started the battle for the Donbas that they have been getting ready for a long time,” Ukraine’s president, Volodymyr Zelensky, said in a video Monday night. “A very significant part of the Russian Army is now concentrated for that offensive.”

The two sides have been locked in a battle in the Donbas for the last eight years, with Ukrainian government forces fighting Russian-backed separatists. The coming battle, on wide-open terrain, will look significantly different from the urban warfare that took place around Kyiv, where the Russian military tried and failed to take the capital.

“Compared to the first few weeks of the war, this next offensive is a lot less decisive than it may seem,” said Michael Kofman, the director of Russian studies at CNA, a research institute in Arlington, Va. “No matter what happens in the Donbas, the costs are likely to be so high that the Russian military will be a spent force.”

While Russian forces are probing Ukrainian front lines and putting forces into position in the northern reaches of Donbas, the fight in the south — around the city of Mariupol — has turned into a full-blown siege, with the encircled Ukrainian defenders there barely holding out. Thousands of civilians have been wounded or killed in the monthlong battle, according to Ukrainian officials.

Svitlana Grebinyk, 46, said she last heard from her son there, a Ukrainian marine, on April 12. He had sent a message to her daughter on Instagram.

Possible banned weapons. Based on evidence reviewed by The Times, it is likely that Ukrainian troops used cluster munitions in an eastern village that they were attempting to retake from Russian forces. The weapons are banned by many countries for the harm they can cause to civilians.

Russia’s economy. While President Vladimir V. Putin boasted that the Russian economy is holding up under Western sanctions, his central bank chief warned that the consequences were only beginning to be felt, and Moscow’s mayor said that 200,000 jobs are at risk in the capital alone.

She paraphrased him: “I don’t have a way out. We have no other choice. We will most likely be in captivity.”

Capturing Mariupol is a key part of the Russian campaign in Ukraine’s east. The city’s fall would allow Russia to complete a land bridge between Russian territory and occupied Crimea. It would also allow Russian forces to reconstitute and push north to Ukrainian positions around the city of Zaporizhzhia. This could enable them to put added pressure on Ukrainian troops from the north and the south, stressing supply lines and other resources.

Tetiana Plysenko, 61, a resident of Huliaipole, one of the towns north of Mariupol that is on the front line, said little had changed in the last few days. The shelling continues unabated, though on Saturday there was an airstrike near the town — a rarity, another resident of the town said.

“Some people,” Ms. Plysenko said, “have come back and tended their gardens recently.”

Ukrainian forces have responded in kind to the Russian escalation, firing their own artillery — a mixture of howitzers, mortars and unguided rockets — to disrupt and delay any larger attack.

But despite supplies and renewed commitments from the United States and other NATO countries, Ukrainian officials continue to voice deep concerns about their own supply of ammunition and whether it will be sufficient to keep the advancing Russian forces at bay.

The Ukrainian military “repulsed seven enemy attacks, destroyed 10 tanks, 18 armored units and eight vehicles, one artillery system, and an enemy mortar,” the Ukrainian Ministry of Defense said in a statement on Tuesday. Those claims could not be independently verified.

Cryptocrash: ‘I was arrested for knocking on Luna boss’s door’

Why Africa couldn’t get urgent global deal on drought