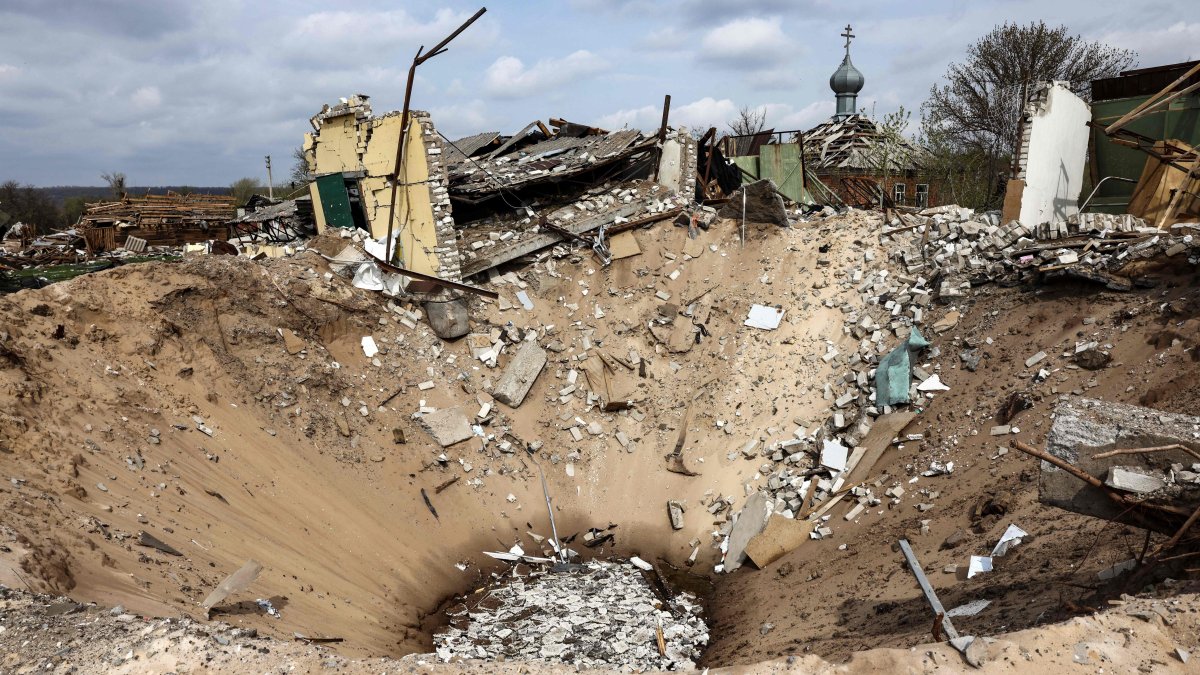 Russia assaulted cities and towns along a boomerang-shaped front hundreds of miles long and poured more troops into Ukraine on Tuesday in a potentially pivotal battle for control of the country’s eastern industrial heartland of coal mines and factories.

If successful, the Russian offensive in what is known as the Donbas would essentially slice Ukraine in two and give President Vladimir Putin a badly needed victory following the failed attempt by Moscow’s forces to storm the capital, Kyiv, and heavier-than-expected casualties nearly two months into the war.

The eastern cities of Kharkiv and Kramatorsk came under deadly attack. Russia also said it struck areas around Zaporizhzhia and Dnipro west of the Donbas with missiles. Multiple explosions were heard early Wednesday in the southern city of Mykolaiv, the regional governor said. A hospital was reported shelled earlier in the nearby town of Bashtanka.

In Mariupol, the now-devastated port city in the Donbas, Ukrainian troops said the Russian military dropped heavy bombs to flatten what was left of a sprawling steel plant and hit a hospital where hundreds were staying.

In what both sides described as a new phase of the war, the Russian assault began Monday along a front stretching more than 300 miles (480 kilometers) from northeastern Ukraine to the country’s southeast. Ukraine’s military said Russian forces tried to “break through our defenses along nearly the entire front line.”

Ukrainian President Volodymyr Zelenskyy said the Russian military was throwing everything it has into the battle, with most of its combat-ready forces now concentrated in Ukraine and just across the border in Russia.

“They have driven almost everyone and everything that is capable of fighting us against Ukraine,” he said in his nightly video address to the nation.

Despite Russian claims of hitting only military sites, they continue to target residential areas and kill civilians, he said.

“The Russian army in this war is writing itself into world history forever as the most barbaric and inhuman army in the world,” Zelenskyy said.

A senior U.S. defense official, speaking on condition of anonymity to discuss the Pentagon’s assessments of the war, said the Russians had added two more combat units, known as battalion tactical groups, in Ukraine over the preceding 24 hours. That brought the total number of units in the country to 78, all of them in the south and the east, up from 65 last week, the official said.

That would translate to about 55,000 to 62,000 troops, based on what the Pentagon said at the start of the war was the typical unit strength of 700 to 800 soldiers. But accurately determining Russia’s fighting capacity at this stage is difficult.

The U.S. official said the offensive in the Donbas has begun in a limited way, mainly in an area southwest of the city of Donetsk and south of Izyum.

President Joe Biden is expected to announce a new weapons package in the coming days that will include additional artillery and ammunition, according to a U.S. official, who was not authorized to comment publicly and spoke on the condition of anonymity.

Western arms have played a key role in enabling the outgunned Ukrainians to hold off the Russians.

Associated Press journalists in Kharkiv said at least four people were killed and three wounded in a Russian attack on a residential area of the city. The attack occurred as residents attempted to maintain a sense of normalcy, with municipal workers planting spring flowers in public areas.

In Bashtanka, an unspecified number of people were wounded when Russian forces shelled the hospital, destroying the reception area and the dialysis unit, the head of the regional council, Hanna Zamazeeva, said on Facebook. Bashtanka is about 70 kilometers (40 miles) north of Mykolaiv.

Key to the campaign is the capture of Mariupol, which would deprive Ukraine of a vital port and complete a land bridge between Russia and the Crimean Peninsula, seized from Ukraine in 2014. It would also free up Russian troops to move elsewhere in the Donbas.

A few thousand Ukrainian troops, by the Russians’ estimate, remained holed up in a sprawling Mariupol steel plant, representing what was believed to be the last major pocket of resistance in the city.

Russia issued a new ultimatum to the Ukrainian defenders to surrender Wednesday after a previous ultimatum was ignored. The Russian Defense Ministry said those who surrender will be allowed to live and given medical treatment. There was no immediate response from the Ukrainian troops, but they have repeatedly vowed not to give up.

Instead, the deputy commander of the Azov regiment, who was among the troops remaining in Mariupol, said the Russian military dropped heavy bombs on the steel plant and hit an “improvised” hospital. “We are pulling people out from under the rubble,” Sviatoslav Palamar told Radio Liberty.

Officials in Lviv say at least seven people were killed by Russian missile strikes in the western Ukrainian city on Monday.

Serhiy Taruta, the former governor of the Donetsk region and a Mariupol native, also reported the bombing of the hospital, where he said 300 people, including wounded troops and civilians with children, were sheltered.

The reports could not be independently confirmed.

Zelenskyy said the Kremlin has not responded to a proposal to exchange Viktor Medvedchuk, the jailed leader of a pro-Russia party, for the Mariupol defenders.