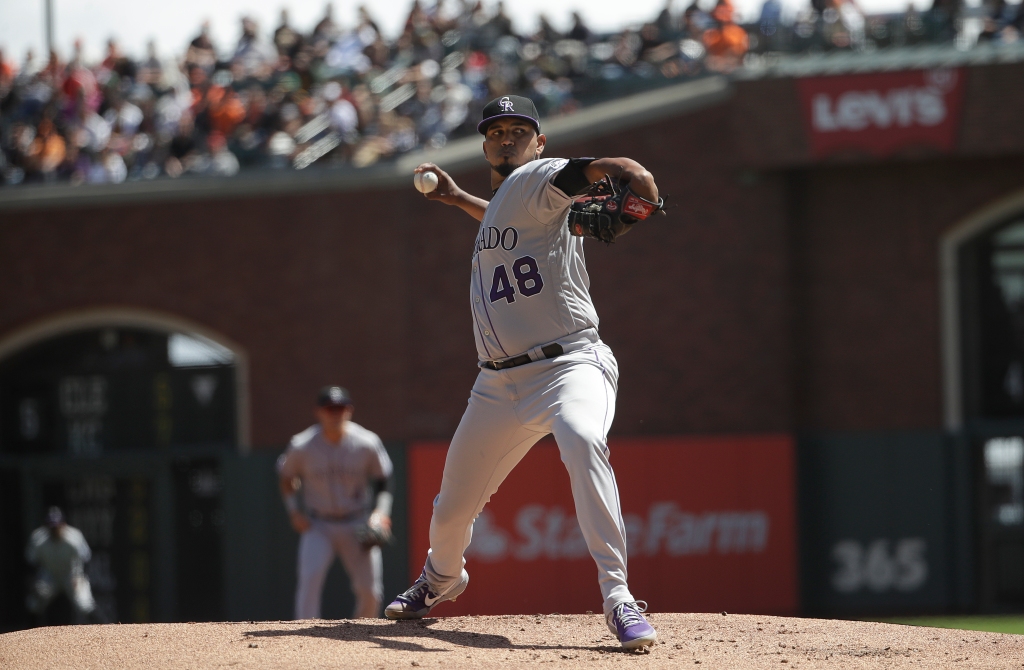 Like a curse from the baseball gods, just as the Rockies inched toward solving how to consistently pitch well at Coors Field last season, they lost their way on the road.

That left the Rockies pondering a familiar question heading into the offseason: How could they master the differences in pitch action at 5,280 feet elevation versus sea level, so that they could be effective no matter where they threw?

“We knew we had to make a switch,” right-hander German Marquez said. “We couldn’t just keep seeing the (contrast in collective road/home performance) and not do anything about it.”

The club’s latest answer is an analytics study into home/road variations in pitch movement, one the Rockies hope will make its 2021 road pitching performance an anomaly.

Away from LoDo last year, Colorado’s pitchers posted a bigger ERA (4.99 to 4.67) than they did at hitter-friendly Coors while also yielding a higher opponent batting average and lower weak-contact rate.

“We’re hitting this head-on more than we have since I’ve been here,” manager Bud Black said. “We decided this offseason that this is something we’re going to look right in the eye: This is why certain things happen to pitches on the road as opposed to at home.”

The physics behind pitching at elevation reveals the inner workings of the tall task facing the team.

At home, there’s been the three-decade pitching quest to find out how to tame the additional distance provided by the thin air at Coors Field, where a 400-foot hit at sea level turns into 420 in LoDo. Plus, there’s the majors’ biggest outfield to contend with, which provides additional opportunities for gappers and bloops.

That thin air is also the reason pitchers get about 18% less movement on their pitches at Coors, explained Alan M. Nathan, Professor Emeritus of Physics at the University of Illinois at Urbana-Champaign.

But the Coors Field effect is not equal on all pitches.

While fastballs have less rise and curveballs noticeably less depth, pitches that play more off of horizontal movement, like the sinker, split-finger and two-finger fastball, can still be effective in keeping the ball low in the zone and inducing weak contact on the ground.

“My sinker actually produces more ground-balls here (in Denver), which is good because that’s the profile I want as a pitcher,” right-handed reliever Justin Lawrence said. “And from (early results of the study) and some of my success here, it’s good to know that even though it’s sinking slightly less at Coors, it’s still sinking.”

To that end, over the last several years the Rockies have put an emphasis on getting groundball outs from current pitchers as well as acquiring pitchers with groundball tendencies (like Austin Gomber and Chad Kuhl). From 2019-21, the Rockies ranked tied for first in MLB with a 45.3% overall groundball rate. That rate was 47.0% at home (first) versus 43.4% on the road (ninth).

The quest to improve the groundball rate on the road, and overall pitching performance there, began in spring training when Black and pitching coach Darryl Scott brought the analytics project to the attention of the Colorado pitchers. Their initial proposal — and the prospect of adjusting certain pitches on the road — was met with open ears.

Analyst Ethan Moore led the project, but he announced his departure from the organization on Thursday. Baseball research manager Brittany Haby has also been involved, with oversight by assistant general manager of baseball operations Zack Rosenthal. The Rockies started by crunching all the data from last season on differences in home/road pitch movement, and are taking that approach into this year amid their second road trip.

“This has been well received by the (pitching) staff, because we get to see (the data) in front of us rather than experience what we actually go through as pitchers here,” right-handed reliever Carlos Estevez said. “They told us it was going to take a few weeks to get it down and really applied to this season, so right now it’s a little tinkering. Things are going to get a lot better here with (home/road splits) once we start seeing the data and learning more about (the contrast).”

In a still-young 2022 season in which the Rockies have only played four road games entering Sunday, that “tinkering” involves adjusting the aiming point on certain pitches.

“If you know your slider is going to lose this many inches, we can be more precise in how we change our sights rather than just looking at it as a straight feel thing,” Scott said. “Some guys really want all that information, like how he starts a certain pitch here at home, but on the road in San Francisco he starts it there.”

For example, Marquez is now equipped with the information on exactly how many inches more his curveball breaks in San Francisco than in Denver.

“I’ve got a lot of movement on the road, but (in Denver) the spin is a lot tighter with late action,” Marquez said. “On the road, it’s a bigger loop. You have to know how to control both. Now I have the exact numbers, we’re analyzing them, and I’ll get more (numbers) as we go.”

Ultimately, Scott argues, the pitch analytics aren’t out to change how the Rockies attack hitters. Rather, they’re focused on “making guys aware of what plays better where.”

“We’re not changing the arsenal, and now we’re not changing anything other than focus points at home and on the road,” Scott said. “Being open about it, and talking about it, it’s not an excuse (for road inconsistencies the last few years). It’s what’s going on, and it’s a mindset of, ‘Let’s make the adjustments (based off prior struggles) and use this to our advantage.’”