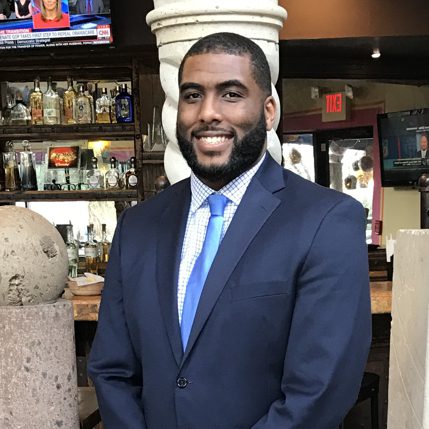 Joseph Swearington had been waffling on whether to pursue a master’s degree to propel his real estate career. The universe finally sent him a couple of signs. Sign one: his employer, CoStar Group, relocated its research department to Richmond, Virginia, and Swearington preferred to stay in Atlanta. Sign two: a few months later, he attended an alumni mixer at Georgia State, where he had earned a B.A. in political science and government. At the event, he hit it off with James George, a commercial real estate developer who serves on the Department of Real Estate Honorary Board at Georgia State’s Robinson College of Business. The two developed a mentoring relationship. And George wrote a recommendation letter for Swearington to include with his application to Robinson’s Master of Science in Commercial Real Estate (MCRE) program, which he joined last fall.

Swearington shows up for class in person, though the program also can be finished online. As part of Lynn McKee’s CRE Finance course, Swearington completed a project with five teammates, one who attends class virtually from South Korea. The assignment involved presenting an investment strategy to a mock bank board comprising McKee’s colleagues at Truist. Swearington’s team selected a real apartment complex in Miami, Florida, and chose to purchase, renovate, and hang onto the property.

“They said everything made sense from a numbers standpoint, and they enjoyed our presentation, illustrations, and before and after pictures of the renovation,” Swearington said. “We got an A.”

“We talked to the developers and partners to get an understanding of the approach they used and everything it took behind the scenes with different players to execute the vision,” Swearington said. “They broke down the plan piece by piece.”

Swearington currently works as an operations analyst at Angel Oak Mortgage Solutions, but he will join Truist as a commercial real estate analyst in mid-April. He attributes the job opportunity to Robinson; Lynn McKee is not only MCRE program director but also a senior vice president at Truist, creating a pipeline of talent from the school to the bank.

“I’ll be analyzing loans submitted by developers and ensuring it makes sense for Truist to approve funding from a business perspective,” Swearington said. “Students can capitalize on the relationship Lynn has established between Truist and Robinson.”