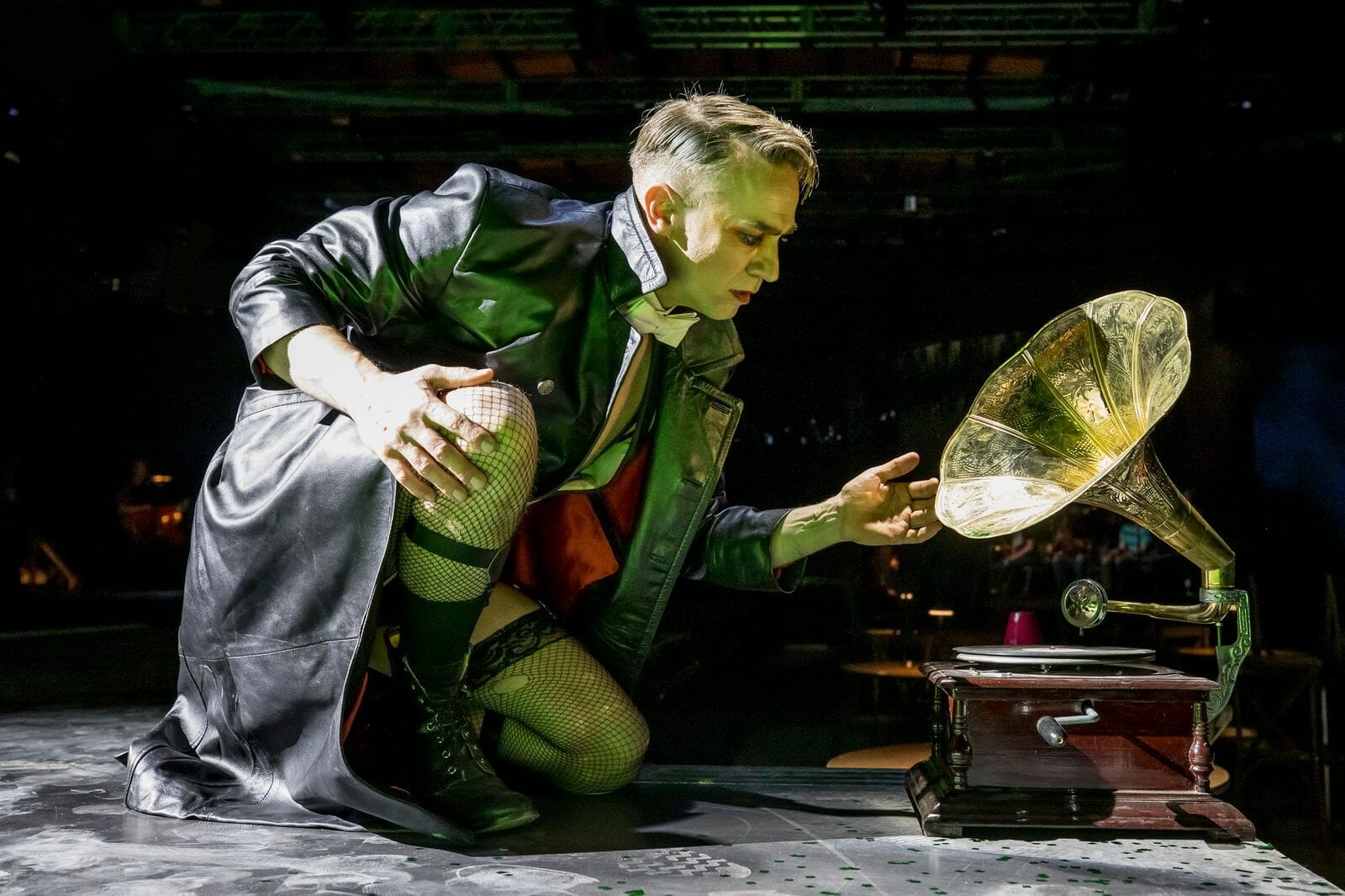 Known for its lavish sets, rich production values and innovative takes on classics, The Atlanta Opera has — over the years — tackled smaller, intimate work both as supplemental programing and as a result of Covid-19. Last year, for instance, the company staged The Threepenny Carmen and The Threepenny Opera under a big tent in the parking lot of the Cobb Energy Performing Arts Centre, the company’s normal venue, before they were comfortable enough to move back indoors.

Their current project is the Come as You Are festival, part of the company’s Discoveries series, featuring the opera As One (June 9 and 11) and a version of Cabaret, running through June 19. Both productions take place in Pullman Yards in Kirkwood, where the musical’s Kit Kat Club fully bursts to life.

As a musical, Cabaret has always seemed timeless, as potent now as when it first graced stages, with a book by Joe Masteroff and music and lyrics by John Kander and Fred Ebb. Its characters are iconic — the Emcee (played here by Curt Olds), who is the master of ceremonies at the seedy nightclub circa 1929 Germany; Sally Bowles (Aja Goes), a British performer more charismatic than gifted; and Clifford Bradshaw (Billy Tighe), a bisexual writer from America who is in Berlin to write a novel. Their lives intersect, as do that of Fräulein Schneider (Joyce Campana), who operates the boarding house where Sally and Cliff live, and Herr Schultz (Anthony Laciura) a shop owner who falls for Schneider — and is Jewish.

Directed by Atlanta Opera general and artistic director Tomer Zvulun, much of the action from the club takes place on a central runway, while other scenes (mostly at the boarding house) are on stage. Olds and the company get the production off on a high note with a rousing version of “Willkommen,” drawing the audience into the hedonistic lifestyle of its core characters.

It’s a busy production and one that is technically quite polished. Although the scenic design may seem a little skimpy at times, it works. The entrance to the Kit Kat Club, as the show opens, is shaped like a huge mouth, but as the more sinister second act begins, said entrance has morphed into a skull.

Erik Teague’s costumes are varied and innovative, from the lingerie of the Kit Kat performers to the period garb of ’30s Germany. In one musical sequence, the Emcee comes out wearing a tank. Cabaret is also abetted by Ricardo Aponte’s (also serving as the assistant director) choreography and effective projections on both sides of the stage courtesy of Nicholas Hussong.

Francesco Milioto conducts a 12-person group of musicians and their second-act orchestral version of “Cabaret” is one of the highlights of the entire production.

Virtually the entire cast makes their Atlanta Opera debut here. Olds brings an appropriate menace and uneasiness to the role of the Emcee, while Tighe captures the awakening of Cliff, in a strange land being seduced and pulled in different directions. In the role of Fräulein Kost, Deb Bowman is flat-out magnificent and anchors a wonderful version of the first act closer, a reprise of “Tomorrow Belongs to Me,” as the rise of Nazism begins. Yet the two most memorable performances are by Laciura and Campana, whose love is cut short by circumstances. Theirs is the most potent relationship in the production.

The weak link, alas, is Goes. The actress just never connects with Sally or anyone around her. The character is an enormously hard one to portray. Liza Minnelli shot to fame in the same role in the 1972 film version, but Sally is not supposed to be a standout performer. Her ambition clearly exceeds her talent.

Vocally Goes is more than capable — she delivers a haunting, measured rendition of “Maybe This Time” — but it’s really the only time Sally feels alive. Goes’ “Don’t Tell Mama” feels a little rushed and her closing “Cabaret,” too, is sung proficiently but rings hollow. The words should have some meaning here, as the character is making a stand to ignore what is happening around her, but they don’t have much impact.

Cabaret is staged often in Atlanta, both by in-town theaters and Broadway Across America. Locally, the last versions of the musical I’ve seen are a 2017 Serenbe Playhouse production and an exceptional 2016 touring version at the Fox Theatre with Randy Harrison of Queer as Folk fame. Reaching back a bit farther, Lea Thompson was one of the best Sallys I’ve ever seen, in a 2000 touring show.

With its history of excellence, The Atlanta Opera can face the challenge of having to meet and maintain its own high standards. That can’t be easy. This is the first production of the musical I’ve seen staged by an opera company and, some luminous voices aside, it doesn’t feel that much different than other takes I have seen. This version of Cabaret doesn’t have the distinctive stamp Zvulun has imprinted all over his other productions. Nonetheless, it’s still a solid version, with plenty of atmosphere, and its final sequence proves as powerful and chilling as ever.