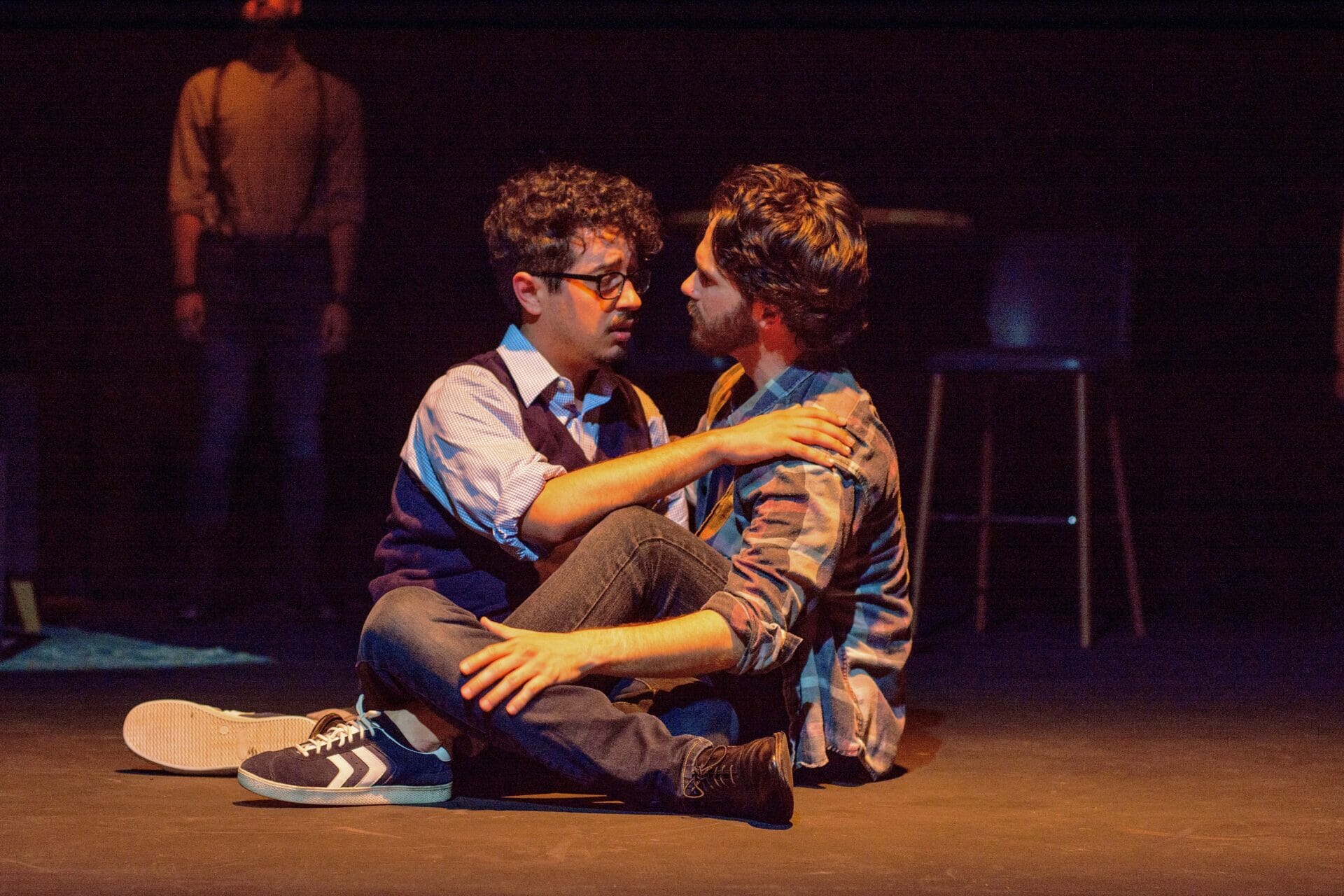 Not every love story is a swoon-worthy romance. In Out Front Theatre Company’s production of Homos, or Everyone in America, the gay relationship story is occasionally a tragedy, but too often a headache.

Written by Jordan Seavey, the play chronicles a gay couple’s ups and downs in Brooklyn from 2006 to 2011. It features lots and lots of arguments and clever bickering. The two central characters, who are unnamed, never stop bitching for long. We watch them as the story jumps back and forth to scenes over the course of their courtship, and they rarely seem to find any joy in being together.

Though it manages to be funny at points, it is not fun to watch.

The Writer, played by Tyler Sarkis, and the Academic, played by Niko Carleo, meet over Friendster and have a disastrous first date. Both of them are nervous, so the Writer decides to drink too much and get high, even though he can’t handle it. He vomits repeatedly in the middle of the bar, which causes the Academic to take the Writer back to his apartment to sleep it off.

They kiss the next morning, before the Writer can even brush his teeth, and this is the aggressively weird start of our central romance, which occasionally relishes being something brazen and potentially distasteful.

The title itself is a challenge to the audience, for it features a triggering word that can be conceived as a homosexual slur, even though we are all homo sapiens. This is the story of a gay relationship, specifically, but it is also a human relationship that reflects what happens when a couple just cannot find common ground.

Though these talks are blunt, they’re not charming. The audience is meant to be drawn in by the brazen, daring risks taken in the dialogue. But Out Front’s production places most of the audience at an unfortunate distance from the material.

Awkward staging decisions made by director Mandy Mitchell to fit the story into a larger space cause the play to lose a lot of its pacing, emotional urgency and even shock. The script calls for the play to be performed in the round in a very small space, like a black-box theater. Its 2016 off-Broadway production placed the entire audience on risers on two sides of a tight playing space, which made the show uncomfortably intense and personal, according to The New York Times.

Here, Out Front’s stage is a traditional proscenium, and most of the play takes place in front of the audience, elevated and at a distance. To concede halfway to Seavey’s up-close intention, Mitchell has placed a handful of seats for audience on the stage. But since most of the audience is seated normally, this approach doesn’t work. The larger audience watches the select audience members sometimes, instead of the play.

At one point on opening night, audience members on the stage began waving at the other folks staring at them. Since this happened during a particularly intense argument when the Writer and Academic fled the stage, it broke the necessary tension of the story, instead causing chuckles.

Midway through another quarrel, the couple walked through the auditorium and, pretending to cross streets, began talking to random audience members. This backfired during opening night. Attendance was sparse and spread out among the seats, which made the space between the couple and the audience feel cavernous, instead of intimate.

Since the script deals with issues that the gay community faced from 2006 to 2011, references are made to the Defense of Marriage Act and Don’t Ask, Don’t Tell, as well as random cultural references to 1980s New York Mayor Ed Koch. The timeline of the story is presented in fragments, though, so it’s frequently impossible to tell what time period the play is playing.

Beyond that, two other characters, played by Angel Fabian Rivera and Si Chen, show up for brief scenes to interact with and tempt the couple. But these characters don’t have much depth or definition.

Unlike the February staging of Bright Half Life at Theatrical Outfit, this shattered-timeline love story between these homosexuals isn’t as warm, engaging or romantic. Homos, or Everyone in America should feel as if you’re eavesdropping on a racy conversation; instead, the characters voice button-pushing bon mots from too far away. This renders matters ineffectual.

As the play heads toward a violent gay bashing,  the uncomfortable, darker turn makes it feel like a cliched relic. Audiences have long received these tales of gay suffering, abuse and death. Gay lives are richer than that, and audiences deserve those stories.

Among the cast, Sarkis and Carleo are attractive, but their coupling lacks fire. They rarely kiss and don’t seem driven with desire even when they’re speaking graphically about sex.

Sarkis is funny, and the Writer gets the script’s best lines. But since so many of the lines happen during fights, the wit feels drained due to the tone of the delivery.

Among the production’s technical elements, the lighting design by Beate M. Czogalla deserves specific praise. At the point where scenes begin to take place at a hospital, the lights onstage suddenly took on a track-lighting brightness, which underlined the severity of those scenes. It was a nice touch.