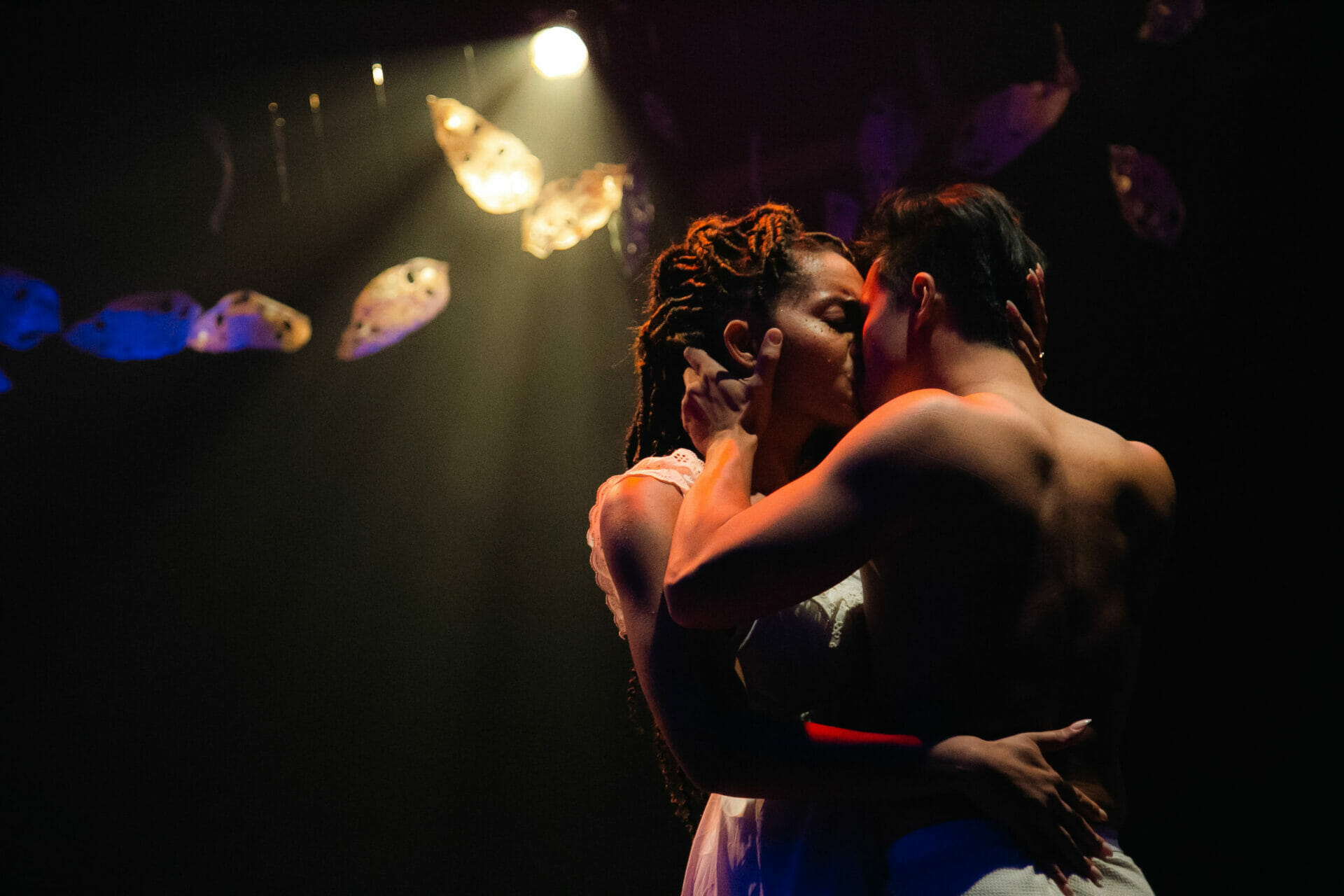 From the moment it premiered in Provincetown, Massachusetts, nearly a century ago, Eugene O’Neill’s Desire Under the Elms, playing at Actor’s Express through August 28, incited the Great Pearl Clutch heard around the world. It was banned in Boston and England. The first cast to perform the play in Los Angeles was arrested for “indecency.” It’s not hard to see why, given that many of its themes are still taboo. And yet, in this production, the question “Why?” comes up far more often, and for different reasons, than its creative team may have intended.

Set on a mid-19th-century New England farm, the story follows grieving and bitter 25-year-old Eben (Ryan Vo), who despises his 70-something father, Ephraim (Tim McDonough), whom Eben blames for his mother’s death. The cow manure hits the fan when Ephraim brings home his much younger, 30-something bride, Abbie (Precious West), who has plans to take over the place. To complicate matters, voila, there’s instant sexual tension between stepmother and stepson that turns them into trains barreling toward a fiery wreck. Additionally, the spectral presence of the dead mother hangs heavily in the air.

If you think this sounds like a Greek tragedy, it’s because that’s precisely upon what O’Neill based it.

O’Neill himself had a Greek tragedy of a life, one steeped in generational trauma and alcoholism. When writing this particular play, he was still reeling from the deaths, in quick succession, of his mom (a morphine addict he adored), his dad (who he resented but then turned into a version of with his own kids), brother and best friend.

There have been very few successful adaptions of this work over the decades. A movie version in the 1950s starring Sophia Loren, Anthony Perkins and (weirdly) Burl Ives bombed with critics. More recently, in 2009, there was an ambitious Broadway revival with Brian Dennehy, Carla Gugino and Pablo Schreiber that reworked major portions of the script and won critical acclaim but closed early because audiences didn’t dig it.

What’s strange is how Actor’s Express has promoted this production as if it possesses a kind of problematic sexiness akin to Marlon Brando’s Stanley Kowalski in A Streetcar Named Desire. Though West and Vo are immensely attractive, there’s not much steamy about Abbie’s “I’ll replace your Ma” line as she tries to seduce him. Even Mrs. Robinson didn’t do that.

Instead, it feels consistently predatory, especially since Vo always seems on the verge of a nervous breakdown. Meanwhile, it’s hard to tell what West is going for with Abbie, which is admittedly far from an easy, straightforward role. Near the beginning, she comes across as a kind of Disney villain, and even the sliver of a tortured backstory doesn’t suggest why she’s so bereft of empathy.

West’s limitations are especially noticeable at the play’s climax, as she stands inert and shouts, rather than embodying Abbie’s different levels of remorse and horror at what she has destroyed. We should feel some level of pity for her, at least. Instead, it’s like we’re a studio TV audience being shown a neon “Be shocked here!” cue card. Additionally, there’s little chemistry between Vo and West, which is an impediment when you have two characters willing to doom everyone, including themselves, just to touch one another.

On the other hand, McDonough turns in a skilled physical performance as Ephraim, the man whose face is, as playwright O’Neill wrote, “as hard as if it were hewn out of a boulder.” Already tall and thin, the Atlanta stage veteran conveys a man so filled with self-delusion and fury that he is literally being eaten away. He rails against people he considers too “soft,” failing to recognize his own frailty. He stomps around as if that will somehow scare away the oncoming disaster of his own creation.

Brian Ashton Smith and Jason Kirkpatrick also shine as Eben’s half-brothers from Ephraim’s first marriage who sell their shares of the farm to seek their fortune out West. Though they’re only in the first few scenes, they offer the production’s only intentional moments of levity, like an all-American Rosencrantz and Guildenstern.

On the inadvertently awkward front, without spoilers, the crescendo of this play involves one of the most strangely paced whoopsie-daisy moments I’ve ever seen — when one character realizes that they committed the wrong murder. It is delivered so matter-of-factly that I genuinely couldn’t suppress the Curb Your Enthusiasm theme from popping into my head.

This is not to be glib about the time and effort clearly invested in this production.
Beyond its misfires, including indecisive and often ineffectual direction by Freddie Ashley, there are many reasons that the script itself presents an inherent challenge to modern audiences. One of those is that, at this point, we’ve all seen far more incendiary, scandalous and emotionally authentic material.

The other thought is that perhaps O’Neill was still too much in shock when he wrote Desire. Maybe that’s why this feels grim but without stakes — and why it would take years for him to commit to page the actual heartbreak of self-sabotage and parental failure.

On a more positive note, the scenic design by Kat Conley is a wonder to behold, with audience seating sections on either side of the stage, which opens lengthwise, denying any privacy for the characters and offering each seat an intimate view into the melodrama. Ephraim and Abbie’s bedroom lies immediately opposite Eben’s, with only a suspended door as separation, ramping up the tension between the two boudoirs.

On either side of the stage are towering and claustrophobia-inducing stone walls that look almost like blood cells under a microscope. Whether this was intentional or not, it works perfectly with the theme of toxic bloodlines.

O’Neill indisputably was one of the 20th century’s greatest playwrights, winning four Pulitzers and the Nobel Prize for Literature in 1936. While he frequently drew upon the misery of his fraught family relationships and poured them into his plays — to transcendent effect in his posthumously published masterpiece Long Day’s Journey Into Night — one wonders if perhaps the grief was too fresh here to feel natural and resonant.

The overall mystery is how to bring his bleaker, more complicated work out in a way that feels as visceral as it did the day it debuted — and for a far more worldly and cynical audience. There are themes here around the intangibility of home ownership, misogyny, rural isolation and repressed sexuality that are certainly current. Alas, this is not the production to bring those issues to the fore.

Alexis Hauk is a member of the American Theatre Critics Association. She has written and edited for numerous newspapers, alt-weeklies, trade publications and national magazines including Time, the Atlantic, Mental Floss, Uproxx and Washingtonian magazine. An Atlanta native, Alexis has also lived in Boston, Washington, D.C., New York City and Los Angeles. By day, she works in health communications. By night, she enjoys covering the arts and being Batman.

A Statement On Our Institutional Values – Georgia State University News