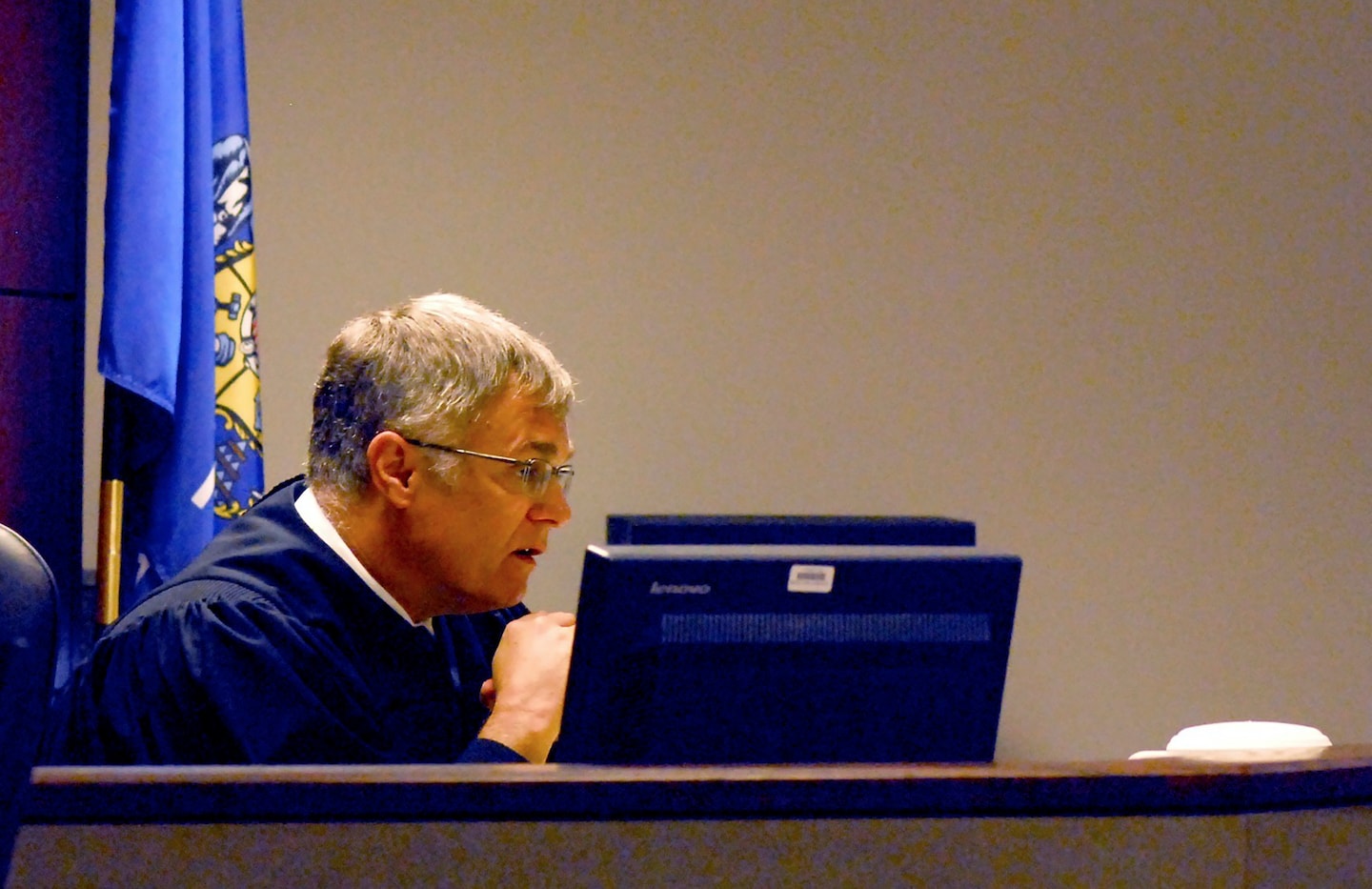 A retired Wisconsin judge was shot and killed in his home on Friday in what the state attorney general described as a “targeted act” against the judicial system by a man who also had several high-profile government officials as potential targets.

Wisconsin Attorney General Josh Kaul (D) said at a news conference that the Juneau County Sheriff’s Office received a call at 6:30 a.m. Friday about an armed man who fired two shots inside the home of a 68-year-old man in New Lisbon, northwest of Madison.

After nearly four hours of negotiations with the suspect, a tactical team entered the home, where they found the 68-year-old man dead and zip-tied to a chair, according to WISN. While Kaul did not identify the victim, the Wisconsin Department of Justice confirmed in a Saturday news release that John “Jack” Roemer, a retired circuit court judge in Juneau County, was killed in the attack.

When police went to the basement, they found the suspect, Douglas K. Uhde, with an apparent self-inflicted gunshot wound, officials said. Uhde, 56, was transferred to a hospital and is believed to be in critical condition, Kaul said.

“So far, the information that’s been gathered indicates that it was a targeted act, and the targeting appears to be based on some sort of court case or court cases,” Kaul told reporters.

State court records show that Roemer sentenced Uhde to six years in prison on a burglary charge in 2005.

Kaul said the suspect was apparently targeting other government officials, but they were not identified during the news conference.

“Those who may have been other targets have been notified of that, but we are not aware of any active threat to individuals,” Kaul said. “If we become aware of any specific ongoing threat, we will certainly notify people when we are aware of that.”

Zack Pohl, deputy chief of staff for Michigan Gov. Gretchen Whitmer (D), confirmed to The Washington Post that law enforcement notified the governor’s office that Whitmer was on the Wisconsin suspect’s list of potential targets. Whitmer was previously targeted in a separate case involving four men accused of plotting to kidnap her in 2020. A federal jury acquitted two of the men in April and deadlocked on the counts against two others.

“While the news reports are deeply troubling, we will not comment further on an ongoing criminal investigation,” Pohl said in a statement. “Governor Whitmer has demonstrated repeatedly that she is tough, and she will not be bullied or intimidated from doing her job and working across the aisle to get things done for the people of Michigan.”

Wisconsin Gov. Tony Evers (D) was also among those listed as potential targets for the Wisconsin suspect, according to the Milwaukee Journal Sentinel. Senate Minority Leader Mitch McConnell (R-Ky.) was also on a list found in the suspect’s vehicle, WISN reported.

Britt Cudaback, a spokeswoman for Evers, told The Post that the governor’s office does “not comment on specific security threats or the governor’s security detail.” Representatives for McConnell did not immediately respond to a request for comment Saturday.

No relative of Roemer immediately responded to requests for comment.

Wisconsin Supreme Court Chief Justice Annette Kingsland Ziegler said in a statement: “The state’s judicial family is shocked and saddened by this tragedy. Judge Roemer dedicated much of his career to public service in the law. … His work made a tremendous difference in the lives of many people in Juneau County and elsewhere in the state.”

About a year removed from the deadly Jan. 6, 2021, riot at the U.S. Capitol, a Washington Post-University of Maryland poll earlier this year found that about 1 in 3 Americans say they believe that violence against the government can at times be justified. The findings — which represent the largest share to feel that way since the question has been asked in various polls over more than two decades — offer a window into the country’s psyche.

1 in 3 Americans say violence against government can be justified, citing fears of political schism, pandemic

Acts of violence against judges and their families have come up in recent years. Daniel Anderl, the 20-year-old son of U.S. District Judge Esther Salas of New Jersey, was shot and killed inside the family’s home in July 2020 by a gunman posing as a delivery driver. Salas’s husband was seriously wounded in the attack.

After graduating from Hamline University Law School in Minnesota in 1980, Roemer served as an assistant state public defender in Baraboo, Wis., and was one of Juneau County’s assistant district attorneys for more than a decade, according to his biography in the Wisconsin Judiciary’s newsletter. He retired from the U.S. Army Reserve in 2002 with the rank of lieutenant colonel, his biography says.

Roemer was elected to the nonpartisan position on the bench in 2004 after defeating Dennis C. Schuh, an appointee of Wisconsin Gov. Jim Doyle (D). Roemer ran unopposed in 2010 and 2016.

The judge presided over some high-profile cases during his career. In 2009, Roemer sentenced Alan Bushey, the former leader of a religious sect in Necedah, Wis., to two years in prison for hiding the corpse of an elderly follower, who died of natural causes on her toilet. Roemer told Bushey in court that the case was “horrific,” according to the Associated Press. In 2017, Roemer granted Donald Coughlin a new trial after he was convicted on more than 20 counts of sexual assault because the judge ruled that a juror was not credible, Capital Newspapers reported. Coughlin was convicted in the second trial and sentenced to 48 years in prison, according to the Wisconsin Supreme Court.

But Uhde’s connection to the judge came years earlier. Uhde was sentenced to 10 years in prison and seven years extended supervision in 2002 in connection with an armed burglary. He won an appeal, but the decision was reversed by the state Supreme Court, according to the Journal Sentinel. When the case was reopened, Roemer was the judge who ended up sentencing Uhde to six years in prison in 2005, court records show.

Uhde, who escaped from prison in 2006, was eventually released in April 2020.

The early-morning call Friday was made by someone who fled the residence, according to the attorney general’s office, and contacted authorities from a nearby home in New Lisbon, about 80 miles northwest of Wisconsin’s capital. A neighbor told the Wisconsin State Journal that Roemer had been living in the home with two of his sons. The judge’s wife and another son died in recent years.

According to an audio dispatch from Juneau County Public Safety, a dispatcher detailed how a “caller says his neighbor’s son from across the street is banging on the door, stating that someone murdered his father.”

A firearm was recovered at the scene, the state Justice Department said in a news release.

The Wisconsin Department of Justice’s Division of Criminal Investigation is leading the probe into the killing and will be assisted by several state and federal agencies, including the FBI.

Wisconsin state Sen. Howard Marklein (R), who initially identified Roemer as the victim to local media, did not immediately respond to a request for comment. He expressed his shock to the State Journal about the killing in Juneau County, which is in his district.

“We never expect violent tragedy to strike in our small, close-knit communities,” Marklein said in a statement.

Donna Voss, who lives next door to Roemer, echoed that pain to the Journal Sentinel, saying how nice the retired judge was to everyone in the community.

“I still can’t comprehend it,” she said. “It’s terrible.”

An earlier version of this article misspelled the last name of Dennis C. Schuh as Shuh. This version has been corrected.