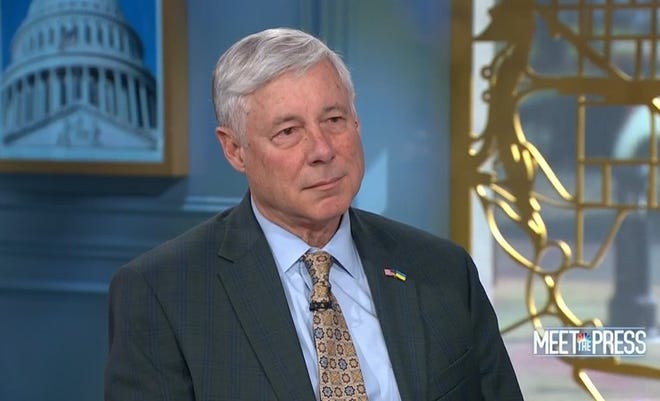 U.S. Rep. Fred Upton, R-St. Joseph, said Sunday that he believed Republicans would flip the Democrat-controlled House in the fall midterm elections, but the party may experience “troubled waters” if the majority it gains is a slim one.

Upton, Michigan’s most senior lawmaker in Congress, spoke during an appearance on NBC’s ‘Meet the Press,’ weeks after he announced his plans to retire at the end of his current term instead of running in the newly redrawn 4th District against U.S. Rep. Bill Huizenga of Holland who was endorsed by former President Donald Trump. Upton was first elected to office in 1986.

A Republican majority after the November elections may be slightly higher than the Democratic Party’s current margin in the House, Upton said, but it likely would not be a “wild swing” in the GOP’s favor.

Bipartisan cooperation, such as in the House’s Problem Solvers Caucus of which Upton is a vice chair, will then be “so important” as the next Congress deals with issues such as immigration, energy, inflation and the debt ceiling.

“It’s going to be an early, early test in the next Congress,” said Upton.

There are currently 221 Democratic and 209 Republican representatives in the House. If Republicans win back a majority but sit on fewer than 230 seats, the moderate conservative said, “it will be very hard to govern, for Republicans,” especially with the far-right element of his party with members like Marjorie Taylor Greene, R-Georgia, that he said is “really not a part of a governing majority.”

Upton was one of 10 Republican representatives who voted to impeach former President Donald Trump following the Jan. 6, 2021, attack on the U.S. Capitol, a move which resulted in death threats against him. He said threats of that nature would deter potential candidates, “good people,” from running to replace him and in other districts.

Upton also addressed Russia’s ongoing w Ukraine, stressing the need for the United States to help Ukraine and referencing a European trip he and representatives went on to meet with U.S. allies and Ukrainian refugees.

Chuck Todd, host of “Meet the Press,” then said it sounded like Upton thought “we can do a little bit more,” to which Upton responded: “We can.”